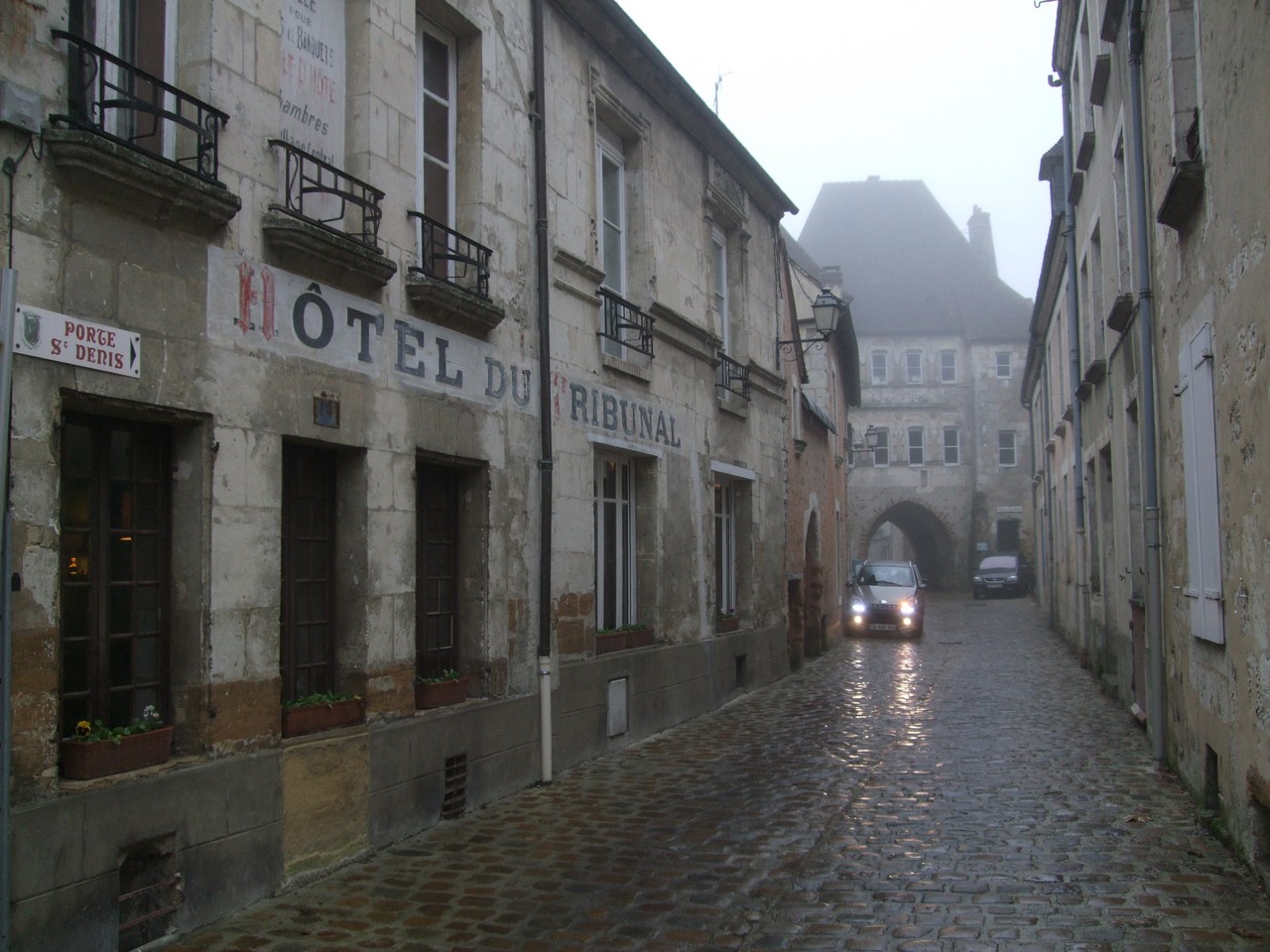 Oh my. This is a region that shines rain or...deepest fog

Londoners, perhaps more than anyone, can appreciate an area that is understated; where what’s good takes a bit of searching – but once experienced, rests deep in the memory.

And the Perche, a region in Lower Normandy, is one such place. Known – if at all – for both its cider-making and strapping Percheron horses, it lies within the department of Orne, a lost bucolic world of valleys and forested hills. On our visit in mid-November, burnt red leaves lined lanes without a single car on them.

Its food scene is not, admittedly, for the faint-hearted: if Dirty Burger is a patty too far for you, then the Perche is a sizzling innard. Things to expect? Boudin noir, kidneys, andouilles, rillettes, foie gras. Yikes.

We set out on a long weekend’s exploration via overnight car ferry from Portsmouth, a mini adventure in itself complete with berth and large window overlooking the ocean. Arriving at the port of Ouistreham at 7am, it was so dark and foggy that negotiating the ringroad around Caen was not without a bit of tension. 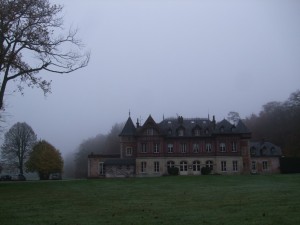 Once on the correct route, we stopped off for breakfast at Le Pavillion de Goffern (left), a chateau engulfed by mists, its grounds deep in autumnal colours. And then it was on to Mortagne-au-Perche, the region’s largest town, although the higher we climbed, the denser the fog.

But still, Mortagne is a scenic Norman town to wander, with its cobbled alleyways, stone houses and ancient monuments, especially on a Saturday morning when it’s enlivened by a busy food market. We peeked inside the cathedral, and at the Porte St Denis, a 15th century arch, before strolling the formal gardens behind the Hotel De Ville. Shivering, we sipped an obligatory café at the tabac.

We had been tipped off that La Vie En Rouge, a wine shop-cum-deli, was the place to warm up over lunch: inside its red walls, at a sharing table with a mix of French families, we enjoyed a mixed plate of charcuterie and hot boudin noir, so much softer and creamier than our own black pudding. After tasting the just-arrived Beaujolais nouveau (much derided, it seems, by most Francais) we were quickly given a Cotes De Rhone. The place was was so laidback, and so effortless, it made us think: is everything that’s hipster in London merely authentic in other countries?

Nearby Belleme – the tiny capital of the Perche – was more stunning architecturally but, on this damp November weekend, eerily quiet, its antique and interiors shops shuttered up. However, a meander through immaculate streets had its own charms and we tried to imagine the views despite persistent poor visibility.

It was time to bunker down in our chambre d’hote. We were booked in at Domaine De La Louveterie, near the village of Moutiers-au-Perche. Just eighty miles from Paris, it was built originally as the dwelling for the forest’s gamekeeper; long since enlarged, and with acres of grounds and a pool, it now attracts well-heeled weekenders from the capital. We were installed in the barn-like ‘Travel’ room, decorated with valises, old cameras, doors from Mali, and black and white newspaper snaps.

Owners Carol and Pietro are the classic story of city-dwellers stumbling across an area they had never visited – in this case 12 years ago – and deciding immediately that they would leave their jobs in Paris and make a go of it. So they bought the decrepit Louveterie, spent three years doing it up – and now swear that they would never return to their old high stress jobs.

Both nights of our stay we ate well. Dinner, cooked by Carol, was served around a wooden table with other guests in front of the roaring fire, each course matched with an appropriate wine: on the first evening we ate pumpkin soup with cream and parmesan, and a superb ling noir (like a coley or hake) with hollandaise and herb risotto. Even better was a foie gras the following evening, served with apple, white italian truffle, and accompanied by Pommeau (Calvados mixed with apple juice). In fact, apples feature heavily across menus in the Perche, and they were particularly fine slow-baked by Carol for dessert. But despite the richness of the food, modest portions all weekend meant we weren’t defeated; perhaps that’s why the French are slim.

On Sunday morning we explored, amidst intermittent rain, the neighbouring village of Moutiers. Taking a winding sunken path from the house, we crossed a bridge over the river up to the hillside church, recommended by Pietro for its frescos, carvings and gargoyles of wild dogs, their tongues hanging out. Most atmospheric was the cave-like utility room where lepers were once herded to prevent the spread of infection.

After all that it was time for – what else? – lunch. And there’s one tiny restaurant that is truly unmissable on a visit to the Perche. Maison D’Horbe is in the nearby village of La Perriere, an artistic retreat. It’s owned by three guys – an artist, writer and chef – its opulent interior a shrine to Victoriana, all oil paintings, taxidermy, and Regency-era furniture. You have to pass through an antiques shop and open kitchen to access the candle-lit dining rooms, and in summer, doors lead out onto a leafy courtyard with fountains. Pugs (and other dogs) roam freely (and, in a rather surreal touch, there are paintings of pugs in berets on the wall). 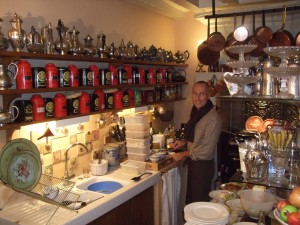 Wedged in between the objets d’art and austere gilt-framed portraits we enjoyed a long lunch of charcuterie and duck rillettes, followed by dishes of marsmallow-like rare beef and veal kidneys. Everything was presented on retro small plates, the emphasis on rustic presentation and big flavours. From a classic cocktail list we drank americanos to start, and then a Saint Emilion Grand Cru.

Afterwards we spotted a gallery across the road and were drawn in by the glow of a log fire. Its stone walls were covered in art, from drawings and scribblings to framed works, a dog or two lay sprawled on the chequered floor, and the bohemian artist-owners were smoking and sipping red wine.

This, it seemed, was the heart of the Perche, a secret within a secret. Like the rest of this intriguing, underrated region, it will remain deep in the memory – enshrouded, perhaps, in the inevitable blanket of fog.

The trip was provided by Normandy Tourism. For a range of ideas for holidaying in Orne in Normandy click here. Brittany Ferries offers return Portsmouth-Caen crossings from £89pp for a car and two passengers (Call 0871 244 1400). Domaine de la Louveterie (00 33 2 33 73 11 63) has a choice of suites with B&B ranging from £80-£140 based on 2 sharing. Each morning breakfast is a feast of local produce. More info here on Maison d’Horbe and La Vie En Rouge