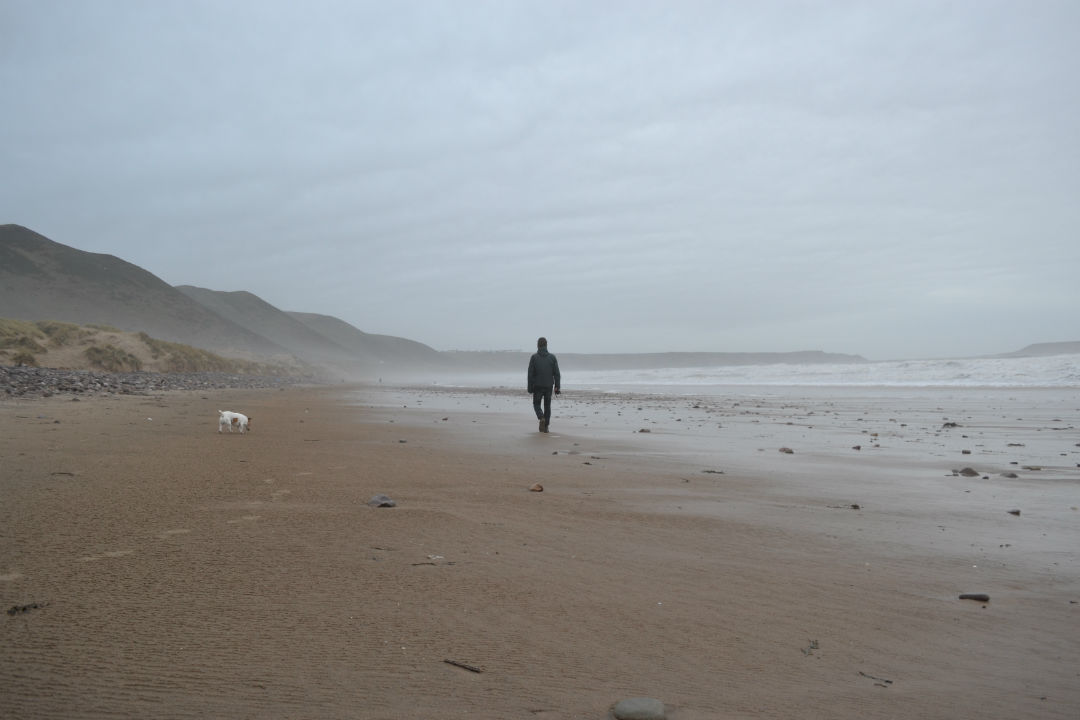 Brace yourself for the Gower peninsula, South Wales

The weather was wild, the scenery stunning - and the food alone worth a four hour car journey

On holiday, does splintering rain and howling wind have a transcendent effect on the mind and body? It was certainly a question we considered over the course of our wet weekend in south Wales, cheeks raw, bodies soaked, temples throbbing from wind.

And extreme weather was, of course, very much a theme the whole 48 hours we spent in Gower. Driving past Bristol, warnings on the radio advised against non-essential travel to the west country and Wales, amid further fears of flooding to match any that had already happened during a record-breaking January. But the hotel had been long booked, and, perhaps foolishly, we decided to press on.

Just beyond Swansea is Mumbles, a picturesque resort named after French sailors dubbed its twin islets mamelles (breasts). Climbing out of the car, the bay was shrouded in mist, and rain fell steadily as a handful of brave visitors flapped about in waterproofs. Meanwhile from the seafront cafe, pensioners, mugs of tea in hand, gazed silently out into the grey.

We scurried along trying to find somewhere to eat, past rattling masts on the promenade, and discovered upmarket brasserie Patrick’s – which proudly boasts of “20 years history” – nestled in an attractive parade (see review below) of restaurants. On a summer weekend, we concluded with a sigh, this strip must be jumping.

Mumbles is on the cusp of Gower, and the rain continued as we navigated the snaking lanes deeper into the peninsula, checking into our simple lodgings in the village of Llangennith (left), near the tip.

And then, around 430pm, stepping out onto the famous four-mile Rhossili Bay, something happened. The downpour stopped, light started to seep through the duvet of cloud, and a weak sun began to warm the sand. Light and movement was everywhere, a Lost World awoken; quite miraculously, a sunset burst its yolk into the sky, drenching the coastline in amber and burnt orange.

It was a rare moment of calm. For the remainder of the weekend, we witnessed every season rolled into one. Saturday morning saw the light go black before one torrential downpour after another, and the vast moors were bleak as we drove past skeletal trees towards famous beauty spot the Worm’s Head.

So named because this hump-backed series of rocks was first discovered by old Norsemen who named it ‘Wurm’ (the Dragon), it’s accessible for only two and a half hours either side of low tide. There are all sorts of myths about people getting stranded, including poet Dylan Thomas who, like everyone else, simply had to wait on the promontory for the water to go down.

We battled to the clifftop edge (not too near, mind), the sky bright, the wind so eye-wateringly strong that it almost lifted us – and our Jack Russell – along, spray crashing against the Head, sheep oblivious as they grazed vertically on the steep cliff. And then swiftly the sun slid away into sleet, and back again. Reaching what is normally the descent to the promontory, we realised it was submerged, due to the high water. It was back to the car.

And so we drove. To the inland village of Reynoldston, with its village green and Arthur’s Stone; to Oxwich Bay, with its castle (only open April-Oct); and finally to Port Eynon, where we experienced biting, slicing rain as we crossed the end-of-the-world beach, empty other than a lone windsurfer.

Mumbles is the place to head for a variety of food options, from acclaimed bistros like the Kitchen Table (626 Mumbles Road) to Patrick’s (638 Mumbles Road), a safe bet for something akin – but more relaxed than – “fine dining”. Lunch specials are around a tenner but we splashed out on a starter to share of mullet tempura (around £7) and saltmarsh Welsh rack of lamb with lentils (£20).

Hidden in the middle of the peninsula is Fairy Hill, a country house hotel set in 24 acres of lakes, woodland, and sculptures. Again, lunch is the best-value time to visit: £20 for two courses in the garden-facing dining room lined with Georgian windows. We enjoyed duck liver parfait and seared cod with toasted cauliflower, tickled nicely by a sauce of capers and cockles. Most outstanding, however? A starter of parsley pannacotta with roasted garlic and beetroot puree. We’d return for that dish alone.

Where to stay: The King’s Head

Accommodation was provided by the King’s Head Hotel in Llangennith, an isolated hamlet about a mile from the peninsula’s most famous beach, Rhossili Bay. There’s a pub, church (founded in the 6th century) – and surf shop. The pub, attached to the hotel, is hugely popular, and wildly busy, even off-season and in bad weather. Warming themselves around the stone-clad inglenook fireplace might be dozens of people, with every table for dinner taken by 7pm.

We visited on the night of their Winter Hunt Gourmet Evening and enjoyed some upscale dishes: seared wood pigeon with celeriac and black pudding tarte tatin, venison saddle with root vegetable puree and, best of all, duck breast on “sticky” sultanas with fondant potato. The regular menu has more classics on it, from fish and chips to local butcher’s sausages. Reasonably priced too.

Behind the pub and two minutes up the hill – from where you can see the sea – rooms are simple, spacious, dog-friendly and evoke a mountain retreat, all stone floors and white bed linen. Ground floor rooms have doors opening onto a simple front courtyard with hardy Mediterranean plants and a bench; solid bathrooms boast deep rectangular baths, perfect to soak in after being – you guessed it – drenched on the beach. Weekend rates from £95 a double. More info here.