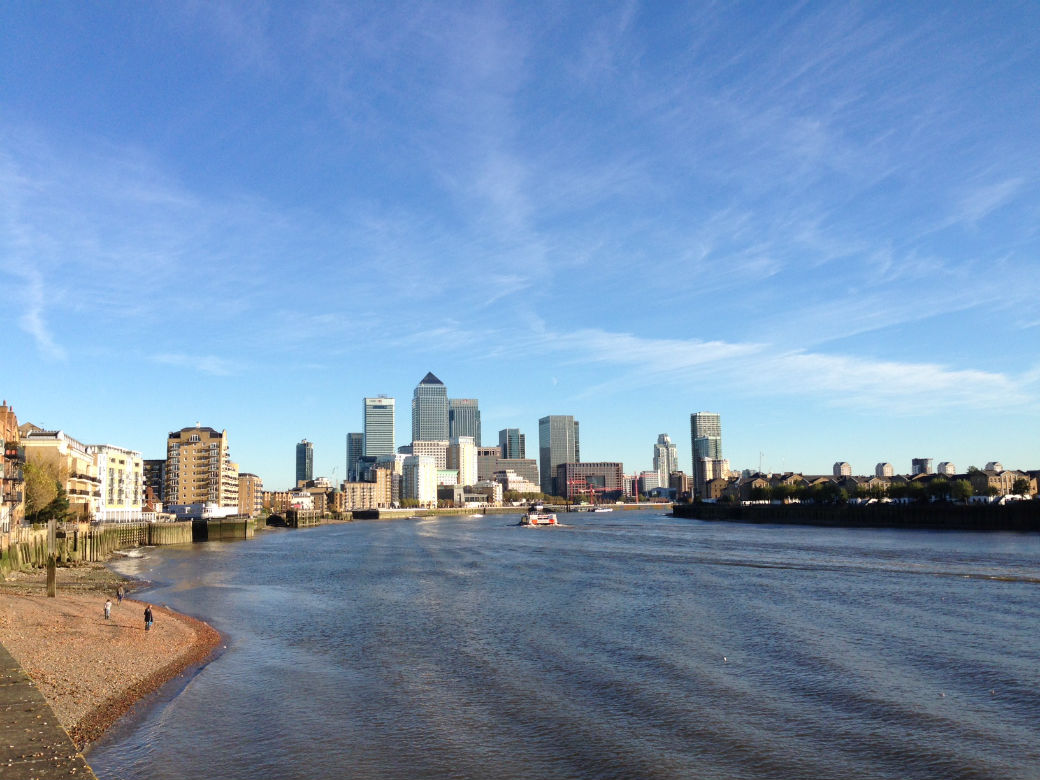 In the know: Stroll along the Thames to Limehouse

Walking through the capital on a sleepy sunny Sunday morning is a transformative experience.

I like to walk. You could, if you wish, call it flânerie. But however it’s dressed up, strolling through the city is meditative and always unregrettable (unlike, say, a packed bus). And on a blue sky Sunday morning, it’s even better.

The air is winter-crisp as we worm our way through the Camden Town hordes. Our goal? The nautical alleys and slippery sea steps of Wapping, and the wide open Thames at Limehouse, where we hope to bag an alfresco table at The Narrow pub.

Down Eversholt Street, past the strange parade of sex “transformation” stores and down-at-heel restaurants, we cross Euston Road and approach Marchmont Street, Bloomsbury’s central vein.  Blue plaques (including those commemorating Kenneth Williams, at 57, and Shelley, at 87) adorn almost every house; but there are also some intriguing temporary plaques installed to celebrate the street’s more ordinary former residents, part of this year’s Bloomsbury Festival (and a little like our own experiment with blue plaques in the summer).

After snaking round Lincoln’s Inn Fields, and getting lost in the closed alleyways, chambers, and offices of Temple, we’re spat out into bright sunshine bouncing off the river. Here the flow of drifting pedestrians is tangible; our Jack Russell, excited by the watery smells, chews at the lead impatiently.

The tide is low and the pebbly river bed exposed: tourists and families potter, examining objects, crouched over what they hope are finds, relics from a maritime past. Huge river boats glide by, tourists waving, ripples splashing onto the shore.

We pass the Millennium Bridge, ants scurrying across, and weave around Tower of London, before pretty St Katherine’s Dock appears, with its wooden-slatted pubs and clink of alfresco cafes. The language around us is a myriad different voices; it’s like a northern European outpost; or even a Canadian town.

The riverside is, of course, marked by endless new apartment blocks with their deserted riverside balconies and empty loungers: who lives in these, we wonder? Who is lucky enough to spend evenings soaking up the sunset with a glass of wine?

Wapping High Street is signalled by medieval boozer the Town Of Ramsgate, with its tiny saloon bar and rickety wooden terrace right on the shore. We stop for a pint, and contemplate the condemned pirates who, many centuries ago, were chained to the post on the “old stairs” and left to drown as the tide rose.

In fact, the first pub on the site, The Hostel, probably originated during the Wars of the Roses in the 1460s. Its current name came about after the Kentish fishermen who landed their catches at Wapping Old Stairs to avoid the river taxes imposed higher up the river close to Billingsgate.

We’d like to have popped into atmospheric art gallery and restaurant the Wapping Project – sadly now about to be sold – but alas our dog precludes such indulgence, and so we press on, past the Prospect of Whitby. Finally at The Narrow, we grab the last waterfront outside table in full autumnal sun.

At one point, when Gordon Ramsay could do no wrong, this was a famed pub. But, wonderful location aside, how things have changed. The burgers (a whopping £14) are overdone, served with a scant handful of chips. While the patties have good flavour, the dry buns disintegrate messily. A starter of cured salmon and horseradish is devoured after three hours on the road, but it’s fridge-cold. Sometimes it really is better to travel than to arrive.

But still: the sun is almost hot in mid November, and we linger over a large glass of house red, before heading back to Wapping Overground, with a brief stop at chic bare-brick bar Victualler en route.

And then, without an ounce of drama, the orange line whisks us back to K-Town in less than half an hour; and the sparkle and mystery of watery London are, in fact, history.

For the less hardy or more time-pressed,a shorter alternative is to take the overground to Blackfriars and walk east from there.