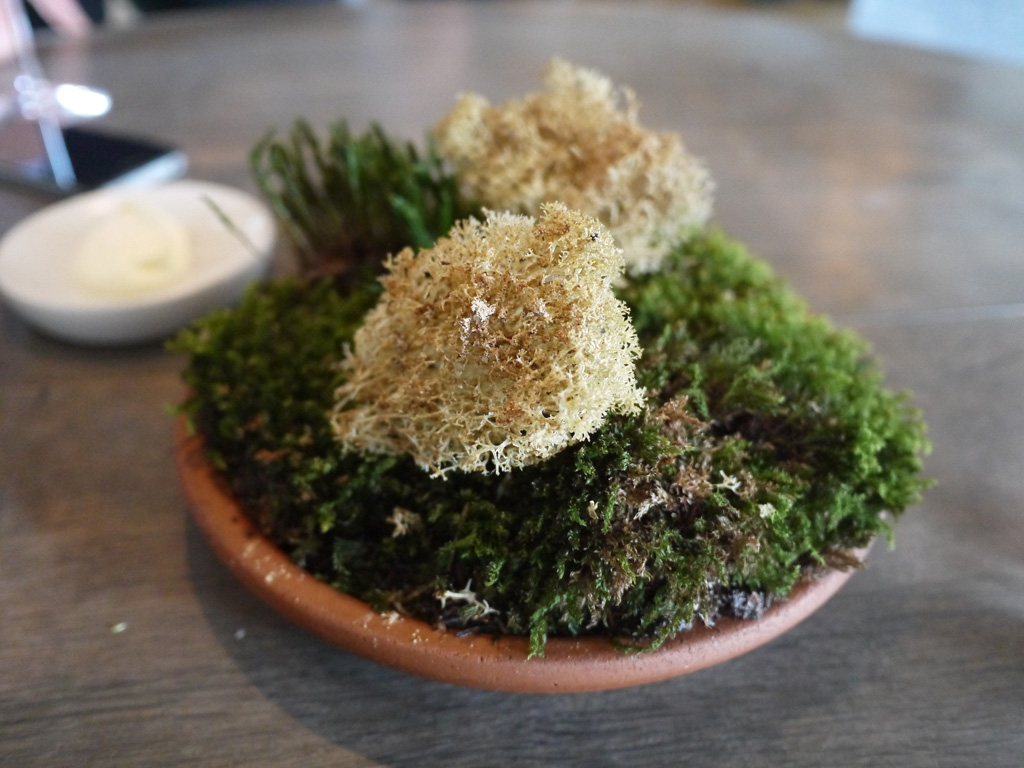 Second best restaurant in the world, so the critics rave. Sarah Fox picks her highlights from a whopping 20 courses

I was on the phone the second the lines opened to bag a table three months in advance at Noma, generally considered the world’s second best restaurant.

Head chef René Redzepi forages and sources strictly Nordic ingredients to create his menu of 20+ courses – and one that banishes pepper and olive oil, instead serving up sea urchin, ants and bee larvae.

Here are my top 5 dishes from what was an unforgettable dining experience. And don’t miss two additional eating tips for smaller budgets in one of Europe’s best dining destinations.


Festively named after its cervine habitat, the reindeer moss is deep fried to a texture so brittle, it was difficult to hold without it crumbling. Sprinkled with cep dust, it tasted of a salty, earthy forest.

The Nordic banquet opened with these rather comical looking kohlrabis. The inside had been hollowed out and a dry refreshing juice had been poured inside. Described as a “Nordic Coconut”, our waitress encouraged us to drink the liquid through the twig straw; none of that stuffy fine dining army of cutlery here.

Nothing is as it seems at Noma and that is particularly true of their adaptation of Æbleskiver, normally a traditional Danish spherical apple pancake. The apple was swapped for bitter steamed green veg and the ball was painted in an Unami grasshopper glaze and sweetened with bee larvae. Absolutely delicious, the savoury hoppy insect literally making our mouths water, MSG style. Their secret? Noma don’t let on about the bugs until it’s all gobbled up.

Noma do playful, theatrical presentation without being tacky – and this course was a real show-off. Hidden inside a larger egg shell on a bed of hay were two poached and pickled quail’s eggs. The lifting of the egg’s lid was followed a smoky, woody waft. “Just pop them in your mouth whole,” said our waitress. We obeyed and the white burst, oozing a thick flood of savoury yoke.

A blueberry, avocado and ant sorbet sandwich: the formicine addition wasn’t mentioned until we were given the list of ingredients with our bill; so sneaky. A deep purple sorbet was sweet and smooth, sandwiched in between wafer thin “bread” that was salty and tangy, each one slotted into a beautifully crafted origami envelope. On the side was a bowl of nasturtium leaves to be placed on the tongue after each bite of the sorbet sarnie, their lemony flavour enhancing the tart pud.

For more info on Noma and booking a table head here.

Two other restaurants to try

The newest opening from Cocofo, a popular restaurant group in Copenhagen. If Noma is out of your budget, or most likely, you can’t nab a table, Host is a (slightly) more purse-friendly Nordic option. At £30 a head, the three course menu with a few extras thrown in included an intensely ‘shroomy cep soup palette cleanser. A highlight was the oxtail and beef, with a bouffant of bright pink shredded beetroot. There’s some theatre thrown in too: lobster arrived accompanied by a burning sprig of juniper whose piney smell transports the diner straight to December. Norre Farimagsgade 41, Copenhagen 1364

Bevars is a neighbourhood cafe at the foot of Ravnsborggade, the street home to vintage Danish Design. First find yourself an original Jo Hammerborg light; and then celebrate with a coffee and a homemade rum truffle here. The truffle was extremely chocolatey and made dense with oats. The interior? Not letting down team design Denmark, this cafe is white and wooden with bespectacled locals in knitwear occupying the seats, tapping away at their laptops. Lights dimmed, it turns into a homely bar come nightfall. Ravnsborggade 10 B, 2200 København, Nørrebro

Sarah found an apartment for around £80 a night on Air B’n’B. Flights to Copenhagen on Norwegian airlines start at £39 return.