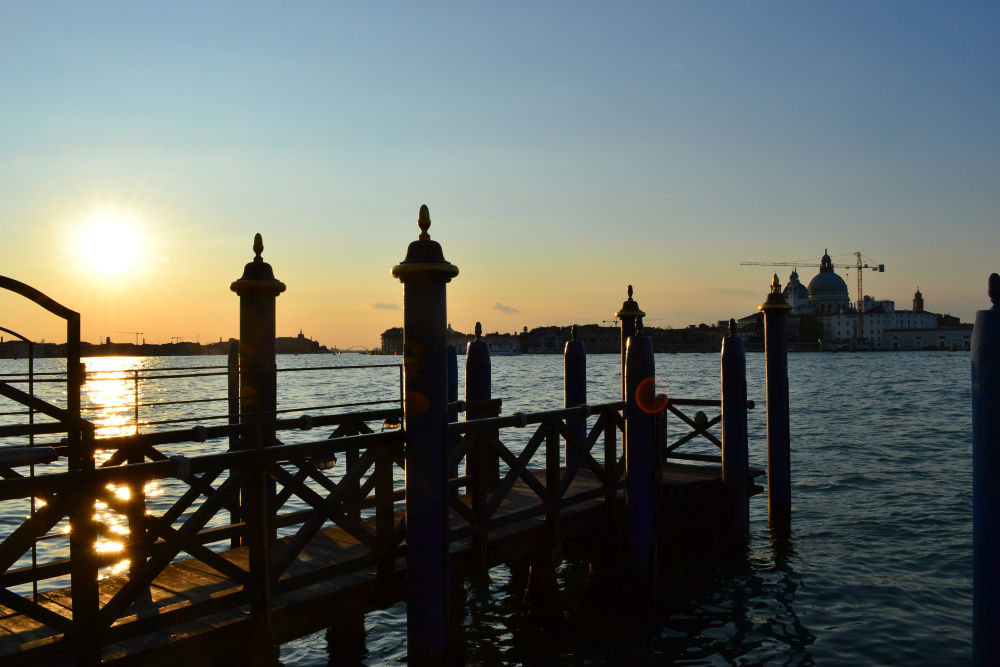 By the time we left Venice we’d experienced all weathers. Bright sunshine bouncing of the Grand Canal, gloop-grey skies, biting winds, and finally, incessant rain (so much so that St Mark’s Square flooded, and the wooden platforms came out).

Like most visitors, perhaps, I hoped at least try to uncover something of the “real” city. I’d been once before, over a decade ago, whizzing round the tourist sites, fuelled by bellinis and overpriced tourist set menus.

But London’s current Polpo-inspired passion for cicheti (little Venetian bite-size snacks) made me want to return to explore the cheap backstreet bacari, the wine bars and cafes frequented by locals. And throw in a few contemporary art galleries while we were at it.

The best way to the city from Marco Polo airport is the vaporetto, or water bus. Take the ‘blue’ line to St Mark’s Square; not exactly cheap – 27 euro for a return trip per person – but a hell of a lot less than the 110 euros demanded by the water taxis.

Once at sea, the bump and crash of the lagoon requires stronger sea legs than you might expect. It makes a dozen stops from Murano to central Venice, taking a leisurely hour and a half.

We were staying on Giudecca Island which overlooks the St Mark’s Square basin. Giudecca was once the city’s industrial suburb, where vaporetti were made, along with an asphalt factory, flour mill and distillery; in the renaissance, wealthy aristocrats built their villas there.

We dismounted on the dock beside our hotel, the Bauer Palladio, an imposing former convent with striking cupolas, designed in the second half of the 16th century by then world-renowned architect Andrea Palladio. Before its conversion to a hotel and spa it had been, quite unbelievably, left abandoned for over hundred years.

Our room was a mezzanine with huge windows right on the water, the pleasant splish-splash of the tide audible morning and night, as if we were actually afloat. It’s a spacious place: gardens, spa, cloistered corridors, a courtyard that would be gorgeous in the summer, and a vast living room with fireplace that more than sufficed once the cold night had set in.

Blissfully, the sun blazed as we perched with that first Campari spritz outside a little bar next to the hotel, admiring the industrial view to one side and the classical city across the water, the sound of distant bells tolling. As it set the sky turned cerise, while boats of all shapes and sizes glided along, their ripples splashing over the harbour edge.

Before losing ourselves along backstreets and tiny canals in our bacari hunt, we battled the camera-wielding brigade a) drinking spritz (made from either Campari or Aperol, white wine and soda) at Caffe Florian, the famous cafe in the colonnade on St Mark’s Square, b) at the Accademia gallery, with its paintings from Carpaccio, Giorgione, Bellini, and Tintoretto and c) atop San Giorgio campanile, which boasts the best views over the city.

Even out of peak season, the boutique-lined streets around San Marco were choked with pedestrians – although it was only when we left Venice that we came to the pleasant realization that we hadn’t heard a car for three days.

Just walk, and walk; the tourists soon fall away. It’s advisable to cross the bridge into Rialto, arguably the heart of the city, as soon as possible. Its vast and buzzy market, patronised by real Venetians, in particular the Campo della Pescaria, is alive with stalls of colourful vegetables – and fish.

And don’t miss Campo San Polo, the largest square after San Marco, Campo San Toma, with its bustling Saturday antiques and junk stalls, and the Dorsoduro district: Campo San Margherita is its heart, the antithesis of St Mark’s Square and almost entirely a space for locals to socialize.

On our last morning, the weather had turned. We leant out of the window of our second hotel, the tiny Galleria, mesmerized by slanting rain, and the rise and fall of umbrellas over the Accademia bridge. Industrial boats chugged by, grim-faced men in waterproofs at the helm. The Grand Canal bubbled and swirled. As we dragged our cases across St Mark’s Square the downpour quickly flooded pavements. Well-adapted locals, all clad in wellies and wielding mammoth umbrellas, hurried to their workplaces – and by the time we were on the vaporetto to the airport we could hear the siren sounding for acqua alta.

Aided by Russell Norman’s Polpo book we set out to tick off a few bacari – those hidden backstreet wine bars – on an enjoyably boozy Saturday afternoon crawl. Cicheti – bite-size tapas-style snacks made with eggs, olives, seafood, meat or vegetables – do vary in quality but are reliably good at the places below:

Spritz are ubiquitous and vary hugely in price in Venice. If you like a sweeter drink, ask for Aperol; bitter, go for Campari. In a basic bar without any pretensions they hover at 2-2.50; in bacari around 4 euros, and up to 12 in posh bars and hotels. All’ Arco is hidden away behind the fish market and probably the best bacaro we tried. It’s miniscule; just enough room inside for a press of eager punters in an ill-organized queue. Foresti – rosy cheeked young out-of-towners – flock here; on our visit gangs of what we might call stag parties were all whooping it up over prosecco or Campari. Corks popped as we tucked into three rounds of cicheti (see pic above), the best of which was their signature creamed salt cod. San Polo 435, Calle dell’Occhialer (Cost: 3 rounds of cicheti & 2 campari spritz – 14 Euros).

This has a ye olde worlde feel, dating back – rumour has it – to 1462. It’s an atmospheric corridor, again standing room only, from whose ceiling copper pots and pans dangle. Quiet on our arrival – we assumed it was suffering due to the success of nearby All’ Arco – but soon a heaving sea of puffa jackets, and those excitable, tipsy foresti. Cicheti isn’t as good as its rival, the bread noticeably soggier, but still some sharp flavours. Think anchovy, egg, sardines.  San Polo 429, Calle dei Do Mori (Cost: 2 prosecco & 3 cicheti 17 Euro)

On the fringes of Rialto’s fruit ‘n’ veg market this is nothing more than a hole in the wall, but it was again rammed with folk on their Saturday afternoon bacari crawl. More sandwiches than cicheti but still worth a visit as it forms a triangle with the first two on our list. San Polo 213, Campo Bella Vienna (Cost: two glasses Sauvignon 7)

A tiny caffe on Campo San Margherita which buzzes with serious-looking hipster types all drinking a spritz (just 2.50), It wasn’t the friendliest place out of the six, but no matter; a great terrace to people-watch from too. Well worth a visit. And it was the inspiration for Polpo. Dorsoduro 2963

It’s a wine shop, really, but the cicheti cost just one euro each and it’s right on a picturesque section of the canal. We ate tuna and anchovy with pickled onion, and mozzarella with asparagus. Dorsoduro 992, Ponte San Trovaso

Bar Paninoteca
Tucked away behind the waterfront in Giudecca is an authentic bacaro, its interior 70s chalet cabin-style with jackpot machines, cheesy euro pop and wines at a single euro (our Bardolino was 1.50). Throughout the friendly owner sat crocheting a jumper in the corner. Pizzettes were .30 and unctuous arancini balls with melting mozzarella just 1.30. Campo Marte 54 Giudecca

This seductive osteria on Campo San Margherita is highly recommended. Its interior is brick and wood, candles flickering, with Murano chandeliers and handwritten menus. The waitress speaks only in Italian, and several dogs roamed around – one, it should be pointed out, in a diamante collar – or lay sprawled on the chequered floor. Can seem confusing at first (do you order a the bar or take a seat?) and sooo busy on a rainy Sunday evening that we wondered if it was worth fighting for. Yet it was probably our best experience of the weekend: the buzz of animated Venetians, the rhythmic slicing of charcuterie, cicheti sharing plates – prawn with swordfish, marinated sardines, anchovy, creamed salt cod with different flavours, beef carpaccio. 80 euros for dinner and wine. Campo S Margherita 2930

The Giudecca waterfront is now peppered with galleries all along, so much that some are calling it the ‘Soho’ of Venice. It certainly feels more authentic than many other parts, and at Tre Oci celebrated Italian photographer Gianni Berengo Gardin has a retrospective in another of Giudecca’s atmospheric waterside palazzos.

Catch his evocative images: Venice in acqua alta; a child skipping in a backstreet; a regatta; and famously, a car with a couple overlooking sea. Thought-provoking pictures filmed inside mental hospitals and gypsy camps too.

Dorsoduro’s Calle a Gregorio is an appealing narrow stretch of galleries and scenic canal bridges which throws out the visitor in front of Santa Maria Della, visible from across the whole city. Next door is another prominent late 17th Century building, at the point where the Grand Canal and Giudecca canal meet, a customs house until mid 1990s redeveloped as a contemporary art gallery in 2009. The interior is a beautiful minimal space of wooden beams and red brick and, on our visit, boasted a fine international roll call of names: too many to mention, but suffice to say Donald Judd, Jeff Koons, Paul McCarthy, Roni Horn, Bruce Nauman and, particularly, Edward Kienholz.

Accommodation was provided by the Bauer Palladio Hotel & Spa on Giudecca. The former convent has 50 bedrooms, private gardens and breathtaking lagoon views, whilst the spa offers a range of therapies and massages.

Too expensive? Try Hotel Galleria
Venice is mightily pricey for accommodation, and here we had a slither of a room for 105 euros a night, slightly confused staff, and views right on Grand Canal.

There are plenty of cheap budget deals online, but we flew with BA, around £225 per person when booked 4 weeks upfront.