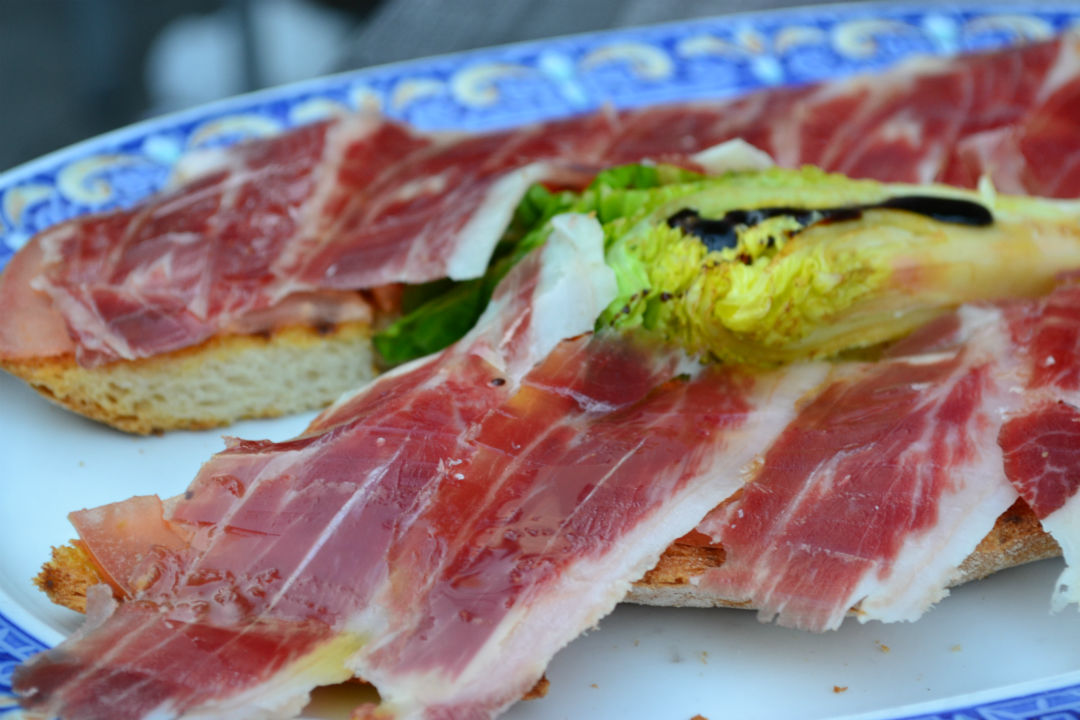 In the second of three reports from Andalucia, we head from Malaga to Seville to discover where to find the most perfect bite-size edible

Like Venice’s bacari, I’d never toured the tapas bars of Seville, the home of the bite-size edible. And as an admirer of London tapas joints, the raison d’etre of the visit was simple: to find some that equalled the best we have here in our sharing plate obsessed capital.

Once you’ve conquered any tourist map-reading phobia (yes, GPS should be switched off, you’re on holiday), Seville’s narrow streets make a relaxed, cool place to wander. Barrio Santa Cruz is the ancient, and now, very touristy heart. Neighbouring Centro is all about shopping and eating with the locals in and around the Alameda de Hercules. To its north is La Macarena, a poorer district whose ancient Moorish walls are still in tact. And hop over the river Guadalquivir and you’re in arty Triana, home to the one of the most impressive modern art galleries in the world – the CAAC, housed in an ancient monastery.

It goes without saying the city has culture in spades; feel free to queue up with thousands of other tourists patiently waiting in 40 degree sun for the Cathedral, Museo de Bellas Artes, the various palaces and Alcazar. As fans of all things Moorish, and with only 48 hours here, we chose the latter (and pretty much strolled straight in at around 3pm on a Monday afternoon). Seville was conquered by the Moors in 702, and later tribe the Almohads rebuilt the Alcazar in 1147, as well as the towering Minaret on the Cathedral. Wander through the tiled palaces, courtyards and vast ornate and simple rooms to gardens so large and dripping with bourgainvillea they justify the entrance fee alone.

Sierpes bleeds into Amor de Dios, one of our favourite shopping stretches, with vintage and interiors shops and the Redhouse, which does “art and food,” its shabby chic interior filled with coffee, laptops, wine and serious-looking locals. Keep walking and you’ll come out at Alameda de Hercules, once a swamp, but converted in 16th century to become a promenade. After a more recent stint as red light district, it’s now – inevitably – a hipster destination crammed with bars and restaurants, and a vast square where locals wander, chat and kids run around, swallows swooping and diving. And just north, on Calle Peral is an ace junktique shop with lots of religious kitsch to recreate that “Sevilla” look at home.

We had such limited time in the city that we had to be selective, plumping for the CAAC over the more traditional Museo de Belles Artes. Located across the Guadalquivir, a riverside oddly like the Thames at Kingston, complete with rowers, it’s a very different part of Seville: weed-strewn ground, lovers arguing by a car, shirtless boys fishing, and an extraordinary litter-filled burnt out park peppered with shacks.

The heat intensified – 40 degrees plus – as we continued to the Contemporary Art Gallery, housed in a former monastery dating back to 1400, restored in 1992 for the EXPO as a cultural centre. It’s a memorable setting, with hundreds of artists exhibiting, from both its permanent collection as well as temporary exhibits, perfectly juxtaposing cutting edge art and medieval architecture. Artists we rated on our visit? Cristina Lucas (pictured), Francis Bacon, Al Weiwei.

Seville is so rammed with places for a caña, it’s hard to make suggestions. But try Alameda de Hercules – a buzzing strip of bars, or a tad further north, two fun places to end up at (near the hotel too) are Bar Alfalfa, a corner joint (c/Candilejo 1 Plaza Alfalfa) with hanging hams and a tiny cucina, or the more quirky Bar Garlochi (c/Postero 26), half funeral parlour, half gypsy caravan rammed with images of Virgin Mary, Greek mythology and oil painting collage. The owner shuffles about irritably saying “no photos” and there’s a bizarre mix of tipsy tourists and locals.

In La Macerena try Bar Tolina on Moravia /juzgado – a shady square basic bar, where you’ll see locals sucking plates of caracoles – little snails. Or for a sundowner head to River Aqua Terraza, a tacky but fun cocktail bar on a boat, perfect to watch the sunset to easy listening Queen cover versions and Spanish classics, as canoes and rowing boats glide past.

Spain is a cheap place to eat out, with tapas around €2-2.50 upwards and wine often €2 or under a glass. A small beer (caña) is often €1. Before we left home, we did a bit of research to see which tapas bars kept coming up online. And the two that featured highly everywhere from food bloggers to, er, Tripadvisor were El Rinconcillo and Dos De Mayo, both in the Centro area. So let’s start with them.

Plaza Los Terceros is a lively square to head to once you’ve gawped at the main sights in Santa Cruz. The bar with all the outdoor seating is Huerta Mediterranea, a veggie tapas specialist, and the square is rammed with ancient little places like Los Claveles, some with a view down to Santa catalina and San Pedro church. A croquette’s roll away is the famous El Rinconcillo (c/Gerona), the oldest in Seville, dating back to 1670. On a Tuesday lunchtime a mix of locals and tourists filled the place up almost immediately after opening, its interior all bathhouse tiling. Try the salmorejo (a cold tomato soup with chopped up ham, egg and tuna, €6) or some Jamon Serrano (€5.50). Solomillo (little tender pieces of pork loin) were €2.80. Don’t be tempted by the nearby La Giganta, a more modern-looking place that served us a horrid tuna tartare (cold and wet).

Down on leafy Plaza de la Gavidia, nearer the Guadalquivir, we arrived just in time on a sweltering afternoon (it had hit 40 degrees once again) at Dos de Mayo, a famous corner bar with characterful interior, large terrace and staff who are military in their precision and efficiency. Michelin stickers from recent years crowd the window, including 2012 ones, so we expected good things. And the one dish we ordered was perfectly executed, if packing just a little less flavour than expected: acorn fed Iberian ham with tomato and oil (€8.50) was good but not necessarily better than other cheaper places. Don’t forget to order at the bar, give your name and they shout when the food is ready until you claim it.

Other names that kept on coming up in our research? Taberna Coloniales, on Plaza Cristo de Burgos in Centro, all azulejos (Moorish blue tiles) and green wood, set in a beautiful leafy square. Perched on stools at the counter, we watched the burly chef carve huge sides of Iberican ham. We chose vegetarian dishes: carrots with thyme, oil, garlic and lemon were wonderful, peppers grilled and stewed in oil even better mopped up with ubiquitous pan. Just €6.80 including two small cañas too.

We sampled two more contemporary tapas bars, both equally recommended. Infanta (c/Arfe 32) was packed with groups of Spanish out on Monday night at 1030pm – surely a good sign? And the pork loin with rosemary was tender, marinated salt cod with salmorejo (cold soup) packed with flavour, and boneless bull’s tail with potato purée a deeply meaty main.

Best of all? Eslava (Plaza de San Lorenzo) – our finest eating experience. Solomillo with salsa cabrales (a cheese sauce), a tender spinach pastry, scallops with seaweed purée noodles, a green pepper stuffed with hake – and, best of all (pictured) a slow cooked egg on boletus cake with caramelised wine sauce reduction (just €2.50). Next time we promised we would try the cigar shaped pastry stuffed with cuttlefish. We spent £21 for six tapas and two glasses of wine. It’s rammed like Soho’s Barrafina so get there off peak or just hang out and wait with a drink.

Besides Eslava, La Trastienda was our clear winner, a basic unadorned and quite unflashy bar on Alfalfa, very near the hotel, on our visit it was populated by mostly solo middle-aged men. There are louder, more colourful places along the stretch and compared to them it could seem intimidatingly local, but our advice is to go in anyway. Swinging by after enjoying tapas at a couple of nearby joints, we ordered a plate of manchego cheese, and ended up staying for the most beautiful fleshy gambas, perfectly seasoned.. “Suck the head – it has the best flavour”, advised the barman. Equally finger-lickin was a creamy, salty, oily anchovy on toast (€3).

Accommodation was provided by Casa Numero 7, a nineteenth century merchant’s house tucked away at the northern tip of Barrio Santa Cruz, the ancient heart of Seville – all winding narrow streets and pastel villas.

An elegant house with central courtyard, it has a colonial feel, with its pale walls and patterned drapes, white marble floors, red runners, impressionist art, framed etchings and architectural drawings.

Breakfast is beautifully cooked scrambled eggs served on Churchill crockery in a series of small, Regency-style dining rooms. A two-floored roof terrace is scorching suntrap and offers an urban outlook over the satellite dishes and rooftops. A double room is £168 a night. For more info on the hotel please head here.

We took the train from Malaga to Seville, a two hour journey which costs around £18 each way. British Airways (0844 493 0787) flies four times a week from London City and daily from London Gatwick to Malaga. Return fares start from £149.41 including taxes. Return flights on Easyjet cost upwards of £130+ return.