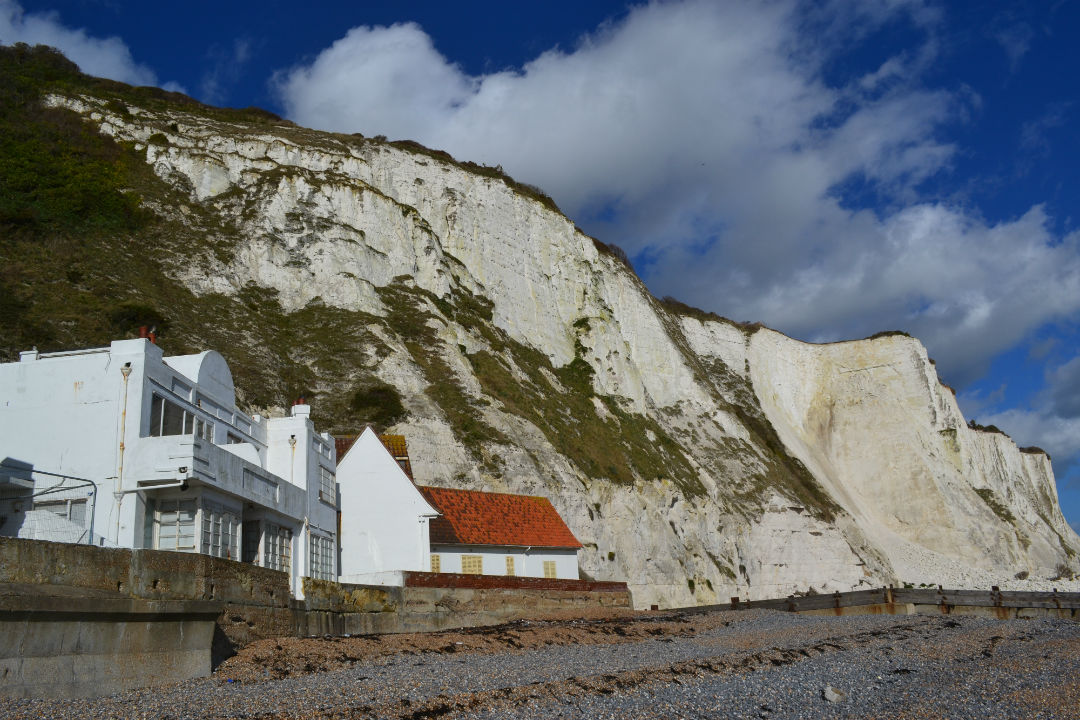 At the bottom of the cliffs, beneath imposing villas gazing out to sea – and a wall dating back to the threat of Napoleonic invasion – is a sign.  The Coastguard is, we’re told, the closest watering hole to France. But can we really be just a few miles from the port of Dover?

Climbing out of the car, we race onto the pebbly beach and stand, watching cross-channel ferries move slowly across the horizon. The UK’s most south-easterly point – just 18 miles from Calais, meaning mobile phones even bleep with a French signal – this is also where channel swimmers begin their heroic attempts.

If the name St Margaret’s is unfamiliar, you may be surprised at its history. From late Victorian times, this ancient inland village-plus-bay, a few miles from Deal, developed into a holiday resort for the well-heeled. Its vulnerable location meant that the Second World War saw mass evacuation, heavy bombardment from above, and the area occupied by troops.

We stroll in bright sun along the promenade to the far eastern end of the bay, where four houses perch over the shingle. In 1945 playwright Noel Coward bought the furthest, and set about repairing and modernising it. Seagulls would climb through the windows, and “the waves either lapped against, or lashed the end wall of his bedroom” (Cole Lesley, Life of Noel Coward).

Coward lived there for seven years, buying up the other three houses for his “privacy”; this was, in fact, strictly against the law due to the post-war housing shortage, so he registered them in other family members’ names. And it became a haven for famous guests like Daphne du Maurier, Spencer Tracy and Katharine Hepburn, who would swim daily in the freezing sea.

Another famous guest was James Bond creator Ian Fleming, who Coward would race from London to meet at the Swingate Arms (still there on the Deal Road). But by 1951 Coward had tired of the gawping day-trippers (claiming the beach “crowded with noisy hoi polloi”) and sold the house to Fleming and his wife, who remained until 1957.

And, if you’re a Bond fan, this really is 007 country: it was between the cliffs of St Margaret’s and Kingsdown, for example, that Fleming sited the missile in Moonraker, while the Royal St George’s course in nearby Sandwich is the setting for the golf scene in Goldfinger.

Back up in St Margaret’s-at-Cliffe, a mile or so from the bay, head to the Red Lion for some Bond memorabilia. After playing that infamous round of golf, OO7 stopped there on his way to Lydd airfield, where he flew to Switzerland in search of Auric Goldfinger. Well, that’s what the pub reckons anyway, so why not? And it’s commemorated by a witty plaque, above.

We’ve visited the bay many times over the years, and often eat lunch at the Coastguard, a flintstone pub garlanded with awards whose perfect selling point is that it’s the “nearest pub to France”. Yet, dramatic location aside, it’s always felt slightly underwhelming foodwise. Recently, however, it was taken over by the team behind the successful Zetland Arms in Kingsdown, who’ve given it a £200K facelift, so expect a better (though still pub grub) offer now on the menu. On a sunny day, it’s really just all about the view: bask on the huge seafront terrace, shades on, with a local beer.
This is box title

The Pines
After lunch explore this garden, with ponds, Mediterranean plants, and memorable views back over the White Cliffs. A handy museum, Hellfire Corner, relates the village’s importance in the war, and its literary/thespian associations: did you know Peter Ustinov was stationed here, and later bought a house?

A stroll around St Margaret’s-at-Cliffe
A village pond, a jumble of houses built across the centuries, ancient boozers, a church dating back to the 12th Century with tower used to store contraband… Try a pint at the Smugglers, a former centre of the import “business”, its low beamed now ceiling adorned with banknotes from around the world. On our visit the jolly landlady was doing a fantastic Sybil Fawlty impression over a customer who had ordered gammon.

Kingsdown
Hike over the White Cliffs – true Moonraker country – past a war memorial and tea room with panoramic views. Kingsdown is a picture-postcard village with several pubs, including the refurbished Zetland Arms, right on the beach. The hearty can continue along the flat promenade to Walmer and Deal, featured in our guide here.

At the White Cliffs Hotel, the vibe is most definitely New England, its exterior stylishly weather-boarded (Farrow & Ball sage, anyone?). Inside think flagstone floors, wicker chairs, cosy wood burner, exposed brick walls, and quirky touches like model lighthouses and storks (not to mention wellies and skates hanging up over the bar, and bunting strewn gaily in the restaurant). Bedrooms are more straightforward, with dark mahogany panelling and spacious bathrooms. A real sense of history pervades, the building dating back to the 16th century.

On the menu, a big play is naturally made on sourcing and seasonal produce: fish and seafood is from the day boats at Deal or St. Margaret’s Bay (apparently the lobster in summer is to die for); Kentish meat is from the Black Pig butcher; and craft beers and wines come from the nearby Time & Tide brewery in Walmer, as well as Chapel Down near Tenterden.

Highlights? A game terrine with zesty burnt orange and sloes in port jelly, and salmon pate with pickled lemons. A medium-rare chargrilled local fillet was big on flavour, but best was a whole-baked plaice with capers and lemon butter. And breakfast impressed, our eggs hollandaise exploding with yolk and richly smoked salmon.

This article was updated in May 2016