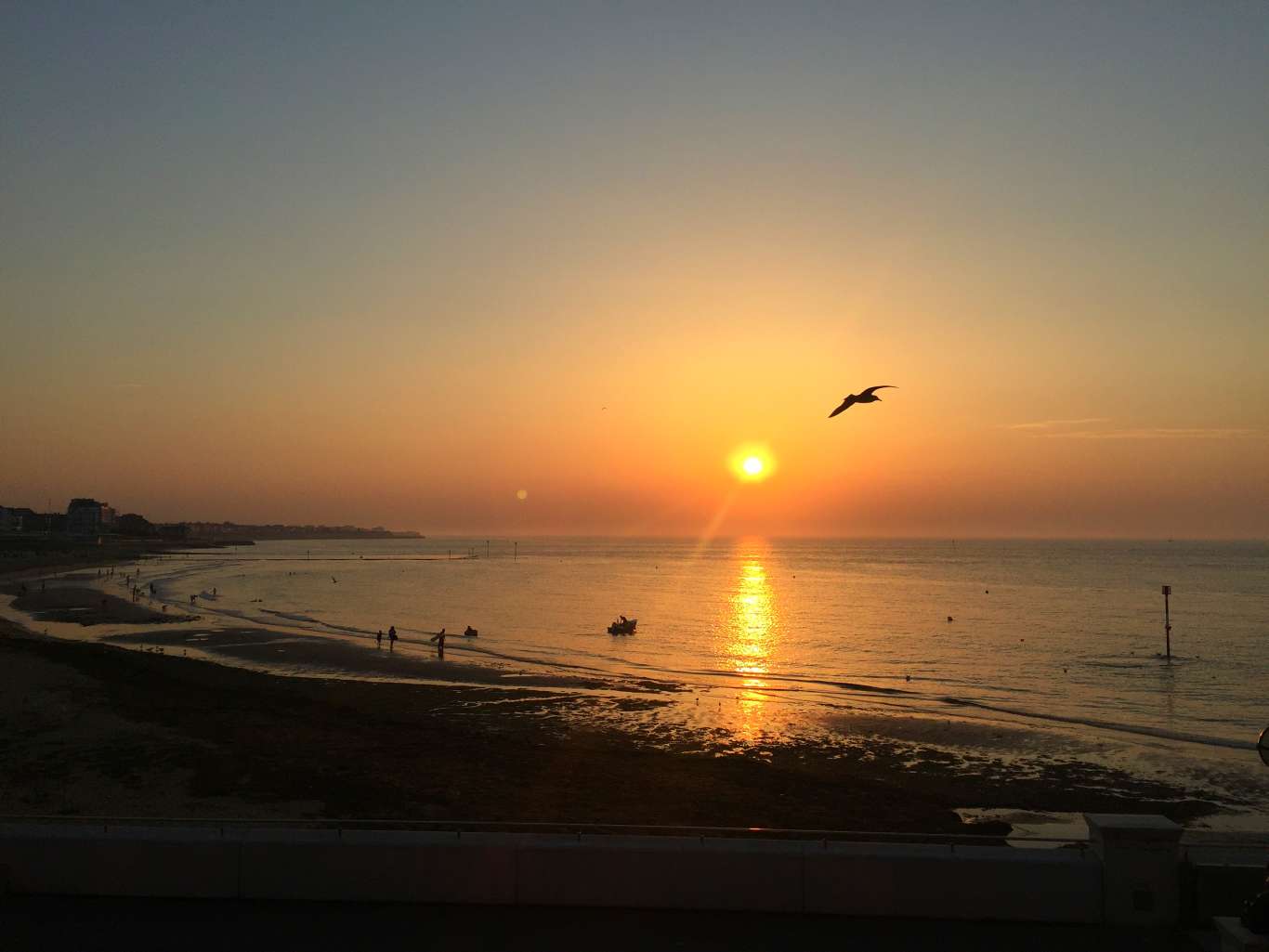 Thanet boy Stephen Emms on the huge changes in his hometown. And a rundown of where to visit this autumn

As a Margate-born travel journalist who has written about the town fairly regularly over the years, it’s surreal to witness the sheer volume of articles that have appeared this year. In fact, my mum and dad, who lived in Thanet for twenty years, but have long moved away, simply wouldn’t believe it.

It was very different back in the eighties, of course. My earliest memories of the now fast-changing Northdown Road – after a premature birth in QEQM hospital – were of temper tantrums outside Lipton’s on the pavement. Or so I’ve been reminded by my mother over the years.

Growing up in Thanet, I loved Bembom Brothers, as Dreamland was renamed back then, and hated glorious Botany Bay – too sandy – where I was taught the alphabet by my mum on the beach.

When we left to live in south London, we still visited Thanet at least yearly for our summer holidays. And so the area has never left me.

As an adult I’ve been a frequent visitor with my partner. Most memorable event? Why, witnessing the burning of Antony Gormley’s Waste Man back in 2006, a surreal spectacle by the artist and director Penny Woolcook for her cult film Margate Exodus.

That weekend was also the first time that it seemed to feel like ‘change’ was afoot, with cafes and pubs rammed, a palpable sense of something new emanating.

At the time the longstanding Harbour Café was one of the few places of its kind, and that warm autumn night it was so busy that the staff simply couldn’t keep up. Everyone ended up – as we have many times before and after – in the (thankfully still operating) LGBT seafront bar Sundowners.

By this time – 2007/8 – I was scribbling about Margate’s charms for papers like The Observer and The Sunday Times, and suddenly changes really were happening apace. The cafes on the revamped Harbour Arm opened: many would agree Bebeached was a turning point and, in the old town, the Lifeboat real ale pub another.

When the once-controversial (and over-budget) Turner Contemporary launched in April 2011 there was one helluva party: I remember looking out of its first floor windows to the sea in awe.

Fast forward to the present day and now the old town is saturated with lifestyle shops and cafes (see below guide), it’s interesting to observe what’s happening to Cliftonville, the old haunt where I grew up all those years ago. Central to its renaissance was early arrival Fort’s Cafe; and later, Resort Studios, a contemporary arts collective which in autumn 2013 took over the towering Pettman Building.

It was only a matter of time before a slew of new businesses, many owned by young London emigrées, took over some of the more derelict spaces on Northdown Road, the street that, since my childhood, had fallen somewhat on hard times. Will a demographic balance be maintained? Only time will tell.

So Margz – as we don’t call it, ever – has probably hit the big time, at least in the eyes of certain parts of the London media. (No, we really don’t need another feature quoting Turner’s ‘loveliest skies in Europe’. Oops, there we go again.)

Anyway, here are some things you can do if you visit one of Kent’s most fascinating towns this season.

If it’s your first visit, you must, of course, do a) Dreamland amusement park (free to enter), b) the Turner Contemporary, the magnificent waterside gallery showing a retrospective of Turner himself until Jan 2017 and c) the Shell Grotto, the mysterious underground passageway studded with four million shells on an unlikely backstreet.

Then potter round the old town’s cafes and vintage shops: especially recommended are Breuer and Dawson for vintage menswear, the Light Keeper (yup, on-trend bulbs), Fox & Spindle for cute gifts and Margate Retro for furniture (bring the car). Don’t miss Fort Road Yard, an outdoor market, for everything from (more) interiors to streetfood. And an essential stroll is R.G. Scott’s, a vast multi-floored secondhand, antique and vintage showroom towards Cliftonville.

Options abound these days. After coffee at the Greedy Cow (pictured) on the cobbled square, go old school at original seafront hangout the Harbour Café, or plump for pizza at new old town addition L’Olivo, or bay-facing classic GB pizza Co (dog-friendly with cheap wine and craft beer, but it gets hot when the sun blasts the windows though, mind).

Book ahead for Michelin-starred Ambrette, an innovative Indian-British fusion restaurant with set lunch menus (currently £20 for two courses); or Hantverk & Found, a tiny dining room with downstairs gallery for superior seafood sharing plates (think crab noodle salad, or scallops in miso and wasabi panko crumb). To drink? Try the Lifeboat, Fez bar on the High Street, or Buoy & Oyster next to the Sands Hotel.

Follow the shoreline and pass the brand new Old Kent Market, a mix of streetfood and produce stalls, on your way to the Harbour Arm. If it’s a warm day, and the tide is out, hold your nose, as the seaweed can be a bit pongy, and make for Scandi-style Mala Kaffee for an espresso with epic views. Next door Cheesy Tiger serves up well-sourced wine and sharing plates cooked by ex-Babyshambles musician-cum-chef Tom: the onglet with endive and ricotta was a particular hit on our table. Adjoining it is the Harbour Arms, a cute micro real ale pub, and the Lighthouse bar at the harbour tip, which has lively regular spoken word and live music soirees. We had a riotous time at a poetry night on our last visit.

The Theatre Royal, which dates from 1786, in the Hawley Square conservation area, is a pitch perfect repro of a London venue; we watched a memorable gig by John Cooper Clarke a few years back. Up in Cliftonville, past the Winter Gardens (which hosts regular bands and singers) the Tom Thumb Theatre is one of the world’s smallest theatres; as is the nearby Margate Arts Club on Northdown Road, open sporadically when events are on, so check social media for details. And Sundowners: it’s an institution on the seafront, whatever your sexuality. A new arrival this autumn is The Talking Drum, from the guys behind renowned Deal fave Smugglers Records.

You may struggle to cram its outer reaches into a single day as there’s so much to see in central Margate, but if you’re here for a weekend then make the pilgrimage up to Northdown Road and the Tap Room, on Northdown Parade. A tiny micropub, its walls lined with timber and taps, it’ll be filled with locals all debating the usual Margate topics – gentrification and pubs, basically.

On your way there don’t miss a look at Resort Studios (the downstairs gallery space is currently occupied by a pop-up shop from Urchin Wines), bakery and grocer’s the Grain Grocer, record shop Transmission, old-school patisserie Batchelors – and, our favourite new arrival, Cliff’s.

This two-floor coffee shop, yoga studio and hair salon, with eye-catching black and white staircase, is lined with records (all for sale) and boxes upstairs to browse. On our visit the 1989 Pet Shop Boys album Introspective gently throbbed in the vast spaces as we placed our order. Walk back along Cliff Terrace past the Plinth art store and gallery, Haekel’s skincare shop and Roost, a kind of posh chicken shop. Before you reach the old town is Fort’s Café, arguably the first opening of its kind on that stretch.

There are lots more options now than a decade ago: from the small and perfect Reading Rooms, tucked away on Hawley Square, to the memorable museum-like Walpole Bay Hotel in Cliftonville, not to mention all sorts of air b’n’b options.

But The Sands, which opened three years ago and provided our accommodation last time, boasts the best sea and sunset views. Not all rooms are beach-facing, but at least the website is very clear on what is and isn’t. It was formerly a Victorian hotel which fell on hard times – and in 2011 was bought in auction by Nick Conington, whose original plan to turn the building into luxury apartments was shelved when he decided to restore it as a hotel. Fair enough.

Our attic perch was on the small side, but tastefully furnished in, you guessed it, sandy and grey hues, with a lovely luxury bathroom and shower. Best of all were the small French doors onto a private terrace with far-reaching bay views, and just acres of sky. And there’s an Ibizan style roof terrace open to all residents which, on a blue-sky day, is blissful.

It was a heatwave, and in the evening we dined on the sunset terrace, as the yolk dipped into a deep orange hue. Service in the restaurant is slow, and at times amateur, for such an established destination, but the food was simply executed and pleasant to look at.

Gin-cured salmon with caviar crème fraiche and a beetroot tian with caramelised cauliflower made for decent starters. Our sliced duck breast was suitably pink, layered with watercress and cherries, while local lamb came two ways, a rack (very blood-rare) and belly, with tenderstem broccoli and potato foam. There are also the usual range of cocktails, plus Kentish wines and craft beers. But really: it’s all about drinking in that view.