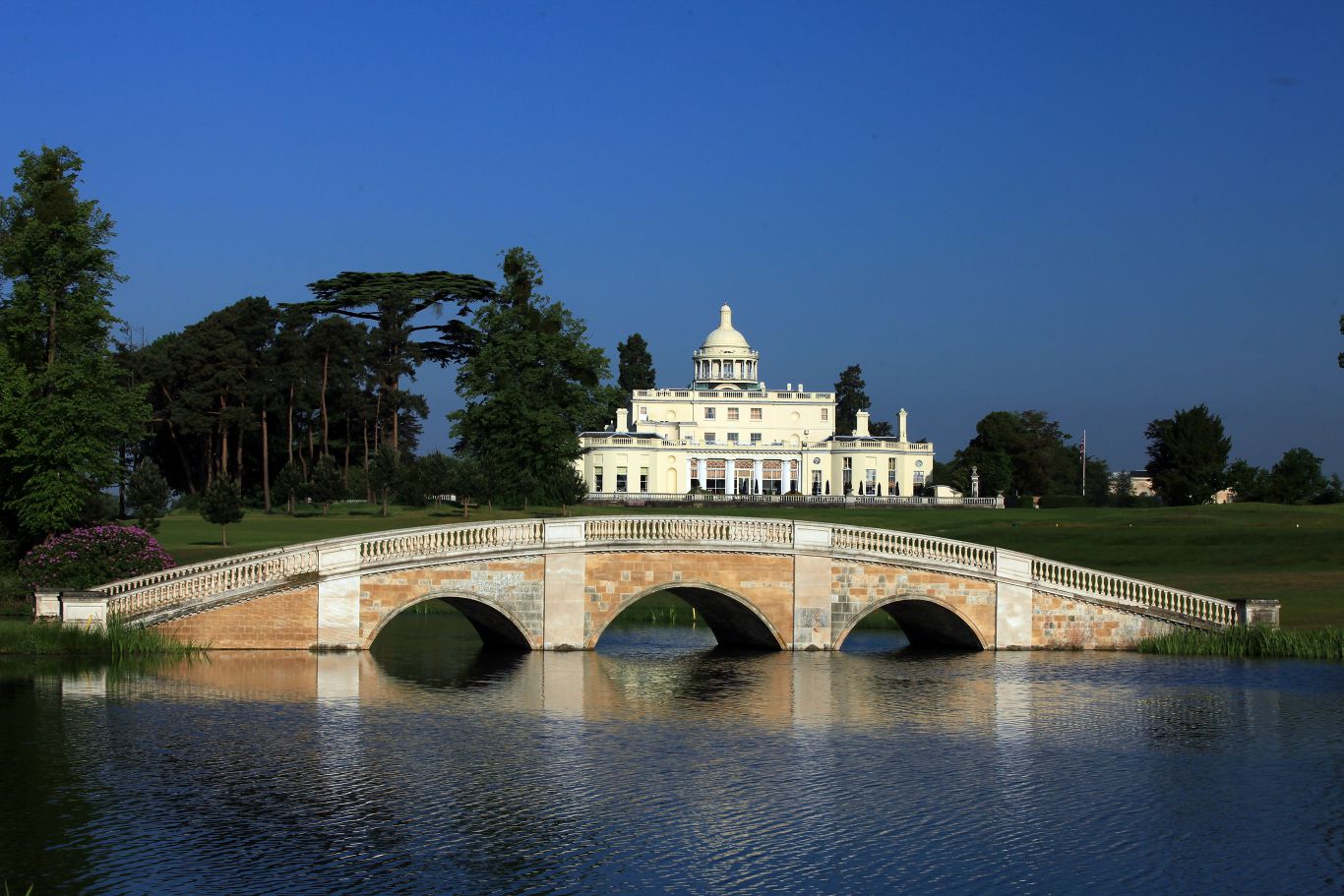 It’s satisfying staying somewhere ‘exotic’ that’s also nearby – at least we reckon – as it removes the part of the weekend that is often thankless: grindingly slow travel on a packed train or bumper-to-bumper stretch of motorway.

It’s even more surreal when the nearest station is Slough, just 15 mins on the train from Paddington. And yet majestic Stoke Park is just a short cab ride from the Buckinghamshire town made infamous by Betjeman’s rather damning poem.

Stoke Park is the real deal: an 18th century Palladian mansion, with a whopping thousand years’ backstory (it’s even mentioned in the Domesday Book), surrounded by 300 acres of parkland, some of it impressively tropical. Its golf course has starred in the classic James Bond films Goldfinger and Tomorrow Never Dies, while the lake stole the limelight in the first Bridget Jones movie – and made a nation look with fresh wryness at the phrase “mini break”. You can even book the room where Firth romanced Zellweger.

So, first thoughts are that it’s easy to lose yourself in history here, preferably over an aperitif by the fire: the original Elizabethan manor house, which still faces the icing-cake mansion, once belonged to Queen Elizabeth I and later Sir Edward Coke, the bloke who prosecuted Guy Fawkes – and, aptly enough, coined the phrase “an Englishman’s home is his castle”.

And then we have the Penn family (founding fathers of, um, Pennsylvania in the US) to thank for the grandeur of today’s pile. Thomas Penn lived in the Manor House until his death in 1775: his son John then hired James Wyatt, a well-known Georgian architect, to design the Mansion, completed in 1813, while it was Humphry Repton who constructed the beautiful bridge over the lakes.

After a reviving espresso on the manicured lawn outside the Orangery, we embark on a pre-lunch hike to take some pictures from the famous bridge. From here you can admire the world-famous 27-hole golf course (and if that sounds like overstatement, it really isn’t) designed in 1908 by Harry Colt. The nearby Memorial Gardens, and their classical colonnade, with aged vines and sunken squares, are a must: particularly atmospheric is the adjoining churchyard, the inspiration for 18th century poet Thomas Gray’s Elegy Written in A Country Churchyard: he’s commemorated with a five-metre high monument.

Behind the house are acres of sunken tropical gardens that we delight in, especially as no other visitor has found them. All manner of palms, of all shapes and sizes, and every age of antiquity, rub shoulders with yuccas and pines, secret bridges connecting underused pathways lined with rambling bushes.

The modern spa building and hotel was built in 2002. Its indoor pool is high-ceilinged and glamorous, with steam rooms to hit afterwards – but it’s the outdoor areas that win us over. The spa gardens, opened only last year, are Mediterranean on a sunny day: the secluded outdoor hot tub is hidden by tropical trees, while a few steps away is the Scandi-style sauna. Loungers and swinging wicker chairs are lined up, with towering and aged palms dotted about making us feel like we’re in Marbella or Marrakesh.

It’s such a sun trap that even in April scantily-clad bathers lay, books open on tummies, as they doze. More active guests (we imagine) must be hitting the state-of-the-art gym, hot yoga studios, or one of 13 – 13! – tennis courts. It’s enough to make us – yawn! – feel hungry already.

Speaking of which, several options exist. There’s the Orangery, with its all-day dining menu, and San Marco for salads, pastas and mains, with a contemporary interior and terrace overlooking the spa gardens.

But you can’t stay at Stoke Park without dining at Humphry’s. With celebrity chef Chris Wheeler at the helm (of Great British Menu 2016 fame) the menu is as on-trend as anywhere in central London.

The three-course dinner comes with all manner of extras and amuse bouches, from spoons of beef tartare to a frothy celeriac foam with toasted almonds. Over a couple of hours, the delights unfold: tender lamb rack, as red as the flaming sunset, is all contrasts of texture and flavour, down to the sticky belly, the rosemary-infused pearl barley, wild garlic and very meaty sauce. Fleshy halibut with clams, soft bullets of seaweed gnocchi and compressed cucumber with lime, is only a tad too light on the briny oyster emulsion to make it sing quite as loudly.

We especially love the starters: sweet queenie scallops come with pickled fennel, crispy seaweed, and the anchovy and citrus notes of a ponzu and dashi dressing. Beetroot with spicy cured mackerel and celeriac remoulade is powered up by the roar of horseradish.

In all honesty, dinner is a hard act to follow; the only note of could-do-better in our stay is that, after such feasting, the cooked breakfast feels more pedestrian. But that really is being picky. (I’m sure there’s an emoji for that.)

The interior of the vast palazzo is centred around the grand curving staircase leading up past hanging tapestries and dangling chandelier to the bedrooms. Ours has elegant mantelpiece, gilt plush velvet sofa, four-poster, marble bathroom and huge floor-to-ceiling sash windows. A spacious terrace with simple Ibizan rattan furniture has a panoramic view over the golf course and its 18-metre high Sir Edward Coke monument.

Glass of fizz in hand, as the sun sets, it’s fun to watch the comings and goings on the busy drive below, as limos pull up, and well-heeled punters, golfers and what look like members of foreign royal families, all spill out.

Or maybe, of course, it’s yet another Hollywood movie in action.


This is box title
Rooms from £190 for a Sunday night stay w/ breakfast + use of the spa facilities. Over the summer, book a two night stay for the price of one (offer available 2nd July until 10th Sept): stokepark.com