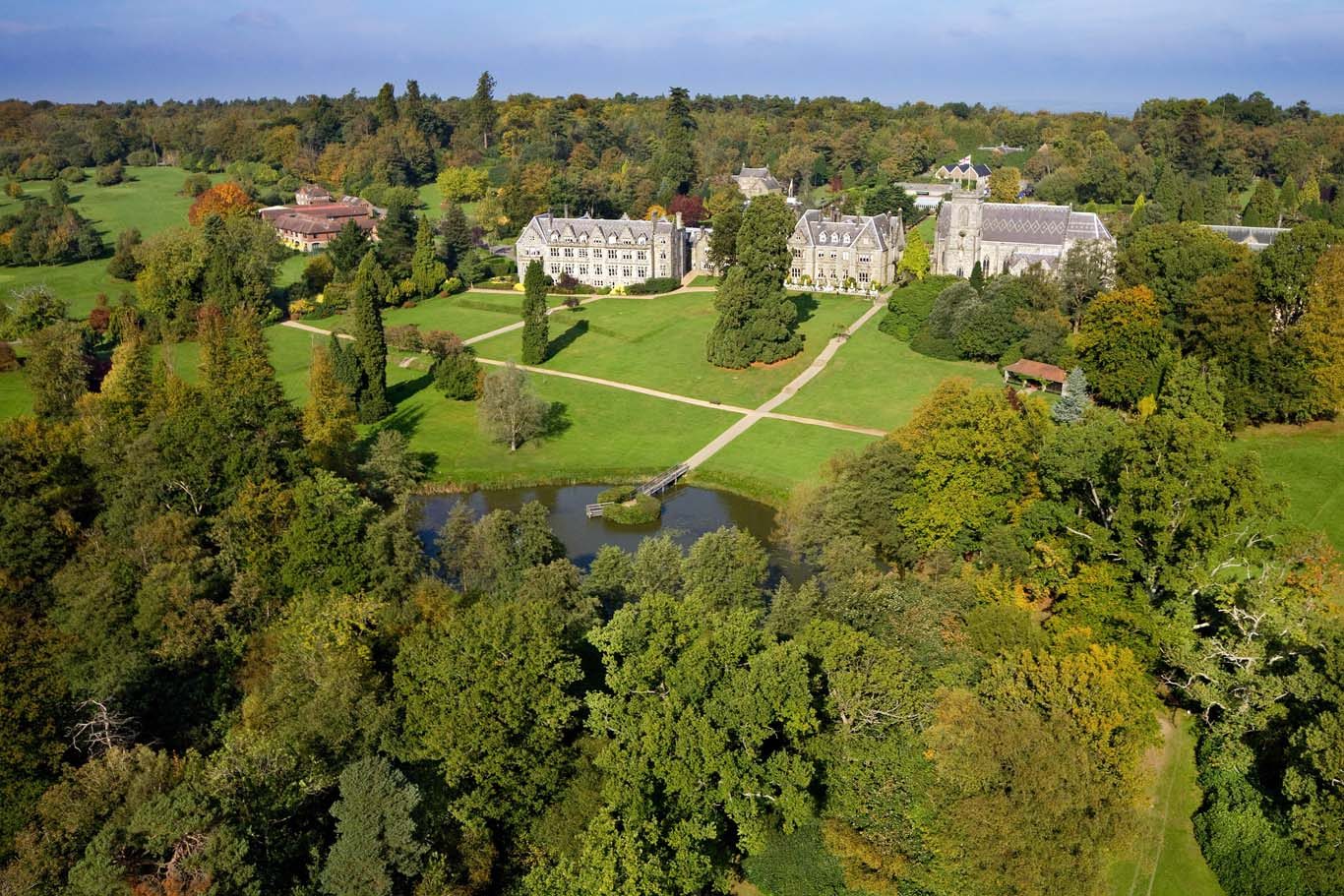 We’re crunching through bracken in the steamy heart of Ashdown Forest, with our llama walking by our side, as you do. The wide-eyed look on my daughter’s face reveals that she’s preparing to ask if we can take him home as our new pet.

Marco – as the goofy Andean camelid she holds gingerly at the end of a lead is known – certainly is quite cute. But he can also spit with proficiency and reach 0-30mph in an instant, which would leave even Usain Bolt in his dust, so I think there may about to be tears.

The Llama Park is just one of the quirky diversions on offer in the sprawling acres around Ashdown Park Hotel in East Sussex. It’s not owned by the hotel, but is a short walk (or excitable golf buggy ride) towards one end of its sizable grounds, and entry is free for hotel guests. Walking assorted llamas and alpacas is one of the highlights of a visit (booked separately), and the venue revels in its own vague ridiculousness, even offering weddings complete with llamas in bow ties for the photos, if that’s your thing.

By the time we’ve fed the animals and returned to rambling grandeur of the hotel buildings, which have variously seen use as a family manor, school, hospital, convalescence home, nunnery and, er, Barclays Bank training centre in previous eras, our room is ready.

We’re swept upstairs to the Park Suite, which, as daughter number two points out with her own saucer-eyed glaze, is by far the largest room any of us will have ever slept in. With this cue, the kids dash about, delighting in the oversize dimensions. The view from these windows across the gardens, to a lake complete with fountain framed by sky-scraping mature trees, is English country tranquility itself.

We opt for a pre-dinner swim at the well-kept spa, passing tennis courts, a croquet lawn and glimpses of golf course peeking from behind almost tropically lush bushes. There’s simply too much to do, sending the kids brains whizzing once more at the possibilities.

There’s also a precious sense of isolation here with the forest all around, hence the degree of self-sufficiency. It would be easy to stay put for many happy days and not repeat the same activity twice. However you’re actually only a few minutes’ drive from a whole host of other attractions, such as Sheffield Park Gardens or the hallowed woodlands which inspired A.A. Milne to write about Pooh, Eeyore and co.

At sundown, we enter unknown territory, introducing the kids to their first dining room in which gentlemen are required to wear a collared shirt and jacket. The high-ceilinged formality has a magical effect, and reduces their usual cacophony to whispers, while some decent items on the children’s menu prove a hit (posh meatball pasta, rather than just chicken and chips), being wolfed down. It’s of huge pleasure to discuss the meal with attentive youngsters doing their very best job of acting all refined.

The Anderida Restaurant boasts two AA rosettes, but still obviously caters to a fairly undemanding clientele with its steady menu of favourites, with the occasional flourish. We are a little disappointed our waiter doesn’t wish to steer us through any local wines (the acclaimed Bluebell Vineyard being only up the road) so, unassisted, we pick a couple of highly serviceable French and German options available by the glass, instead.

My poached lamb is a little toothy to be honest, but tasty nevertheless, while the missus’ summer veg risotto is overly liberal on the goat’s cheese cream. The kids love the regular performance spectacle of synchronised whisking away of silver cloches, and are disappointed the same pomp isn’t applied at breakfast, which treads a similarly safe path through the classics the following morning.

What then follows is dreamy day of adventures, discovering the hotel’s beautifully-kept secret garden, and a sizable walled one too, where the nuns used to grow their veg. Both are idyllic, secluded spots.

We play hide and seek deep inside the twisted shadows of a giant rhododendron bush, finding plentiful evidence under foot that the forest’s wild deer passed through the grounds earlier this morning. When a summer deluge strikes and even the rhododendron canopy can’t shelter us any more, we attempt (badly) a game of snooker on the full-sized tables found beneath the dining room.

Later, we hop in a cab to Sheffield Park station on the impressive Bluebell Railway, an 11-mile heritage line staffed by over 400 volunteers. You’ll have seen it make cameo appearances in many a Sunday-night TV period drama. Chuffing through the forest and vineyards in our own Victorian carriage, there’s suddenly a cry as we finally spot some deer, three white tails bobbing away at pace into the safety of the trees.

At East Grinstead, our steam locomotive sighs heavily and deposits us right beside the main line back to London Victoria. The clan need feeding first though, so we venture into the pretty 14th century high street, a wonky strip of timber-framed buildings hosting assorted mediocre food options. We settle for the well-appointed roof terrace at CJ’s Café Bar (55-57 High St), with views of St Swithun’s church and locate highlights from a long, crowd-pleasing menu ranging from tartines to fish ‘n’ chips.

Without the youngsters in tow, micropub The Open Arms looks a great pit-stop too, with local breweries Pig and Porter and Ashdown Ales among the range of kegs. It’s then only 56 mins back to the Smoke.

We’ve had a dazzling array of family escapades – steam trains, fine dining, South American herd animals and sports pursuits – all within an ancient English forest setting. I just hope the kids don’t expect every weekend now is going to be quite so fully engrossing.

This is box title
Ashdown Park Hotel, Wych Cross, East Grinstead, RH18. Family breaks from £332 a night all year round, including breakfast and dinner, plus the spa, llama farm and discounts to other local attractions. Info and bookings here.