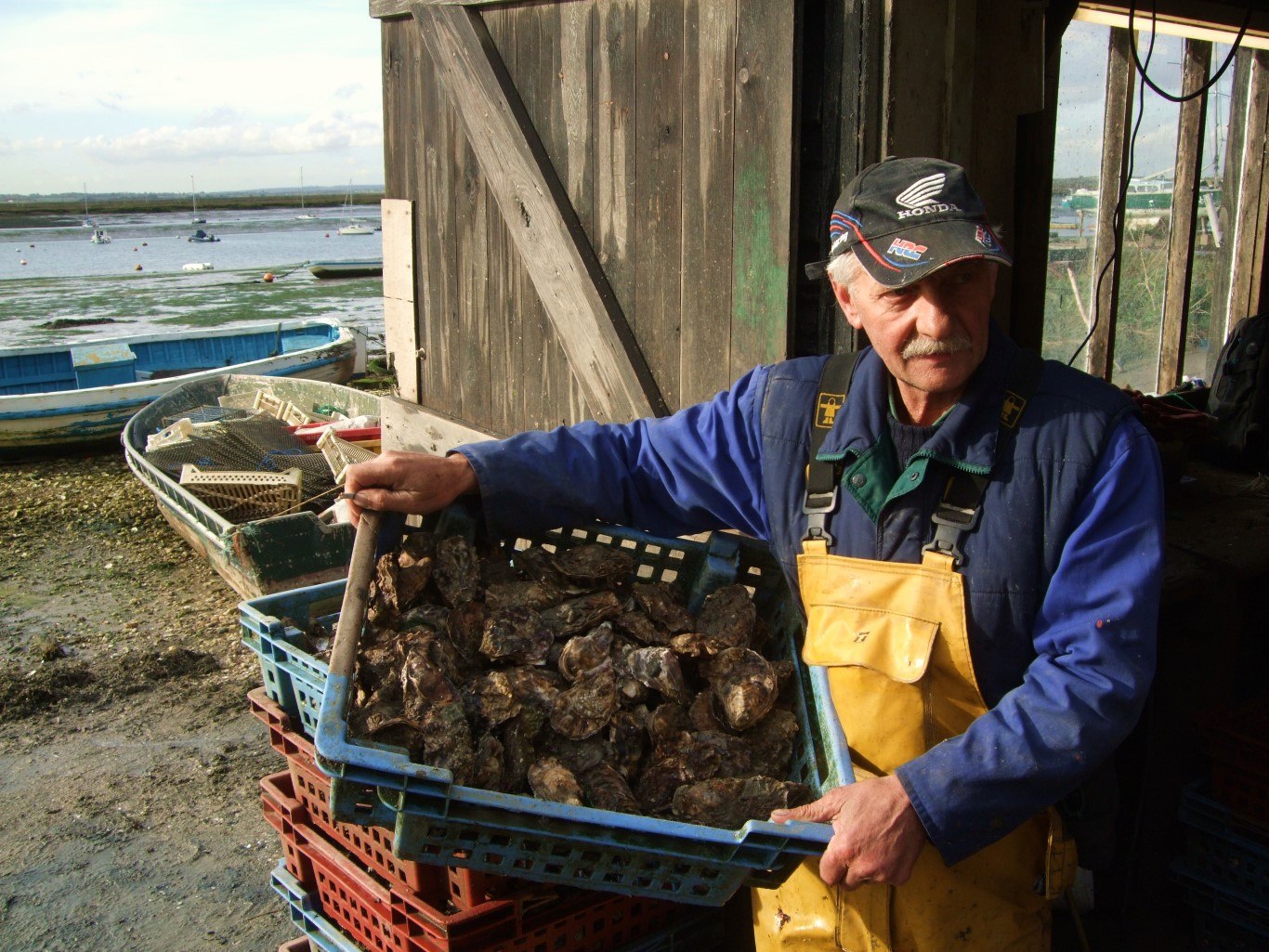 Of course it's all about oysters. But there's more to the other-worldly island than that

‘It’s like an invisible curtain you pass through,’ enthuses artist James Weaver. He’s talking about The Strood, the only Anglo-Saxon causeway in England, which connects tiny Mersea Island to the Essex mainland. ‘More psychological,’ he adds, ‘than physical.’

Several times a month high tides cut Mersea Island off completely – and the locals like it that way. But today, it’s an undistinguished low water as I cross from Colchester – a far cry from the stormy night a Roman legion reputedly drowned (their howls, according to local myth, still resound in bad weather).

Once over the boundary, however, those psychological benefits become clear: the sky has a bright, broad quality and the salty air does feel inexplicably different from the mainland.

This other-worldly feeling pervades Mersea, the most easterly inhabited island in Britain. I meet my guide, Alan Mogridge, at the oyster beds, cutely dotted with dilapidated houseboats, and admire the marshes (more bio-diverse than the rainforest) and distant creeks, the scent of salt winds blowing off the sea.

As we stroll, Alan maps out a potted history of the island: elephant and rhino bones were unearthed upshore a century ago; Roman pavements lurk under the St Peter and Paul church (itself built 1046); Mersea is mentioned in the Domesday Book (as the home of a hundred ‘souls’); there was an earthquake in 1884, and in the First World War a zeppelin was shot down here.

He draws breath. The main reason for the island’s current fashionable status is, however, oysters. Without further do, we arrive at the Company Shed, a black wooden-slatted shack on the beach, where you bring your own bread and wine (very on-trend, although it’s been this way for 20 years).

Owned by the Haward family, who have worked in the oyster industry for two centuries, the Shed is by no means a secret – in fact it’s one of Rick Stein’s favourite restaurants – and its wrigglingly fresh shellfish means that at midday the place is heaving. There are no reservations taken, so we add our name to the list but are, fortunately, rewarded with a table within a few minutes. Half an hour later, queues snake outside the door: Italians wielding phrasebooks, Japanese clutching bottles of local wine.

Yes, local wine. In Essex. Alan cracks open a chilled Mehalah, bottled from the picturesque vineyard in East Mersea. It’s a real surprise, with the zestiness of a New Zealand Sauvignon, and perfect to wash down Native oysters, mussels, lobster and a huge platter of seafood.

‘Nowadays,’ he says, as we slurp down the taste of the briny sea, ‘oysters have to be subjected to UV light for 42 hours before they reach EU standards.’

As we leave the shed, dozens of hopeful diners still jostling by the wetfish stall, Alan points out that the fishing fleet here is the biggest between Lowestoft and Brixham. Ululating gulls hang in the air as we wander down to the idyllic 17th century ‘Old City’ quarter, with its white clapperboard houses, and tiny streets with big names like ‘City Road’, but I’m keen to find out the story behind the intriguingly-named ‘Mehalah’ wine, so it’s off to the 12th century moated St Edmund church, in more desolate East Mersea, to meet Tony Clifton, the churchwarden.

‘The word Mehalah comes from the title of a bestselling romantic novel by Sabine Baring Gould, the rector here in the 1870s,’ Tony says. ‘He also wrote ‘Onward Christian Soldiers’ – and even managed to father 14 children!’ He points out the nearby vineyard, which, with the sun shining, could be an understudy for Tuscany (or at least Sussex). It’s owned by the Barber family, who, with no previous experience, bought the place in 1988, revived the name ‘Mehalah’ (one of several wines they produce), and now offer basic bed and breakfast, a café, wine shop and onsite brewery (including a not-exactly enticing oyster-flavour ale).

But it’s time for tea. I head to the Art Café, opposite the church, opened by James Weaver and his wife ten years ago. It’s the epicentre of all things latte, as well as a gallery for local artists like Audrey Davy and Elizabeth Morris – and of course James himself, who, like the Hawards, can trace back 200 years of ancestors. I ask what it’s like living in such a small community (population: 7000). ‘It’s very trusting,’ he says, ‘because everyone knows each other.’ (Or, as Brigitte, the waitress at the Coast Inn, a favourite haunt of Winston Churchill’s, says later: ‘You sneeze in the evening, and everybody knows about it in the morning.’)

Dawn. I stand on the verandah of the Victory, a pub-with-rooms on the waterfront. Orange-blue sky smiles over the mudflats, with their lonely fringes of tide, and I listen to the boat masts clinking, like cows’ bells, in the wind.

I was hoping the waters would be high, too high, so I might experience, as James says rather lyrically, ‘being encircled by a giant mirror’ – but, alas, The Strood is as dry as an oyster shell, and the passage back to the mainland all too easy.

Find out more on Mersea Island here. More on room prices at the Victory hotel here.