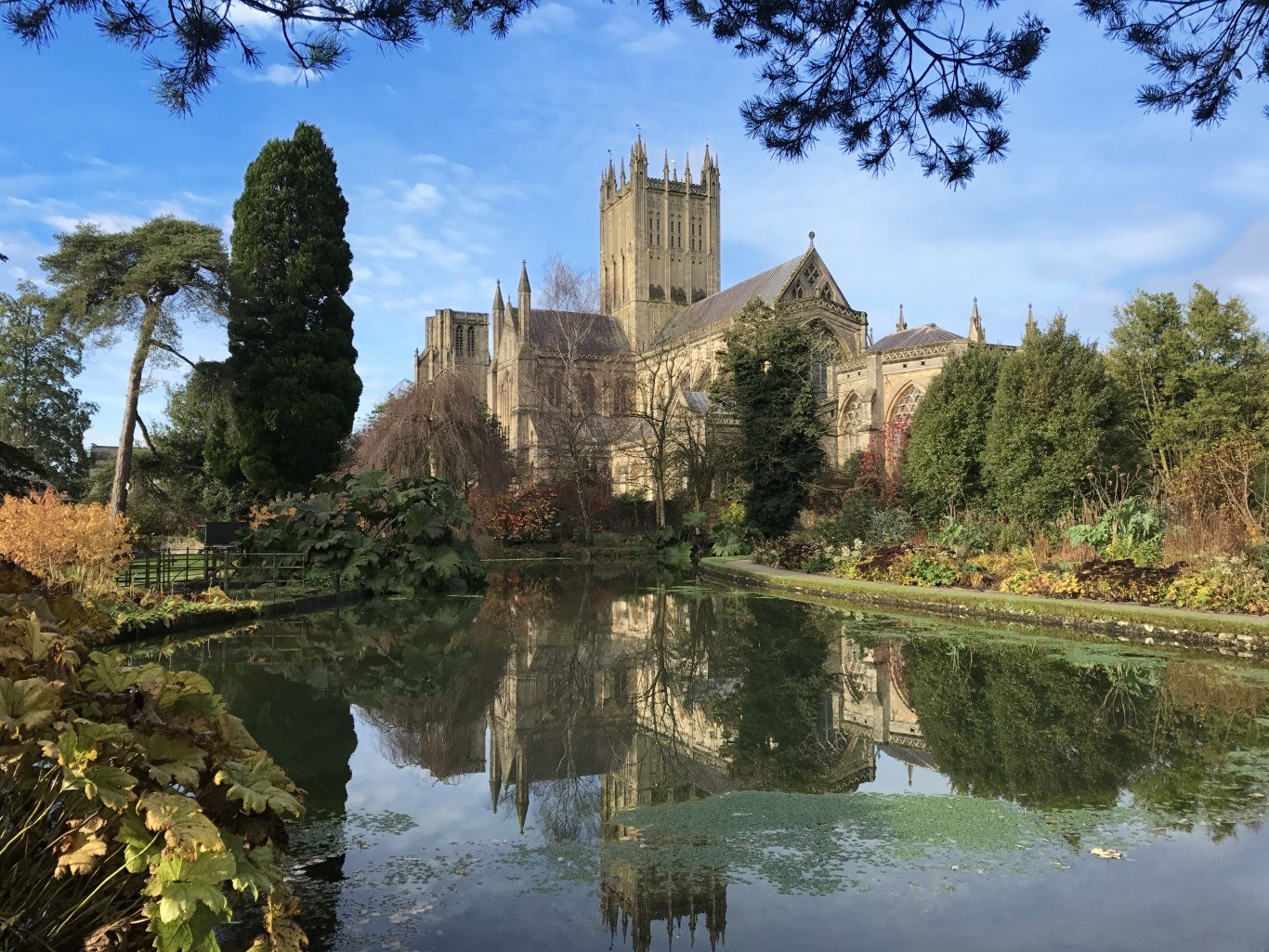 It’s mini. England’s tiniest city, in fact (second only to the City of London in area and population). And one of the oldest too – a detail you can’t miss taking a stroll around Market Place: medieval all the way, with the awe-inspiring cathedral dating back to the 13th century.

There have been markets in the main square for centuries: if you arrive on a Saturday morning, as we did, it makes the perfect intro to the city. Dozens of stalls sell everything from clothes to candles, sourdough bread to locally-produced cheese from Wookey Hole and, of course, nearby Cheddar. (If you miss the market, which winds down about 3pm, a cluster of independent shops, galleries and studios line the area around Queen Street and Market Street).

Whether you’re religious or not, the cathedral is also a must: slip through the Penniless Porch – named after beggars who plied their trade there in the 15th century – to admire the magnificent façade of a religious pile that’s nearly a thousand years old. Although imposing, with its unrivalled west front and central tower, it’s not huge and you can easily whip round before lunch. It’s free – but make a donation, as it costs £4.5k a day to run, apparently. And don’t forget to gawp at one of the oldest residential streets in the UK, the 15th century Vicars’ Close just behind (see pic, below right).

Our preferred pit stop for coffee-with-a-view proved to be the Scandi-styled Twenty One on the main square. When the sun shines, as it did on Sunday morning, there was something of the alpine resort on its al fresco terrace, all bobble hats and puffas, yappy dogs and hot chocolate; a real sun-trap, even in winter.

Also recommended for an espresso is the atmospheric two-roomed Square Edge café, with courtyard behind, its dark panelling and inglenook fireplaces made warmer by regular “how-was-everything-my-darlings” from the affable owner. And a five-minute walk away on Priory Road, in the independent quarter, is veritable institution Good Earth, with its roomy café and adjoining health food shop.

Being a touristy city, it takes a moment to work out the best spots for a meal. Sadler Street, which runs alongside the Cathedral Green, is probably your best bet initially, with a clutch of locally rated eateries like Goodfellows and Rugantino’s. We enjoyed the set lunch at contemporary brasserie Ensemble on this stretch: at £15 for two courses, starters included a tasty duck and pistachio terrine, and mains an unlikely but successful combination of celeriac spelt risotto with sweet, juicy prawns and truffle oil.

Our top evening choice was cosy gastropub The Fountain (1 St Thomas St, Wells BA5), just beyond the city walls: if you’re staying on a Monday there’s a bargainous deal of two rump steaks, pleasingly ruddy when sliced, with chips and two glasses of house red –all for just £25. Be prepared to wait, however: service is leisurely.

Thirsty? Boozers are dotted around everywhere, almost one on each corner, in fact. Particularly recommended is teensy micropub Just Ales, with its dozing, amicable canine, living-room vibes and chalked-up ranging of robust amber ales and local beers; but also worth a pint are curved salmon-painted watering hole the City Arms, a former gaol, busy backstreet pub the Rose & Crown, and The Crown on the main square, made famous by the hit Simon Pegg movie Hot Fuzz. There’s even a plaque on the exterior commemorating its notoriety (and there are Hot Fuzz walks guiding fans through various locations used, too).

As its name suggests, the city is named after three wells, all dedicated to a certain apostle, Saint Andrew: two are within the grounds of the Bishop’s Palace, surely among the country’s most tranquil spots. Wander round the 13th century pile, barely changed from its medieval heyday, before heading to the glorious 14-acre tropical plant-filled garden, home to the likes of black walnuts, cedar and ginkgo trees, with ramparts overlooking the moat and Somerset Levels beyond. The highlight is (naturally) the two wells, with their adjoining lawns, Japanese shrubs and stunning views. It’s all reflections, elegant swans and big, big skies.

Somerset is full of diverse options to consider, but these are all well worth it: Cheddar Gorge’s spectacular walk along its cliff tops, with their commanding views; Glastonbury town and Tor for a sense of the county’s mythical heart; Bruton, for a hit of artiness, with its capacious Hauser & Wirth gallery and high-end boutiques and restaurants like At the Chapel); and the hilly streets of bohemian Frome, in particular Catherine Hill and Cheap Street.

Driving takes about three hours from north London via the M3. By train, Castle Cary railway station is the closest to Wells, approx 15 miles away and 100 mins direct from Paddington. For accommodation, there are several hotels around the Market Square area and along Sadler Street, such as The Crown (crownatwells.co.uk) and White Hart (whitehartwells.com). The side and backstreets are mostly Georgian and Victorian terraces, many of which are on Airbnb or the usual letting sites online; ours was on holidaycottages.co.uk.