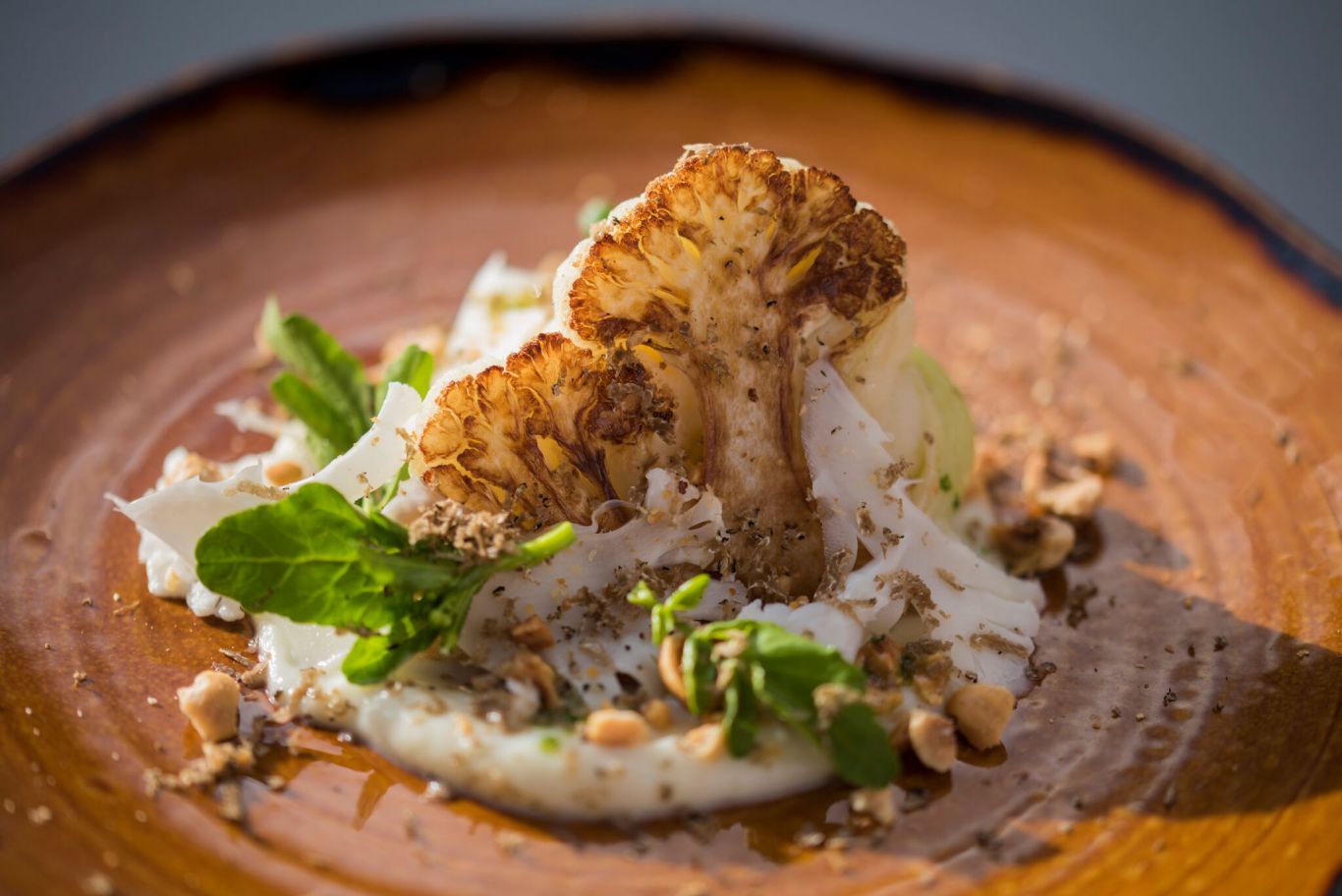 We’re standing opposite the Grade II-listed – and soon to be developed – Carriage Works on Stokes Croft, the street known as Bristol’s creative epicentre. Alongside the coffee bars, hole-in-the-wall restaurants and eclectic galleries and shops, graffiti is everywhere, as you might expect from the original stomping ground of Banksy.

Visitors flock to see his seminal 1990s work Mild Mild West (above) outside the community-minded Hamilton House building, while a huge “Think Local Boycott Tesco” work dominates the corner Cheltenham Road, a comment on the chain opening here in 2011, which ended in rioting.

It’s a fascinating part of the city, underlining its diversity within a relatively small geographical area. Just fifteen minutes’ walk south from Stokes Croft – a sort of jumble of Dalston, Berlin and Camden Town – is the upscale Harbourside area, with its glass bars and mammoth restaurants; while a hike uphill is swanky Clifton, a little like Hampstead if the Heath dropped away down to the river deep below.

The talk in Bristol, as in many British urban centres, is one of regeneration and improvement. Its impressive grandeur dates back to its 18th century role as the second most important port in the UK after London. But in the Second World War the city was badly bombed and had a harder time reinventing itself.

Now, of course, it just can’t stop. And it’s hard to argue with a reborn space as beautiful as, say, Queen’s Square in the Old City district, just near the train station: once traffic-clogged and decaying, it’s now a bucolic Georgian park. Just arrived? Start there and stroll up noted shopping stretch Park Street, with its sweep of sandstone buildings, to Clifton Suspension Bridge, the city’s iconic landmark designed by Isambard Kingdom Brunel.

Wandering through Clifton village – with its secluded squares, and appealing independent shops – it’s easy to forget its grand terraces were built with profits from the tobacco and slave trades.

The bridge, which spans the Avon Gorge, and was completed in 1864 (five years after Brunel’s death), is something else: 245 ft above high tide, 1453 ft wide, it’s awe-inspiring, the Samaritans signs dotted about rather humbling.

Suicides are, apparently, much reduced these days since barriers were erected in the late 1990s, but in 1885, a 22-year-old woman named Sarah Ann Henley survived a fall when her billowing skirts acted as a parachute; she subsequently lived into her eighties. (This was a story my granny, who lived in Clifton, told me many times).

Back down in the narrow streets of Old City, on our most recent visit we stayed at Brooks Guesthouse, a converted 1950s office block with imposing gates and charming Mediterranean-style courtyard. Sadly the sun barely shone (although the rain alternated between mizzle and full-on downpour), but we imagined it must be dreamy on a warm midsummer evening.

The hotel is pleasingly European in its outlook, its airy dining room-cum-lounge studded with honesty bar and contemporary furniture, lifestyle magazines piled high in cosy corners. In the interest of research we tried out two differing types of accommodation: on the first night we stayed in a shiny 20-ft ‘rocket’ aluminium caravan, perched on the rooftop with enviable views over the many cupolas, spires and chimney pots. It was cosy, comfortable and when it rains – as it did all night – there was a surreal rus in urbis feeling of being stranded in the countryside.

On the second night we repaired downstairs to the hotel proper: a kingsize double, kitted out in really luxurious linen, it was a compact room with simple furnishings, good-size bathroom and courtyard views. After sleeping well, each morning we hit the specials board for smashed avocado on sourdough, sprinkled with pomegranate seeds, or golden-yolked eggs benedict with smoked salmon.

And lest we forget, the hotel’s location is a corker. Beyond its gates is atmospheric St Nicholas Market, dating back to the mid-1700s, all slippery flagstones, Jack-the-Ripper alleyways, indoor vintage clothing area, and streetfood stalls under the vaulted roof (Peckish? Try Bristol institution Pieminister or the acclaimed Grill Stock).

Nearby are the Christmas Steps, built in 1669, also recommended for their independent outlets, including a stamp-collectors, dress-maker and liquor store. Thirsty? There’s even a handy pub at the foot of the steps to refuel. Some things never change, at least.

It goes without saying not to miss the ubiquitous graffiti, and especially the Banksys dotted around, easily hunted down via widely available local maps and apps.

As well as the smaller galleries around Clifton and Stokes Croft, head to the harbourside for essential art space the Arnolfini, originally dating back to 1961 and housed in two floors of a 19th century Grade II-listed tea warehouse by the Floating Harbour. Then cross over the bridge to M Shed, a family-friendly museum which tells the story of the city and, ten minutes’ walk, the SS Great Britain.

Sure, it’s a world-famous tourist attraction, but as Brunel’s “ship that changed the world” its tale is atmospheric and captivating, the interactive smells, stories and sounds on board wholly memorable.

Right behind the ship is Spike Island, which programmes contemporary artists, with a useful cafe for the weary of foot. We rated its espresso, too: needless to say, top indie coffee places abound in the city, from specialist bean merchant Tincan in Southville to Little Victories on Wapping Wharf and East Village up in lovely Clifton Arcade.

We’ve stayed in Bristol several times in recent years, and almost every meal out has impressed, especially dinner at Flinty Red (which closed in late 2015) in Cotham Hill. From the current crop, the diminutive Wallfish Bistro in Clifton is a safe bet for classy West Country plates (newish Wellbourne from London’s ex-Dabbous team is also tipped by some). Meanwhile down in Stokes Croft is another fave, Poco, a dog-friendly tapas bar with wines by the carafe, central kitchen, flickering candles and – on our last visit – a tasty onglet special with crunchy spring greens and chimichurri. Arguably hipper is neighbouring Jamaica Street Stores, which opened last summer and looked very buzzy indeed. If you want real posh, you could try the Michelin-starred Casamia – but we haven’t forked out so can’t give you a verdict there.

Box E
Newish Wapping Wharf is a must for fans of all things indie, its converted shipping containers offering everything from vegan wine to local art and tiny diners. Box E, which seats 14, opened last year, and is flawless: we scoffed plates of beetroot, radicchio and hazlenuts, charred hispi cabbage with crab and lemon butter, and octopus, pickled fennel and preserved lemon. Top tip? Raw beef fillet with sesame, chilli and lime. 10 Cargo 1 BS1, head here.

Birch
Southville has a different feel from Stokes Croft or Gloucester Road, its thoroughfare, North Road, packed with cafes and independent shops. Be like the locals and have a snifter at the artsy Tobacco Factory, then head here for ace sharing plates: dry-cured fennel and cider salami with sourdough matched a negroni beautifully, while carrots, yoghurt, Berkswell and oats were all texture and creamy indulgence. Even better? A carnivorous pheasant pork pie. Raleigh Road BS3, head here.

Three Brothers
Superior 28-day aged Hereford patties are served on a boat moored to the northern river bank. It can seem frenetic upon arrival, with hordes clamouring at the bar, but it’s well-organised, with swift service. Top tip is the superior Blues Brothers, beef served as pink as requested, with caramelized onions and ‘Blue Monday’ cheese (by Blur’s Alex James). Slaw is crunchy and fresh, brioche is from Joe’s bakery on Gloucester Road. Welsh Back, Bristol BS1, head here.

Bargain Dinner: The Canteen
As Hamilton House, a building occupied by 200 artists and projects run by social enterprise Coexist sadly faces an uncertain future, you could do worse than support its lively and intensely popular Canteen. For a two-course meal for £9 it’s unbeatable, and all about sustainable, slow food. While there’s little choice our plates were tasty and good value: a curried carrot and parsnip soup, with local sourdough; and Moroccan lamb tagine with chick peas, sweet apricots and herby couscous. Well-priced wine, too. Hamilton House, 80 Stokes Croft BS, head here.

Sure, it’s impossible to be comprehensive about Bristol’s vast drinking scene, but worth checking out nearest Brooks Guesthouse are both the ancient Rummer (All Saints Lane), with medieval fireplace and decent cocktail list, and the classy Strawberry Thief bar on Broad Street (people rave about the MilkThistle, too).

Fancy something earthier? Down near Stokes Croft try the Pipe & Slippers (Cheltenham Road), No51 pub, and the Canteen (see above), which also has free live music every night. Up in Clifton cosy spots include the dog-friendly Albion or the tiny Mall (and for bridge views in the summer, the White Lion bar terrace). On St Michael’s Hill there’s Beerd, with its local ales, Psycho Pomp gin microdistillery (at 145) and cavernous Highbury Vaults (a must-visit) with its snug bar, leather bench seating and walled garden.

By the waterside? Try Wild Beer on Wapping Wharf for Wiper and True’s Peel and Stone (6.2%, one of 20 drafts), or head over to Corks for wine (one of three outlets in the city); while over in Southville the Bristol Beer Factory (est 2004) is a must, with helpful staff and delicious 6.5% Southville Hop IPA (served in handy third-pints).

Finally, the LGBT+ scene is fun, too: on Old Market are the Old Market Tavern (our tip), the Gin Palace and BBB; in the centre of town the clubbier Queen Shilling and OMG.