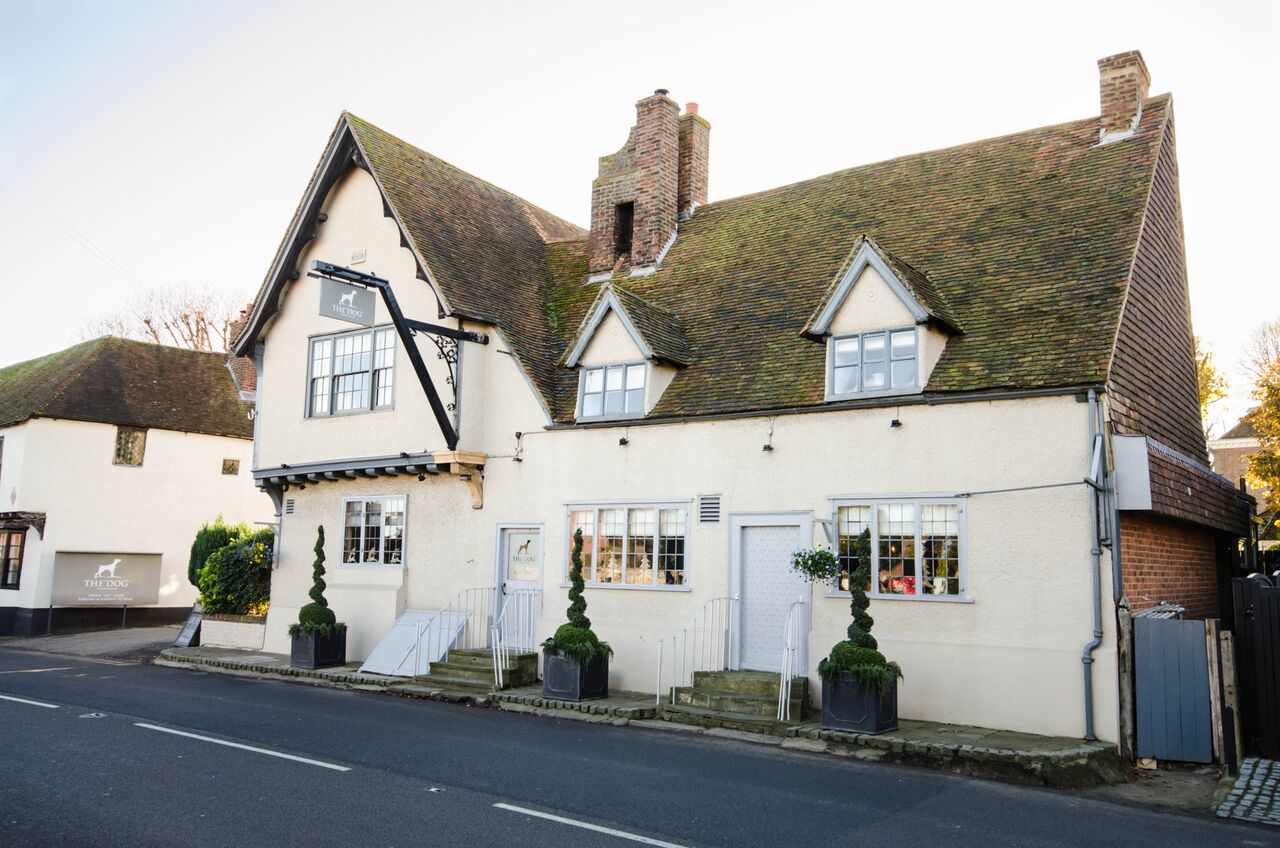 We’re stomping along the edge of a country road at well over four miles an hour. Our goal? A crepuscular pint in the neighbouring village of Ickham. The Dog’s general manager Marc Bridgen has helpfully offered to escort us: “It’s only a twenty-minute stroll,” he says, cheerily.

Turns out it’s a little more, but it doesn’t matter. As the sun sinks behind the spartan trees in distant fields, the vista giddyingly flat, with visibility for miles around, it suddenly feels like summer is on its way. A week ago, the country was buried under inches of snow; and, in fact, that’s still all everyone’s talking about round here.

But in Ickham we don’t hang about. Necking our beer within the wood-panelled confines of the Duke William, a cosy pub run by celebrated Kentish chef Marc Sargeant, we’re soon back on the darkening road to The Dog for dinner. “It’s better to get there before nightfall,” reckons Marc. He’s right, of course.

Of the cute cluster of villages nestling between Canterbury and Sandwich in east Kent, Wingham is the biggest, with a tourist-ready infrastructure which includes wildlife park, pubs, cafe and walks galore (see box, below). A settlement built along a busy Roman road, its jumble of architecture, from Georgian cottages to timber-clad mansions – our favourite is next to the hotel, proudly bearing the date 1286 – makes an attractive wander.

The Dog hotel and pub also dates back, astonishingly, to the 13th century. Bought by the Bridgen family nearly two years ago, they’ve attempted to restore as many features as possible while raising the food offer back up to the standard for which it was once known.

Owner Marilyn Bridgen has form, too, having recently overseen the interiors at the Crescent hotels in both Margate and Whitstable. This, she says, inspired her to buy The Dog – and, together with son Marc, the duo have reworked every square inch of the old pile.

Eight en-suite rooms range from really tiny boutique-style doubles, barely more than a bed, to suites. Ours is a capacious affair with ridiculously roomy four-poster and vaulted beamed ceiling. All the beds have swanky “posture-support” mattresses, deemed the most comfy in the world (we can vouch for that, awaking genuinely refreshed).

The ensuite has a rain shower, a distinctly calming way to start the day. And the view over the churchyard to the fields beyond? Well, it’s pretty heavenly.

Downstairs is a cosy bar, with full range of cocktails, as well as Kentish beers and ales. The restaurant and conservatory dining room are adjacent, while beyond is a Mediterranean-style garden, which we eye up enviously, although there’s no chance of alfresco on this visit.

Back from our three-mile jaunt to Ickham, we relax on comfy sofas with cocktails. There’s a group of us so we try several: a negroni is balanced precisely, an espresso martini kicks a smooth punch (yes, one of our party defiantly selects that as an aperitif) and we make a dent on the huge list of gins: recommended are Anno from Tonbridge, as well as the more aromatic Dockyard from Chatham.

Head chef Mark Kember’s menu offers up modern British dishes, with some world influences. A starter of seared tuna is rosily sliced, with a sesame crust, dab of wasabi mayo, and strands of pak choi and yuzu, the spicy Japanese dressing. Another of pickled vegetables matches the saltiness of manchego with the sticky crunch of walnuts, while a chunky duck and ham terrine is off-set by pickled fennel and aniseedy tarragon mayo.

Skate wing is a difficult fish to cook correctly: here it’s a satisfyingly thick wedge, adorned with a buttery crown of capers, gherkins and spring onions, leeks and golden-edged Lyonnais potatoes folded underneath. But I particularly enjoy the cauliflower risotto, made with burnt apple, black truffle and romanesco – that most fractal of vegetables – which carefully balances earthy, tangy and sweet.

Of course we devour desserts, too, a lemon tart with Grand Marnier cream just having the edge over a warm chocolate fondant with salt caramel and peanut ice-cream. And because it’s that kind of evening, we wash the whole lot down with (more) espresso martinis. It turns out they don’t affect our sleep, after all.

Half a dozen hungover faces groan at our table next morning, but a full English resets us skilfully: fried eggs, a meaty sausage, bacon, and copious pots of tea.

In short? It’s a true four-legged friend, this one.

Four things to do nearby

Grab a pint at The Anchor
Wingham boasts two pubs, a grocery stores, bakery and historic church. After a stroll round the timber-framed buildings, get a beer and lunch at the Anchor, dating back to 1645. Our ploughman’s was piled with thick-cut local ham, mature cheddar, apple, pickles salad. The pub also hosts popular live music nights. High St, Wingham

Get your beans
The oddly-named Politican’s Daughter is two minutes’ walk from The Dog and, on our visit, knocked up a smooth double espresso. They also do lunches, teas, and sell gifty nick-nacks, should you want to pick up any pressies. 32 High St, Wingham

Take a local hike
Beyond Ickham is pretty Wickhambreux and the stunning Stodmarsh Nature Reserve, a wetland with marshes, lakes and woodland. Stop at the Grove Ferry Inn for a waterside lunch before enjoying a pint back at the Red Lion in Stodmarsh village.

Have a day trip
The must-visit city of Canterbury is a few miles away, but for kids there’s also nearby Wingham Wildlife Park. And don’t forget world-famous golf courses, plus the seaside towns of Deal (pictured, read our guide here), Margate, and Whitstable; as well as riverside Sandwich.