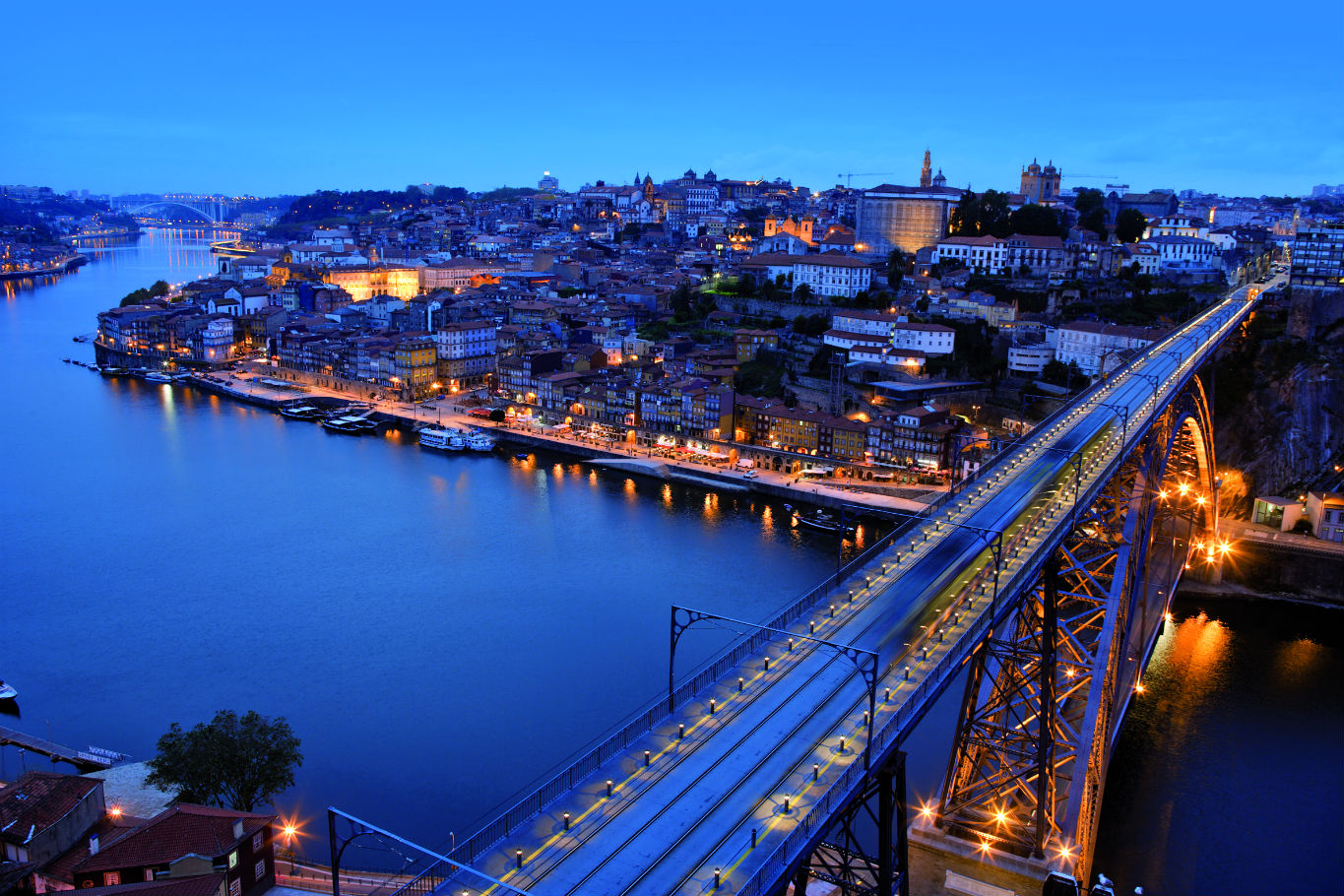 The hilly second city rivals Lisbon with its blend of cuisine, nightlife and striking architecture

An easy 45-minute Metro ride from the airport takes you into the historic centre of Ribeira: alight at São Bento (more on the impressive station later) and stroll down pedestrianised Rua das Flores, where you’ll catch a first glimpse of azulejos-covered buildings – the vibrant and intricately patterned ceramic tiles the nation is famed for. These glazed beauties date as far back as the 13th century, when the Moors invaded the land, and are a major part of the country’s architecture, to be found on walls, floors and ceilings.

Follow the cobbled streets down to the river, passing Jardim do Infante Dom Henrique along the way. Named after the centrepiece statue, Prince Henry the Navigator, these gardens are flanked by late-19th-century market hall Mercado Ferreira Borges and neo-classical Palácio da Bolsa (Stock Exchange Palace).

Cais da Ribeira, the waterfront walkway lined with al fresco bars and restaurants, is a hotspot for people-watching. Glance to the left: unmissable is iconic double-decker Dom Luis bridge, an imposing metal structure joining the two sides of Porto, between which is the meandering Douro.

An array of restaurants and bars can be found in this Unesco Heritage area. Pull up a pew at O Cubo (Cais da Ribeira 43B) and watch the street performers, whilst supping on a Super Bock, the Portuguese beer of choice. We like their craft selection, particularly the Bavaria Weiss – cloudy, and with aromas of cloves and spices, it’s fruity and refreshing.

See a sight or two

Porto is eminently walkable; hours can be whiled away wandering the colourful streets. First stop, São Bento railway station, with its detailed blue-and-white tilework that paints a picture of the kingdom’s past, depicting historical scenes.

Then head to Livraria Lello, a charming bookshop in Cedofeita with wood-panelled walls, an ornate, winding stairway and striking stained glass ceiling. Lover of Harry Potter? J.K. Rowling was apparently a regular visitor to the store when she taught English in the city; it’s rumoured to be the place where she gained inspiration for the wizardry fantasy novels.

From there it’s just a few minutes’ stroll to pitstop Casa Portuguesa do Pastel de Bacalhau. Munch on a cod fishcake filled with stringy Serra da Estrela cheese, and sip on a glass of nutty white port.

Skip the queues and the 240 tiny steps at Torre dos Clérigos, the tower from which you get 360º views, and head to hidden Miradouro da Vitoria, a scenic spot offering impressive panoramic vistas.

A steep tramp downwards leads back to the river: leave the bustling downtown and cross to the south side and the port wine houses of Vila Nova de Gaia. Look out for nearby street art Half Rabbit, a dramatic 3D installation by Bordalo II, created using rubbish. Its impact is quite the opposite.

And if you’re feeling peckish, nip into Beira-Rio Market, a modern space filled with food and drink outlets. We snack on a cone of cured ham from Taxca – salty, fatty and sliced on the thick side.

Book a winery tour: we choose Quinta dos Corvos, a small family-run business producing around 30,000 bottles a year. Our fast-speaking guide Maria (it’s 5pm on a Friday, we sense she may have somewhere better to be) talks us through production of the fortified wine as we explore the dark, cool space where the French oak barrels containing the syrupy liquid are stored. We learn that the caramelly white variety is best drunk chilled, as an aperitif on a balmy evening, whilst the tawny is richer, perfect as an after-dinner treat.

Food lovers will be in their element in Porto: musts are bacalao (salted cod) and francesinha (a gut-busting sarnie filled with meats, melted cheese and a beer-based sauce), alongside petiscos (tapas).

Or warm salad of plump, juicy shrimps with Iberian ham, still-crunchy sauteed pears and slithers of almond. Don’t miss the crème brûlée for dessert: spiked with rosemary, the subtle hints of pine filters through just as you wonder if the herb is going to emerge at all.

Portu’s is a hole-in-the-wall joint nearby: recommended are charred Padrón peppers (sprinkled with coarse salt), giant prawns in a fiery tomato sauce and specialities such as Prego no Pão (a small sandwich filled with garlicky still-pink steak) and curiously-textured alheira, an intensely smoky sausage made with beef, chicken and bread.

And what trip to Portugal could be complete without sampling the famous pastéis de nata (custard tart)? Those from franchise Nata Lisboa are our faves, layers of crisp pastry encasing the wobbly, just-the-right-side-of-blistered filling.

First up is Porto de Baião, a watering hole back on Rua das Flores, pouring ridiculously large glasses of vinho verde at a couple of euros each. Porto is a good-value city to visit in general, even with the exchange rate as dire as it currently is.

Sit and listen to buskers whilst you work through your bucket of vino, before sauntering to Baixa’s Cândido dos Reis, the quarter just north of Ribeira with Bierhaus for a relaxed vibe, and The Gin House, with more than 160 varieties, where the barman will rustle you up a spot-on concoction.

The majestic Douro Valley wine region is two and a half hours away on the train, but it’s a scenic ride, the tracks skirting alongside the river.

Alight at Pinhão to breathtaking views: a small village, it’s quiet and peaceful (first stop Régua is more built up). Indulge in a lazy lunch at Writer’s Place, with the picturesque terraced vineyards as a backdrop, and feast on the likes of roast goat and rabbit stew.

And you must take a tour of one of the many vineyards. Quinta das Carvalhas is a good option; an open-top bus winds its way up the narrow roads, ending with a tasting back in the main building. Alternatively, hop aboard a boat for a cruise along the water.

Well-positioned apartment B Places is located in the historic centre, a short walk from São Bento and reasonably priced (100 euro per night). Host Laura gives you the low-down (in perfect English) on her favourite corners of the city, and the studio is complete with kitchenette and small outside terrace. A decanter is left out with a small amount of port and two pretty glasses from which to sample it; a nice touch.

Don’t fancy cooking breakfast? Belos Aires, the restaurant next door dishes up brekkie for 9 euro a pop. Another decent option is nearby Mercador Café, a bright and airy spot to grab a coffee and a bite to eat; recommended is the smoked ham toastie and zingy freshly squeezed juice.