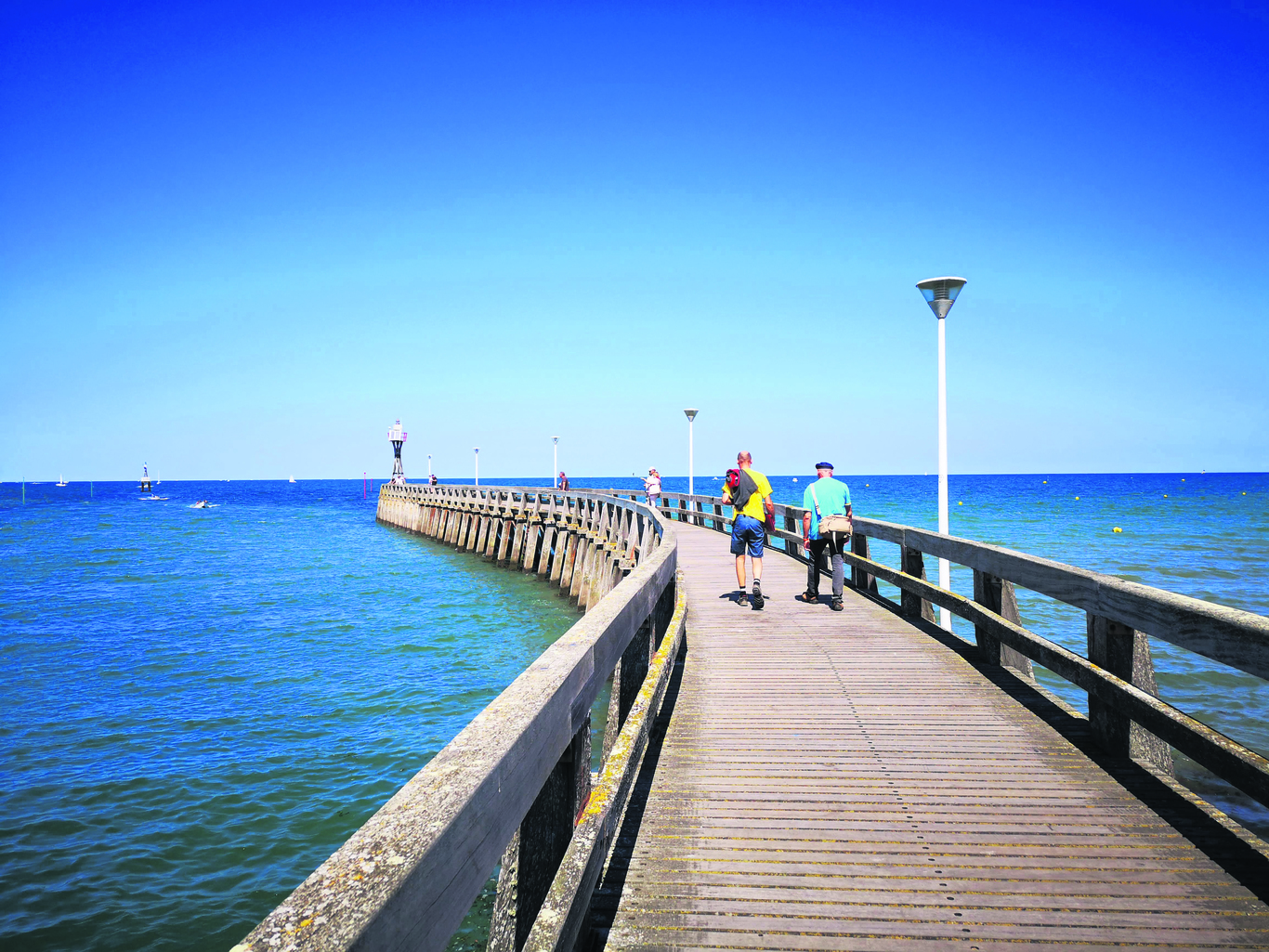 hether you’re a Normandy regular or not, I’d bet money that you haven’t visited the little known Côte de Nacre, just half an hour’s drive south of the ferry-port at Caen-Ouistreham (north are the more famous resorts of Deauville and Honfleur). And yet its quiet beauty – together with powerful history as the site of the Normandy landings – make for an introspective double act. Food for thought, if you like, while exploring the typically fine, if sometimes traditional, restaurants.

The necklace of towns and villages, mostly coastal, are all small and easily navigable: even in the largest, Courseulles-sur-Mer, where we stayed, it’s easy to wander down the snaking high street (Rue de la Mer), with its butchers, bakery, fromagerie and wine stores, to the pale sandy beach. A few minutes further is the appealing harbour, lined with eateries. In fact, water is seemingly every which way you look.

As we arrived at dawn on a Friday morning, fresh from the overnight ferry, the twice-weekly market was setting up: after a strong café noir at the tabac, we bought some local Calvados, perused the flowers, and ogled the colourful fruit‘n’veg, stopping ourselves from filling the car boot with outsize melons or giant cauliflowers. Equally enjoyable to peruse is the daily fish market right between the harbour and seafront, with its popular poisonnerie Angele, where you can gulp down a fresh oyster or scallop with a glass of wine.

In 2019 it’s 75 years since the 6th June 1944 Normandy landings – otherwise known as D-Day – took place along this stretch, with 14,000 of the 135,000 allies Canadians. Fast forward to the 1990s and Canadian D-Day veteran Garth Webb instigated an ambitious project to build what’s now the futuristic looking Juno Beach Centre.

Opened in 2003 to commemorate the war effort made by his nation, civilian and military alike, it’s the only one of its kind in Europe, thorough and uncompromising, with an unmissable final 15-minute film that’s incredibly moving in its depiction of young lives lost.

Whatever you know about WWII, it will make you think harder and deeper. We also liked the enthusiastic young Canadian guides too, many of which are the same age as the men who came to fight. Elsewhere along the coast are endlessly absorbing museums, memorials, bunkers, plaques, fortifications and pill-boxes.

Most restaurants offer standard variously-priced set menus – which makes sense for differing budgets, but inevitably tempt you upwards to the 22 or 29 euro (or even higher). Our best lunch was at L’As de Trèfle, a Michelin-rated restaurant on the road from Courseulles to neighbouring town Bernières-sur-Mer. Whilst not cheap (at least at weekends), its 39-euro set menu amounted to roughly six courses, including amuses bouches, all as captivating as paintings, and boasting zany combinations like whelks in pistou with peas, apple and beetroot sorbet, or raw mackerel with burnt meringue.

Elsewhere in Courseulles, breakfast or lunch at the sea-facing Crémaillère is a must, with its glass-box terrace to protect from the coastal winds; and Maison Bleue, which overlooks the oyster basins, as well as Le Mattelie, highly rated online but closed on our visit. Comptoir Gourmand is an attractive bistro on the high street, but its 16.90 lunch menu proved a little underwhelming, especially an overcooked faux filet with frites.

Unmissable for gastronomes is Degustation De L’ile, an extension of an oyster farming business from the Benoist family, who’ve been at it since the 1950s and even refine the molluscs in clean water pools next to the restaurant (all of which makes a pleasant aspect from the terrace). In an interior of muted shades, we shared a starter of hot oysters with juxtaposing flavours of sweet, sour-spicy and umami. Another plate of salmon nori-maki was smoked so powerfully you could taste the wood chips, with not-too-briny roe and a savoury brittle adding texture and contrast.

The mains continued the theme: a soft fillet of turbot in vivid red tomato and fish bouillon was seasoned by a parmesan tart with pickled red onion, and a blood-red duck breast with creamed potato, mushrooms and spicy honey sauce. The restaurant gets packed: make sure you book ahead.

As in many French towns there aren’t that many bars, per se – tabacs aside – but the terraces around the port are fun, especially Au P’tit Mousse, a popular afternoon spot to drink Pelforth (the French pale ale owned by Heineken), judging by several tables of enthusiastic drinkers; also recommended is La Pecherie, a historic spot for a cocktail.

But top choice is newish La Case A Kat, a quirky bookshop-cum-bar on Rue de la Mer that also serves boards of charcuterie. On a Saturday night, a quartet of singers were serenading drinkers over boxed wine and local beers (top tip is L’Ambree Du Hameau, a 6% craft beer from St Remy Sur Orme). A bohemian crowd was out in force in, too.

On a grey Saturday morning we embarked on a 45-min stroll over the dunes to next town Bernières-sur-Mer. With a nature reserve one side, and the wide sandy beach the other, it’s pleasing to see horses galloping by the shore, the smell of seaweed in the air. The seafront Père Tranquille – a sort of St Tropez-style beach bar and restaurant – makes a handy pit stop, before pausing at the memorial where Europe was liberated, and nearby Canada House. Take a trail up Rue du Regiment de la Chaudiere, with its history plaques, towards the picture-postcard village itself.

Of the other towns that dot the coast, a must is Saint Aubin-sur-Mer, its historic seafront and centre perfectly preserved, unlike many along the Côte de Nacre. Even on the overcast Saturday afternoon of our visit, we enjoyed gawping at the romantic architecture, all turreted pale pink gothic mansions and faded baby-blue villas, mostly shuttered up, with atmospheric alleyways snaking between the occasional antique shop and art gallery.

We enjoyed a pint at Le Crabe Verte before dinner at Papagayo, a laidback brasserie which dishes up juicy burgers (served on a potato galette), or a decent seared tuna with risotto.

Further towards Caen is Luc-sur-Mer, an old-fashioned family-style resort, rain-splattered on our visit, with a rickety pier and recommended bistro, Le Temps Des Mets (entrecote and frites is a snip at 18 euros).

And two miles inland is Douvres-la-Délivrande, which boasts a striking belle epoque pharmacy as well as the eponymous Chapelle Lalique, created by the famous French glass designer: both well worth seeking out.

This imposing chambre d’hote is La Cantellerie (22 Rue du Bassin). Built in 1868 and renovated in 2016 by young couple Elise and David Auvray, it’s an elegant three-story villa in Courseulles surrounded by spacious gardens on a quiet street between the main street and the port.

Breakfast is a delight: taken in the family’s dining room overlooking the walled garden (where fat chickens roam), it’s a very personal affair of homemade jams, pancakes, perfect baguettes, croissants, hams, cheeses, local honey – and even a granola that owner Elise was roadtesting for the first time.

We travelled overnight with Brittany Ferries from Portsmouth to Caen, sleeping in a berth that thankfully proved comfortable enough even on what was a fairly stormy crossing.

The ferry itself is equipped with lots of entertainment options of a family-friendly variety, including a cinema, as well as a surprisingly good wine bar, offering a classy chalked-up selection by the glass. The restaurant’s cooking surpassed what we expected, too, especially the double pork rib with stuffed rigatoni and seaweed gremolata pictured above. In short? P & O this ain’t. More info here.

For more info on the area, head to Terres De Nacre or Calvados here.