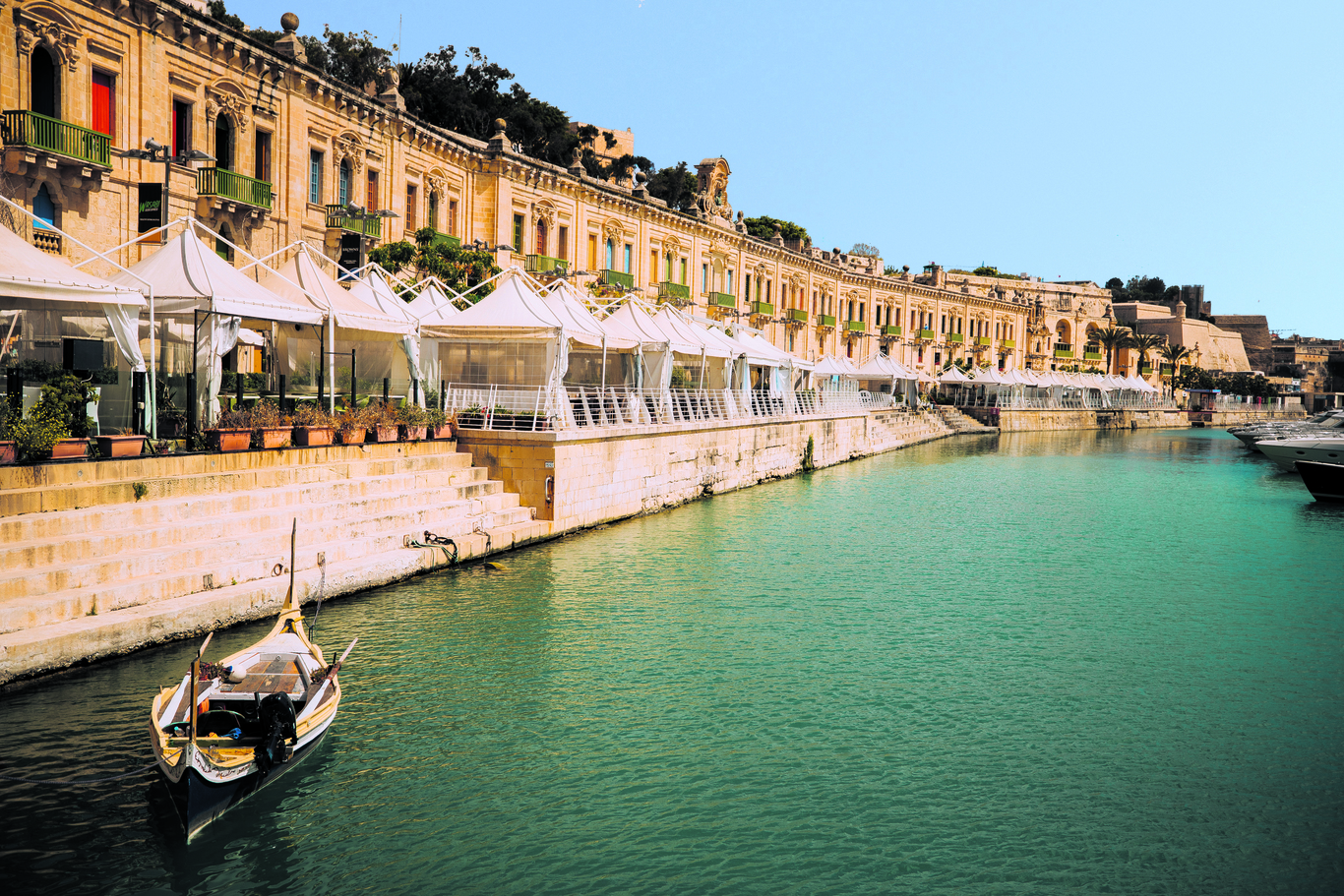 There are so many sights in Malta and sister island Gozo that my first thought was to sack off the lot of them and hit the hotel’s rooftop pool. Or perhaps lose myself in the appealingly hilly streets of the capital Valletta, pausing for a cocktail in the now-gentrified former red light district. But no: there were important destinations lurking amidst the glowing sunsets and exotic watery vistas. First impressions, however? The legacy of British culture is very visible: red phone boxes, M&S – and even Costa Coffee.

One of Europe’s first planned, grid-like cities – yes, it predates Manhattan – Valletta isn’t a UNESCO World Heritage site and 2018 European Capital of Culture for nothing. Roam its sloping streets, the sea always a glimpse away, and you’ll stumble across baroque piles with colourful balconies. After all, everyone’s had a go at ruling Malta, including the Knights of St John (for nearly 300 years until 1800) and then, of course, the Brits (until 1964, when it gained independence).

It makes sense to start your weekend at the City Gate, a 2013-built slice of modernity which, along with the Parliament building, was designed by Shard architect Renzo Piano. Continue past the former Royal Opera House (bombed in WWII, now an open-air theatre) and Our Lady of Victory, the city’s first church built in 1566, to Upper Barrakka Gardens.

This lofty vantage point is a prime spot to admire the panoramic views, take in the busy harbour below and, beyond, the medieval fortifications of the Three Cities (see below). Don’t miss one of the city’s most impressive thoroughfares, Saint Ursula St, swooping down from these gardens, with its boutique hotels, cool bars and restaurants.

It’s worth tackling the enormo tourist queues to visit the St John’s Co-Cathedral (so-called as the first on the island was built in Mdina, see below), its plain façade belying an ornate interior dating back to the 1660s. If you see nothing else, make for Caravaggio’s restored masterpiece The Beheading of the John Baptist in the Oratory, painted shortly before his death, with its heady chiaroscuro.

Back out on main drag Republic Street, get your bearings before a mooch over to St George’s Square, flanked by the Grand Master’s Palace (where Parliament was until 2015). And take a diversion to the #instagold City Lights cinema, which shows quirky and arty classics.

A Note on Casa Rocca Piccola
This private 16th century palazzo is a must. We were lucky enough to be shown round by Frances, the charismatic wife of Baron Nicolas De Piro, a noble family descended from the Knights who’ve been in Malta for over 400 years. She recounts anecdotes about chinoiserie, the art nouveau dining room, chatty parrot Kiki (who lives in the courtyard), and family paintings from the 16th century onwards. A highlight is the bomb shelter with its twisting corridors. More info. 74 Republic Street

For a lunchtime treat try Panorama at the British Hotel (267 St Ursula Street), a dining room overlooking the bay, with a slender terrace. The menu (starters €10+, mains €15) is loosely Italian: wafer-thin veal carpaccio, on a black truffle oil emulsion, is topped with pecorino, while fillets of swordfish are dressed in olive, tomato and capers, with herby green sauce to add zing.

For a splash out I rated newish Noni (211 Republic St), in the brightly-lit basement of a former confectioners. A short set menu (€55 for three courses) showcases exemplary dishes: tender octopus with pappardelle, preserved orange and kalamata olives; a rosy rib-eye on a smooth porcini puree, sharpened by a sauce bordelaise with charred spring onions. During the weekend, Maltese wine proved a real find, too: a tip is bone-dry Melqart, a blend of Cabernet Sauvignon and Merlot.

Drinking
Pints of local Cisk lager, brewed in Malta since 1929, are cheapish – about 3 euros. Or start proceedings with a G&T at Yard 32 (Strait St), which boasts 200 varieties (and chalked-up board of negronis). Nearby is Café Jubilee (Konvoj Ta’ Sta Marija), with its Belle Époque stylings: ornate gold-and-green panelling and Parisian lighting. If you’re an Oliver Reed fan, make for The Pub (136 Archbishop St), where he died filming Gladiator (it’s a shrine to the star with framed pics everywhere). Elsewhere, Legligin is a cute wine bar with tapas, or hit Alchemy for cocktails, or the LGBT-friendly Monaliza Lounge. Want to say cheers in Maltese? “Sahha”.

This is box title
Three food tips – from a local
Da Pippo (Melita St) has “no menu: you eat whatever they’re cooking,” says guide Clive Cortis, “go at noon to get a table.” Rubino (Old Bakery Street) is “Mediterranean foodie fare, with a daily changing menu on a blackboard,” while Balazzo Preca (Strait St) is where genuine locals go.” Clive runs maltaprivateguide.com

The cosy ancient walled capital of Malta, lamp-lit by night, pre-dates Valletta (going way back 4000 years to the Phoenicians). To get a real feel for the sandstone cathedral and central St Paul Square, visit late afternoon, when the crowds are disappearing, and Mdina’s twisting dark Arabic alleyways and crepuscular sidestreets will be yours, glimpses of azure sky like a gift. There are epic views at one end and much-photographed Mesquita Square at the other, where the key brothel scene in Game of Thrones’ first season was filmed. Incidentally, film buffs will be thrilled to learn the island has been a backdrop for dozens of Hollywood blockbusters, from Gladiator and Troy to Popeye and recent celeb-fest Murder On The Orient Express.

Across the bay is the hub of Sliema and Saint Julian’s, which emerged as a resort in the 1980s and 1990s, all luxury hotels and towerblocks. However, the residential locale around The Palace hotel, where I stayed, is more than agreeable, with its steep streets of candy-coloured Maltese balconies.

Eating? Avoid the cafes on the promenade, overlooking the rocky beach, unless you want tourist-magnet fare, although they’re pleasant for a drink. Just behind is Al Solito Posto, a throbbing pizza joint, packed on a Monday night visit, where a decent Napoli pizza costs €7. And Kebabji is a Lebanese grill on the seafront that serves a generous chicken shish salad for a tenner, with colourful beetroot, tabbouleh, chopped salad and curried rice.

To drink? My fave was Hole In The Wall, a cool corner bar with beardy bar staff and young crowd: the oldest in Sliema (dating back 90 years), it’s as good a spot for an artisan coffee as a craft beer with comic strip wallpaper, low tables and rock soundtrack.

Walk it all off to Saint Julian’s Spinola Bay – where Napoleon reportedly landed – with its upscale sweep of smart restos, bars and terraces. Stroll past scenic bays and cafes, admiring the palm trees and lower promenade dotted with cats, cacti and rocky crops.

A day trip to this smaller island north of Malta requires a little prep – it’s a 45-minute coastal drive up to Cirkewwa, then a 30-minute crossing to Mgarr (note: you pay on the way back). But it’s worth it: Gozo is more laidback than its larger neighbour, with dramatic coastlines and a plethora of ancient structures. Most notable are the Ggantija Temples, the oldest man-made giant structures in the world, erected 3600 BC and predating both Stonehenge and the Pyramids.

On our visit, the sun burned as lizards crawled over the limestone megaliths, my guide Audrey Marie pointing out where animals were sacrificed on the main altar, suggesting the importance of rituals, and libation holes in the floor where blood may have been poured.

Restored with EU money, the Citadel in Gozo’s capital Rabat, with its bulwark castle, proved an extremely peaceful Sunday afternoon jaunt. With only two families living there and two restaurants – plus no cars – it’s a “genuine silent city,” said Audrey.

Arguably the most atmospheric spot on the island, however, is where a 20-metre high arch called the Azure Window stood in Dwerja, before it collapsed into the sea during a storm last year. It’s an energetic scramble over crater-like topography; behind is the scenic Inland Sea, a landlocked body of water.

Hungry now? We were: and restaurant Te Philip is so notable that on our visit the Prime Minister and his wife were entertaining there after a charity bike ride. We shared antipasti of fresh Gozo sheep’s cheese, smoked sausage, and various salamis, bresaola and hams, all piled on bread smeared with kunserva, a sun-dried tomato jam. The restaurant specialises in slow-cooked meats in a wood-burning oven: eschewing the more obvious pulled pork or lamb the owner advised I try local goat’s kid, its gamey braised flesh falling off the bone. And what else to wash it down but lashings of Gozitan wine?

This medieval area – one of the Three Cities, occupying the two peninsulas opposite Valletta – is less on the tourist trail, but crossing from Valletta to its harbour on a dghajsa, a gondola-style traditional wooden motor boat, is magical. The port at Birgu is photogenically packed with yachts, and the historic centre, Collachio, untouched. Escorted by my guide Nikola, a wander proved a real high point of the trip: entering through the Three Gates, lined with dominating palm trees, we explored the narrow streets, the preserved medieval Norman House, and tucked-away galleries.

It was getting late: we ended up admiring the views from the Gardjola gardens in neighbouring Senglea back over Valletta – before a final meander along the waterfront, just as the sun was dipping.

It’s 5-star all the way at this modern hotel well-placed in Sliema, a few minutes’ stroll to the short ferry hop over to Valletta. Rooms are echoingly spacious with luxury bed linen and balconies offering wide views over Malta (on one night I watched a jaw-dropping thunderstorm over the sea), and there’s an infinity pool on the top floor as well as huge sun-bathing terrace, several award-winning restaurants and bar.

A pleasant courtyard bar makes a refreshing spot for breakfast, a sprawling affair of fruit, salads, hams, cheeses, an on-hand chef to cook you eggs any-which-way, as well as a bread station, sweet stand and fresh sushi. You won’t need lunch.

Rooms start from £95 per night, more info: thepalacemalta.com. Flights to Malta from Southend start from £110 return with Air Malta.

This feature was arranged with the help of Malta UK. For more info on Malta & Gozo head here: maltauk.com