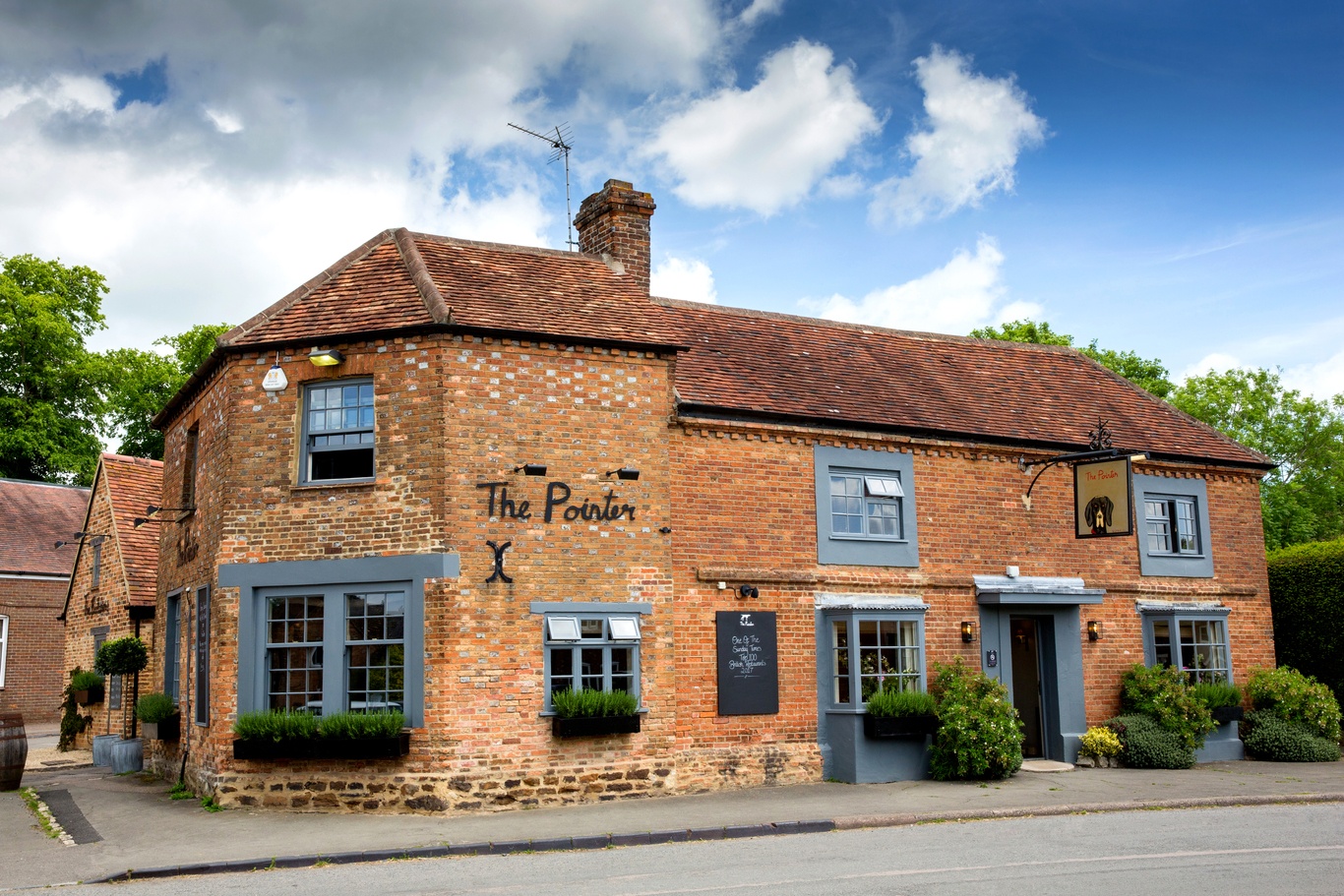 Where, exactly? Just over fifty miles north-west of the capital in the sleepy hamlet of Brill. Named after the family that once owned it, this rural retreat is an hour-and-a-half’s drive through the Chiltern Hills Area of Outstanding Natural Beauty. But we opt for the fast train from Marylebone, alighting at Haddenham and Thame after a mere thirty-five minutes. There’s a local bus from the station, but a friendly elderly couple informs us it leaves infrequently so we jump in one of the waiting taxis – and fifteen minutes later we’re checking in.

Interior: Discuss. The red brick exterior of this 16th century pub gives way to a homely space inside, with two roaring log fires, beams strewn with dried foliage and comfy sofas to slump into, upholstered in jazzy, patterned fabric. Specially commissioned artwork by Robert James Clarke adorns the walls: known for his ability to “capture the essence of the dog” (so it says in the blurb), many of the pieces feature, um, canines. There’s a sizeable garden with plenty of blankets to keep guests warm on January days, whilst the restaurant out back is light, airy and inviting; look out for the impressive pheasant feather garland.

What’s good about the bedrooms? Just across the road sits a second building where these are housed – four in all, over two floors. Ours was a large, characterful deluxe on the ground level, decorated in soothing grey tones with pale wood furniture. The bathroom was almost as big, home to a pair of sinks, freestanding roll top and huge rainfall shower. A Hypnos bed cried out to be laid on: we did just that and whiled away a few hours watching Netflix on the wall-mounted telly. Thirsty? There’s an in-room Nespresso machine plus a fridge in the hallway filled with milk, still and sparkling water.

Anything on the snagging list? Our huge bed was actually two singles pushed together – a pet peeve, in fact: surely it’s not too much to ask for a double? And the WiFi connection was a bit patchy, with general mobile service up and down. But, this is a place to get away from it all. Who needs their bloody phone?

For dinner? Start with an aperitif: for a local tipple, order a flute of Dinton Folly, a dry and well balanced fizz made just twenty minutes eastwards. Or pick something from the comprehensive wine list. Food-wise, it’s modern British all the way, with much of the fruit and veg coming from the kitchen garden and meat from their farm, just down the road in Ludgershall.

The highlights? A densely packed pork pie with a thin layer of jelly separating the peppery meat from top-quality pastry served alongside runner bean chutney, an inventive accompaniment; and a ruby-hued haunch of venison from fallow deer with a slick of creamy celeriac puree and plump blackberries. We pair it with bottle of French Lirac, a silky red.

What’s the service like? Friendly and polite: the young team is enthusiastic and eager to please.

So let’s talk breakfast. Well-executed and plentiful: an array of continental goodies sit up on the bar, with the likes of homemade jams, sourdough, pastries, cereal and freshly squeezed juice. Plus DIY Bloody Marys – hair of the dog, anyone? Yes please. Guests help themselves whilst awaiting their cooked offering, in our case a full English made with sausages from the farm. A surefire hearty start to the day.

Anything else of note? There’s an on-site butchers stocking a variety of meats: we spy other weekenders armed with packages to take back home with them. And green-fingered locals can swap their homegrown products for beer or vino in a scheme called Pints for Produce – a nice touch.

Keen to get out and about? If, like us, you make a weekend of it and stay for two nights, The Pheasant pub is a worthy alternative for a meal. A short stroll away, they serve quality grub in a laid-back environment. Fancy taking a ramble through the countryside? Walking routes are in abundance: we make for the windmill (see right) and take the circular route through farmland, south into Little London, across to Leatherslade Farm and then northwards back to where we started. Be warned, some sections are along rather narrow, windy roads. For a pit stop elsewhere, drop in at Vale Brewery – just a mile away from The Pointer, head to the tap room and sample one of their ales.

Rooms start at £130 per night including breakfast, at 27 Church Street, Brill, Aylesbury HP18 9RT. The kitchen is closed on a Monday. More info here.