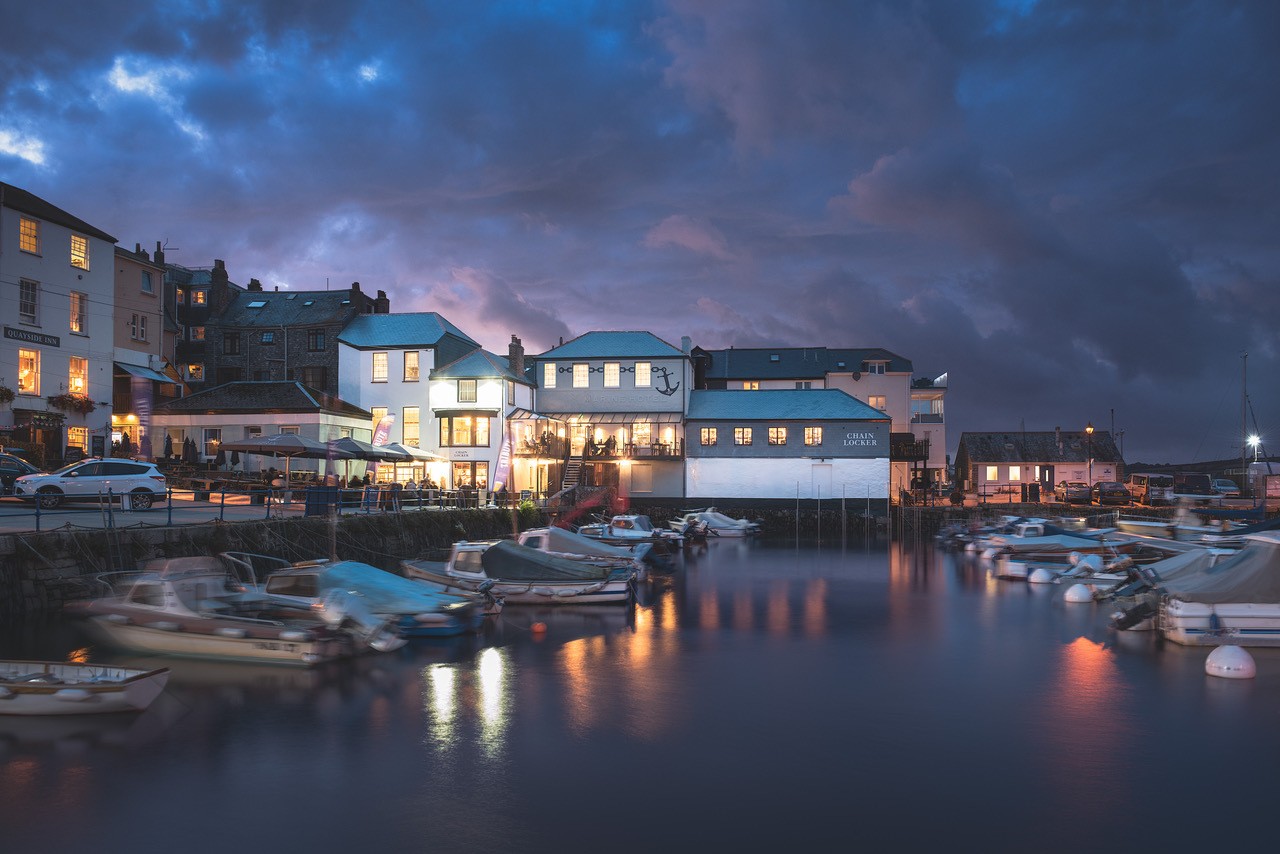 It's so much better in the autumn, said every local we met. They weren't kidding

As the only university town in Cornwall, and largest port too, the southern resort of Falmouth has a distinct energy. Not to mention a microclimate that makes it even more appealing at this – thankfully less touristy – time of year.

Its geographical uniqueness is underlined by its two photogenic sides – one facing the River Fal, the other on the sea – so you can flit between bustling docks and sandy bays as you please.

On the warm October afternoon we arrived, the flagship Gyllyngvase Beach was busier than expected, with its views over to Pendennis Castle, built by Henry VIII: the summer restrictions on dogs just lifted, locals were audibly celebrating with pooches darting about in all directions; even our own very old Jack Russell appreciated the scene, sitting demurely on the sand.

And best of all, dozens – yes dozens – of people were swimming, without wetsuits. We joined them: yep, it was a bit nippy.

As if to accentuate the faraway feel, tropical plants and leafy palms dot the verdant parks behind the beaches, while a short walk around the coast towards the smaller Swanpool Bay, which we did after breakfast the next morning, is a blustery must.

Our hotel – St Michael’s Resort (see box below) – was on the sea-facing side of town, a fifteen-minute amble from the town and harbour, impressively the third deepest in the world. This is the oldest part of Falmouth, all narrow streets, hidden courtyards and crouching buildings. Don’t miss Prince of Wales Pier, a fine spot to look out over the hundreds of boats.

Whether it’s the effect of second-homers, shedloads of visitors or the fast-rising student population – the uni specialises in art and design – the town is an indie retail paradise, another lure off-season. Two thoroughfares to target are Arwenack Street and High Street, for rummageable secondhand Bookmark Books, Wild Pony vintage clothing, Tall Ships’ local gifts, and interiors at Willow and Stone and Cream (we loved the shipwreck-print lampshades). A fave store was Little Warehouse 13, which combines both carefully curated 90s streetwear and one-off interiors pieces.

A note on… Maritime Museum

This hangar-like space tells the story of the Falmouth Packet Service, which operated between 1689 and 1851, its purpose to carry mail to and from Britain’s expanding empire. You can ogle various lifesize replicas of boats dangling from the ceiling, while current exhibition Titanic Stories is a fresh look at why the events of 1912 continue to capture our imagination. As well as a café with views over the harbour, outside is a line of quirky indie restaurants and bars to grab a coffee or cocktail afterwards.

As an all-round creative kinda place – hell, it’s starred in a million movies and is even the birthplace of Wind In The Willows – there are numerous galleries to potter round, such as Beside The Wave (Arwenack St), but head to The Moor, the ancient square in the heart of town, home to the free Falmouth Art Gallery. On our visit the display was small but boasted big hitting names like Ben Nicholson, Lichtenstein, Picasso, Mark Quinn and Henry Scott Tuke.

Now, get your beans

Need some caffeine? Try Beacon Coffee – considered by some to be the best brew in Cornwall – on the picturesque sloping High Street; equally worthy are nearby Espressini and Good Vibes, both on Killigrew Street.

Falmouth is a foodie stronghold, however on our Sunday-Tuesday stay some of the more acclaimed restaurants like Oliver’s (High St) were closed, as was the hip Nude Canteen (Killigrew St) and much-tipped candlelit subterranean Verdant Seafood bar. Fish and chips fans, by the way, should head to The Harbour Lights on Arwenack St.

Indidog opened on the waterfront this summer, a former sports bar reinvented as contemporary diner with a sea-faring aesthetic, long open kitchen, mismatched design chairs and Jackson Pollock-style toilets. Pretty plates of well-seasoned tempura veg and crisp-skinned mackerel and celeriac preceded a fillet of sea bream draped over a Greek salad of salty feta, crunchy raw veg and capers which, we agreed, shouldn’t work but did. Confit duck, meanwhile was meltingly tender, with that all-important crispy skin. And service was super-smiley. A must.

Star and Garter (High St) is a small, stylish gastropub whose views are as stunning as plates like woodfired aubergine with chickpea red pepper and dukkah, or creamy cod’s roe on sourdough.

Brasserie On The Bay at St Michael’s has panoramic views just tempered, it must be added, by the building work downhill. But the food impressed: scallops with sweetcorn, lemongrass and coppa ham, an umami-packed crab risotto – light and zesty from preserved lemons – and a pillowy rump steak, ruddy within and easily-sliced. Even a side of broccoli was spectacularly charred.

Post-swim we grabbed the last spare spot on the terrace at Gylly Beach Café to feast on chilled albarino and superlative baja-style hake tacos with pickled cabbage, creamy avo and chipotle mayo; in the evening the candles are lit, transforming the white-space interior.

As you’d expect, it’s a town of eclectic watering holes: our first port of call was Chain Locker, just revamped with terrace high above the deep turquoise harbour. Inside is all cutesy seaside memorabilia, from interior framed knots to lifebuoys on ceiling.

Just further down the main street is Beerwolf, a mix of artfully lit bookshop and boozer, filled with students studying laptops by day on church pews, and an arty German beer-supping crowd by night or playing on vintage pinball machines within its wood-panelled nooks and crannies.

The Moth and the Moon is a top tip for cocktails, with its green banquettes, moody oil paintings by Jo King and suppable negronis (not to mention towering views from its steep-stepped terrace garden).

And an instant hit was the cobbled Old Brewery Yard, whose ground-level bar Hand serves local craft beer (such as Verdant) and, upstairs, the unmissable Chintz Bar serves up pure #instagold kitschness, from secret rooms and upright pianos to plastic toys and chandeliers.

St Michael’s Resort is an 84-roomed complex housed in two buildings, dating back nearly a century, in the affluent newer part of town. It’s set in dense gardens lined with all manner of exotic plants, bamboo and palm trees, perfect for a pre-dinner stroll. It would be paradise – except for the new complex currently being built just in front; the building site doesn’t entirely diminish its charms, but it’s worth bearing in mind.

Happily the newest block of rooms – the whole resort was relaunched only a year ago – has spacious rooms facing the ocean and road; ours boasted a wonderfully comfy kingsize, Egyptian cotton sheets, walk-in rain shower and private sea-view balcony. It’s also dog-friendly so your furry friend, if she’s anything like ours, will clamber straight onto her own outsize pillow provided.

Downstairs is a health club, with attractive swimming pool, as well as sauna and steam rooms, all included in the room price, while in the main building is the health spa, charged separately, with a relaxing hydrotherapy pool (heated at 35 degrees), as well as outdoor hot tub and sauna with sea views set in the gardens.

Brasserie aside, we liked the look of zen-like Garden Kitchen (although didn’t have time to eat there); it serves healthy fare such as buddha bowls in its bucolic setting.

Rooms from £110 per night (Beach House from £150), based on two people. A ‘Sunday Sleepover’ offer runs until the 24th November 2019 at £80 per person per night (Beach House £95 a night), including a classic king room, 3-course Sunday lunch or dinner, full Cornish breakfast, and complimentary swim & gym access. More info here.

This feature was arranged with the support of www.falmouth.co.uk. Check the site out for even more things to do in the area.

Next week: we check out Newquay on the north coast