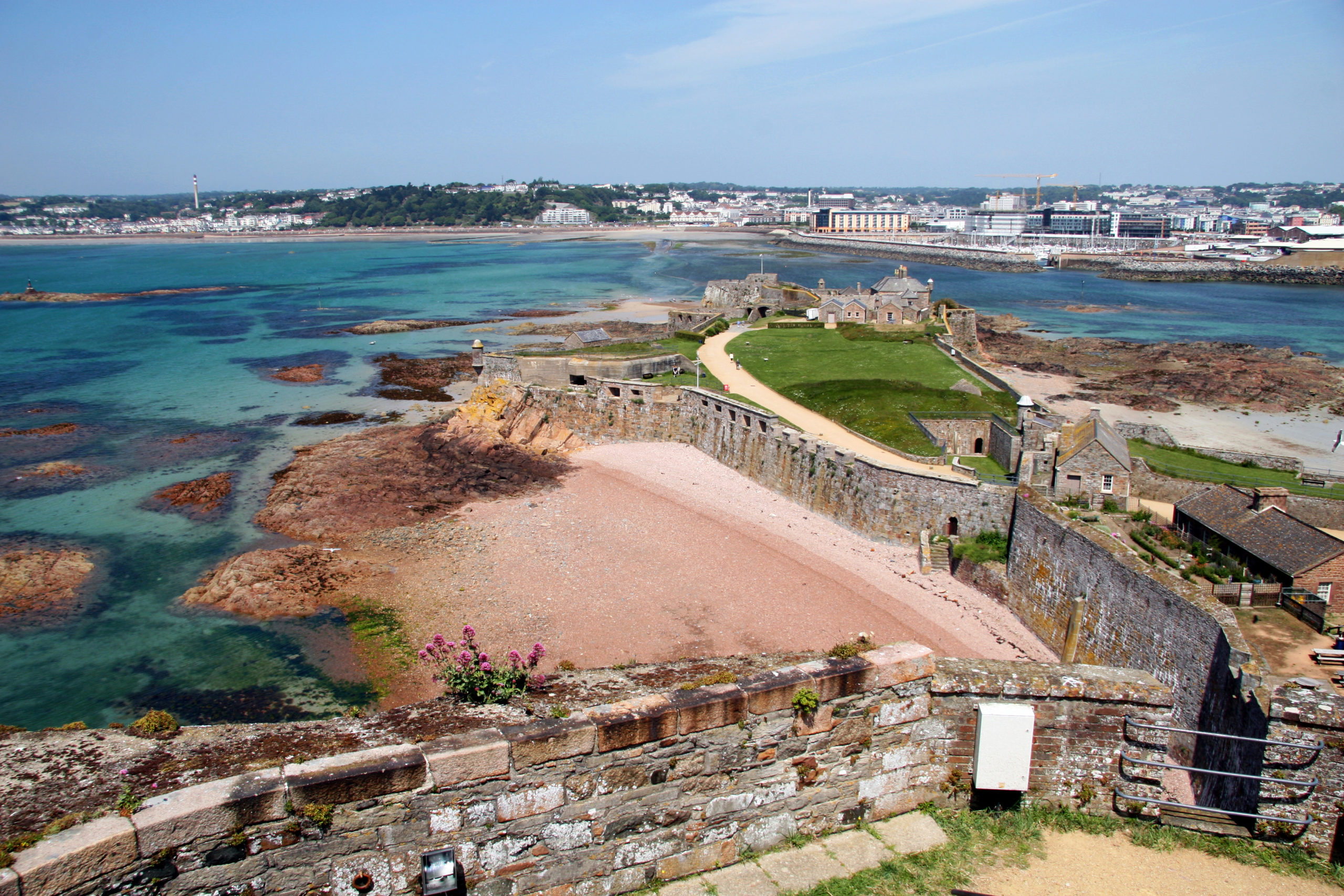 When the tide is out, Hermitage Rock is connected to Jersey’s main town by a 1km causeway, snaking across the sand flats. At high tide the rock regains its island solitude that once attracted a devout hermit named St Helier. He was martyred here by pirates in 555.

Nowadays the rock is connected by a breakwater to Elizabeth Castle, a larger tidal island that has been heavily fortified since the 16th century. The castle is a major tourist attraction on Jersey, and a ferry crosses regularly from Saint Helier, the island’s capital, when tides cover the causeway.

The castle and hermitage are managed by the Jersey Heritage Trust and you need to buy a ticket to enter the complex. The breakwater that connects the hermitage to the castle was built in the 19th century and can be crossed whatever the state of the tide.

St Helier’s little stone hermitage is perched attractively atop a craggy rock in the middle of the breakwater. This tiny, single-room chapel was built in the 12th century to enclose the saint’s living quarters. A rocky enclave on the left-hand side is known as St Helier’s Bed. It looks the right dimensions for a compact sleeping place, the rocky overhang providing some protection against the elements.

Unfortunately the hermitage gate is kept locked, although you can climb the steep steps and look through the bars. Churches from all denominations hold a pilgrimage walk here on the Sunday nearest his saint’s day, 16 July. They lay a wreath at the door and hold a short, open air service. There is plenty to see in Elizabeth Castle, including an exhibition of local history.

In the middle ages there was an abbey where the castle now stands, dedicated to St Helier. It was closed at the Dissolution and the buildings converted to military use.

But what’s the backstory? St Helier was originally from Belgium but fled after his father took exception to the local priest and murdered him. He ended up in a monastery on the French mainland near Jersey, working under the direction of abbot St Marcoul.

Jersey’s community of fishermen asked the abbot to send them a missionary, and St Helier was chosen. He lived in monastic seclusion on this rock for the next 13 years, sending his companion St Romard to and from the fishing village to minister to his little flock. On one occasion St Helier’s prayers healed a lame man on the island. At the time the island community was vulnerable to attack by sea raiders.

From his vantage point on the rocky isle, St Helier would look out for approaching sails and signal to the villagers if he spotted danger, giving them time to hide. The saint paid the ultimate sacrifice while shielding the villagers from one such raid in 555. Unable to escape himself, he was caught on his rock and beheaded by the pirates.

His hagiography records that he picked up his decapitated head and walked to Jersey’s shore. St Romard later found his companion’s corpse holding his severed head. He returned the body to mainland France, and a healing spring at Brévillesur-Mer arose where the martyr’s body rested overnight.

St Helier’s hagiography is called The Passion of St Helier, written in the 11th century. Historians have spotted several flaws in its chronology, and some of the details seem borrowed from other saints. However, a hermit called St Helier certainly lived on this rocky outcrop. We have very limited records for the 5th and 6th centuries in British history: this saint is a useful reminder of the role Christians from continental Europe played during these dark ages.

St Helier might be surprised to find himself in a book on British holy places. But Jersey is part of the British Isles, even if not part of the UK. It might eventually end up as an independent state, but St Helier will no doubt remain patron of the island he died to protect.

Directions: Elizabeth Castle is on a tidal island called L’Islet. At low tide it can be reached by a 1km walk along the causeway, which starts on the seafront in St Helier town, by the junction of the A2 (Esplanade), the A1 (St Aubin’s Road) and Peirson Road.

The causeway is likely to be dry for about five hours around low tide. Jersey has one of the world’s highest and quickest tidal variations: don’t attempt to race across the causeway if it is close to vanishing beneath the waves. The ferry is frequent and only takes 10 minutes. Tickets can be bought at either side of the crossing. You will need to buy a ticket to Elizabeth Castle, price £12.70 adult/£8.25 child for castle only, or £15.65/£11.20 castle plus ferry, concessions available.

The hermitage can be reached by walking the length of the castle grounds and then out through a gate on the far side. Elizabeth Castle is open from mid March to end Oct 10am–5:30pm. A sign when I visited indicated that the gate to Hermitage Rock and the breakwater closes at 5pm.

This is an extract from Britain’s Pilgrim Places by Nick Mayhew-Smith and Guy Hayward, which is out this month and published by Lifestyle Press (£19.99). Find it here

Please support us if you can

Can you help? With the sad demise of our free monthly print titles across London last summer due to advertising revenues in freefall, we now need your support more than ever. Every contribution, however big or small, is invaluable in helping the costs of running the websites and the time invested in the research and writing of the articles published. Please donate here for less than the price of a coffee. Thank you.