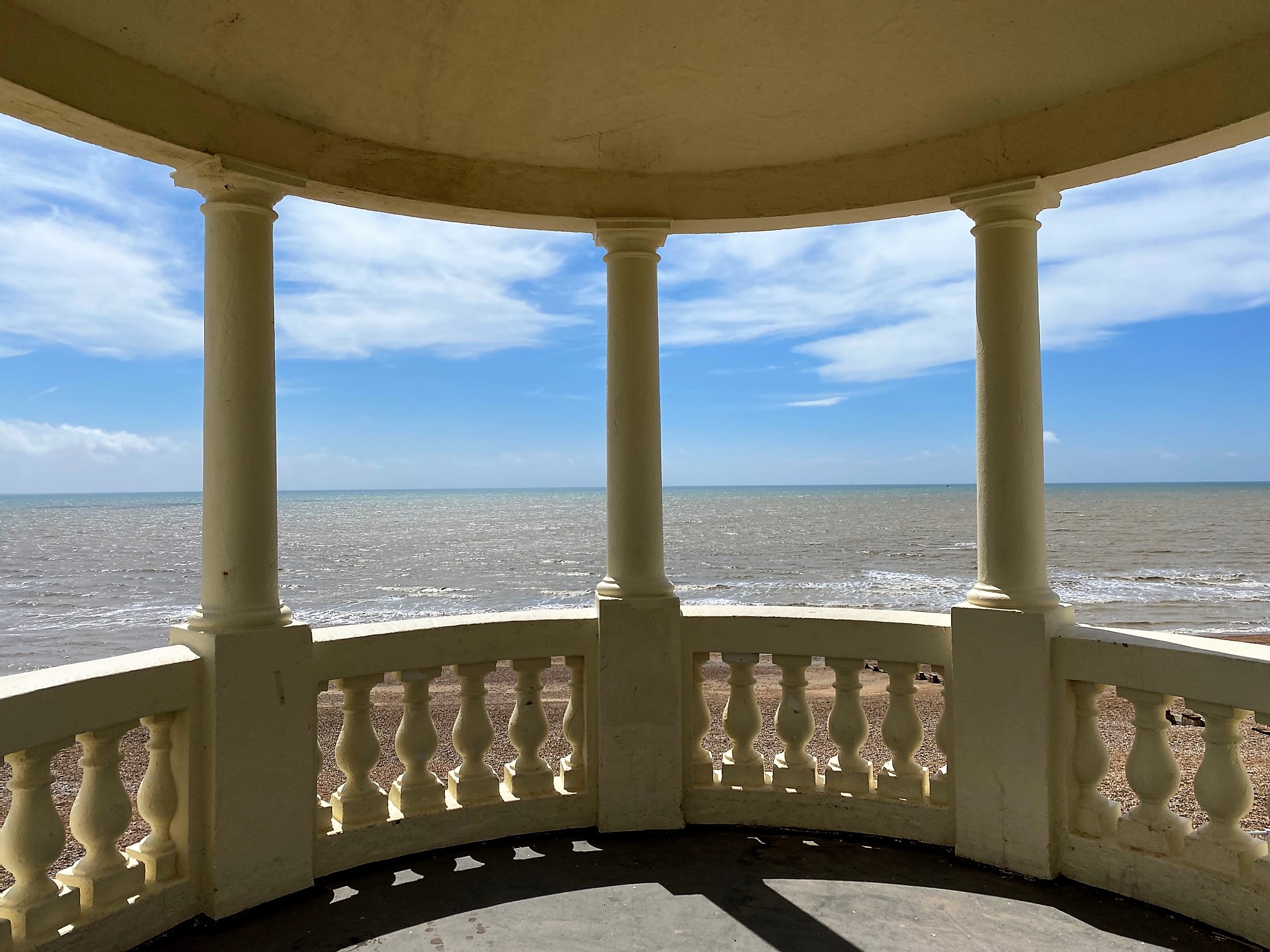 If life is all about juxtaposition, then nowhere is this more apparent than sleepy Bexhill-on-Sea. An ancient old town with purpose-built Victorian resort.  A quiet place with a loud art gallery. Very English, but with a touch of the continentals. And where Keane, a nearly-local band, even named a single after its Sovereign Light Cafe on the seafront.

Bexhill-on-Sea was built mostly in the late 19th century as a health-giving resort popular with tourists by the 1890s. It’s the waterfront sister to a settlement a mile or so uphill dating back to the eighth century and awash with clapperboard buildings, some medieval.

Somewhat unkindly known by some as “God’s Waiting Room”, Bexhill boasts apparently the highest percentage of centenarians for its population in England and Wales.

But let’s face it, that seafront – with its masts clinking in the breeze – is to die for. There’s the atmospheric Colonnade, all artisan shops and cafes; water fountains filled with the shriek of little kids; and a landscaped promenade, entitled Next Wave. And you can stop to admire the view over the distant bulk of Beachy Head, or one of the gardens of the privileged that lick the shingle beach.

The De La Warr Pavilion is the reason for many visits. A vast ship-like building in the art deco style – and one of the first major modernist public buildings in Britain – it was constructed in 1935, designed by the architects Erich Mendelsohn and Serge Chermayeff, winners of a competition thrown by mayor and socialist Herbrand Sackville, the 9th Earl De La Warr.

Suffering in the war, the Pavilion declined until the mid 1980s when it was Grade I listed, preventing further damage; but it wasn’t until 2002 that a £6 million grant by the Heritage Lottery facilitated its re-opening in 2006 as one of the south coast’s largest contemporary art spaces and cafes.

Architecturally it’s a dream; in fact, everything about the De La Warr is successful. Don’t miss Holly Hendry’s Invertebrate, an eye-catching outdoor artwork and one of this summer’s Waterfronts installations by England’s Creative Coast. She has an accompanying show inside the gallery too, both free of charge. Find out more here.

For lunch, the De La Warr cafe is in prime position, with its direct sea views and modern light menu. Nearby is Pebbles On The Beach, a shellfish-focused bistro with terrace right overlooking the beach. Elsewhere, for fish and chips on the seafront try Minnie Bertha’s, for an espresso the Colonnade cafe (sheltered too), while decent grub is to be found at Latin American haunt Sobremesa, Bistro 45, and popular restaurant on the corner of the seafront, Trattoria Italiana, often packed to the rafters.

On our most recent visit this month we enjoyed tender spiced chicken from the well-priced lunch menu at Rocksalt (no relation to the Folkestone fine dining restaurant), with nicely distressed furniture, and most options under a tenner; fish and chips is £13. Afterwards, head uphill towards the station for a pint at the cute Brickmakers Alehouse on Sea Road.

Start at the Colonnade in front of the De La Warr, with its various craft shops and cafes, then potter round the interiors, vintage and gift stores in the town centre behind. Second hand record and book shops especially are clustered on Sackville Road (with names like Records & Retro and Second Spin).

Climb up to the Old Town to see the Bexhill Stone in the hill-top church, and gawp at the clapperboard houses; or try the motoring “heritage” trail (a 4 mile walk guided by seafront panels). We took a five mile seafront amble over to St Leonard’s, an easy wander with gentle rolling cliffs and miles of flat path.

Try the Towner at Eastbourne, which opened in its present space in 2009, while the resort is also a pleasant enough diversion, especially the Little Chelsea and seafront areas.

Recent addition The Driftwood is the hip new boutique hotel, while Coast Bexhill also offers stylish B & B. On our last overnight visit we stayed at the Buenos Aires Guest House, an attractive Victorian semi. More info here.  Getting There: Take a train from Victoria or St Pancras, around 1hr35, costing around £45 return off-peak on Southern Railway.