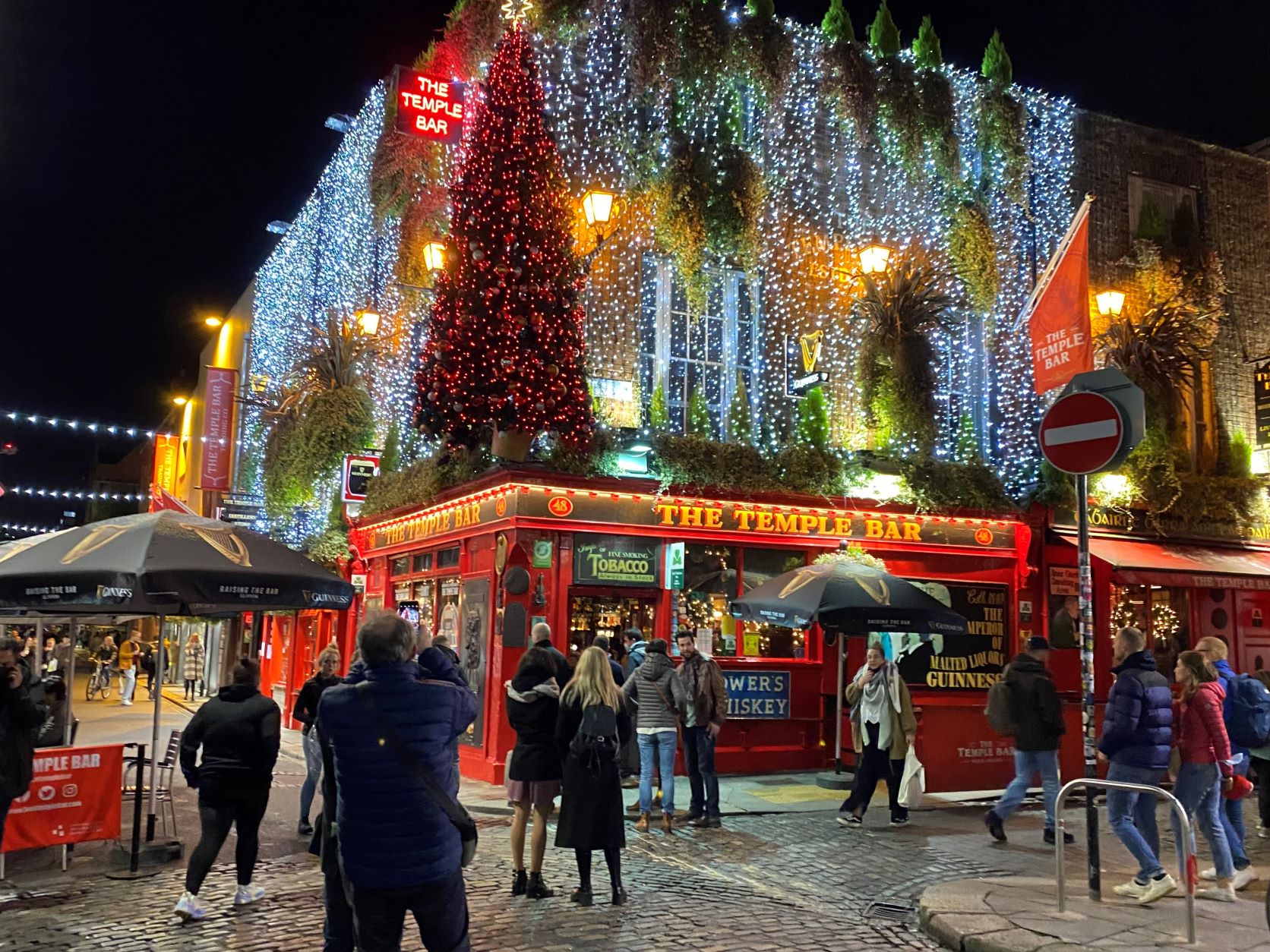 A Beginner’s Guide to… Dublin, Ireland

What’s the deal? In a nutshell, Ireland’s capital Dublin is a genuine cultural and historical powerhouse, despite its relatively pocket size.

So how do you get there? The most environmentally-friendly way to travel from London, if you have time, is the four-hour train to Holyhead in Wales then a three-hour ferry over the water. Or, of course you can fly; about an hour.

So what goes on there? You could probably spend an entire day flitting in and around Trinity College, with its famous Book Of Kells, which dates back to 1592.

When you’re done, stroll down Grafton Street to pretty St Stephen’s Green (make sure you read up on its fascinating history), before a stop for lunch in the buzzy South William Street area. The party-strewn streets of Temple Bar, our main picture, with its galleries, decent restaurants and boutiques, are moments away,

What other neighbourhoods are worth exploring? The Docklands area is well worth the walk from the city centre, with its gleaming blocks, photogenic waterside reflections and striking Bord Gais Energy Theatre.

Hop over any of the eclectic bridges – the striking 120-metre Samuel Beckett, which opened in 2009, is pictured above – and the northside is a treasure trove, too: don’t miss the Hugh Lane gallery, with its reconstructed Francis Bacon studio, and Capel Street, lined with excellent restaurants, pubs and bars, including PantiBar, one of the city’s best LGBTQ venues (the biggest is The George on the southside).

Nearby Stoneybatter is a gem too, home to one of the capital’s best food pubs: L. Mulligan Grocer. Opposite is friendly newish cafe Social Fabric (pictured above), and another pub, Walsh’s, also well worth stopping at. Or try brunch spot Wuff, packed on Saturdays.

Is Dublin 8 worth the hype? In case you missed it, the Liberties area – Dublin 8 – was named the 15th coolest neighbourhood in the world this autumn by Time Out magazine. Main vein Meath Street is lined with appealing artisan cafes like Legit Coffee, Bakeology and Tasty 8, while Lucky’s bar boasts pizza and craft beer.

An essential stop in this neighbourhood, past Guinness Storehouse (incidentally, Dublin’s most popular attraction) is IMMA, or the Irish Museum of Modern Art, pictured above. This world-class contemporary art gallery is housed in an imposing former 17th century hospital: on my visit an impressive queer-themed exhibition boasted big-hitters Gilbert & George, Wolfgang Tillmans and Derek Jarman, amongst others.

I’m hungry now. Where should I eat? The city is a stronghold for both expensive fine dining as well as cheaper options. This time, staying solo in the city centre, I went budget-but-healthy: highlights included the simple chicken kokoro torisho at The Ramen Bar on William Street; Sprout & Co’s Middle Eastern-style mezze salads on nearby Exchequer Street; the healthy wraps at Tang (also: top coffee and energy balls) opposite St Stephen’s Green; and the signature yaki soba at locally acclaimed Yamamori South City on South Great George Street.

How about a pub crawl? Are you kidding? It’s a national pursuit here. There are quite simply too many beautiful pubs to mention, but perhaps special mention should go to the Long Hall on South Great George’s Street, which dates back to 1766 with an interior that’s remained unchanged since Victorian times.

Nearby is popular arty local pub Grogan’s, which occupies a corner spot good for people-watching. Over on Parliament Street towards the river is Street 66, an LGBTQ bar I frequented with a lively pavement terrace; cross over the Liffey and at the top of Capel Street is craft beer hangout the Black Sheep, home to some fine IPAs from Galway Bay Brewery.

A day trip? On previous visits I’ve enjoyed the coastal towns of Dalkey and Howth, both short hops on the Dart, the latter especially lovely. This time I actually stayed with an old friend for a few days in Malahide, an affluent commuter village on the edge of the estuary that’s 20 mins from Connolly station, with spectacular views over the marina and, a short walk away, some stunning beaches.

Its atmospheric central thoroughfare boasts charming pubs like Gibney’s, and there are acclaimed and expensive restaurants aplenty: we enjoyed confit duck dim sum and some terrific Black Angus rare fillet at local classic Bon Appetit, and tasty prawn tacos at the Fish Shack. A cluster of streetfood vans and a coffee truck can be found on the harbourside, too.

Another brilliant excursion, just 50 mins on the Dart, is Bray. Read our guide to that coastal resort here.

Where can I stay? Your best bet is probably to go to the Booking.com app, depending on your budget. I managed to get an acceptably clean and very central double room at the Belvedere Hotel, near Connolly station, for around £60 a night.

Find out more about Dublin on the Visit Dublin site here.