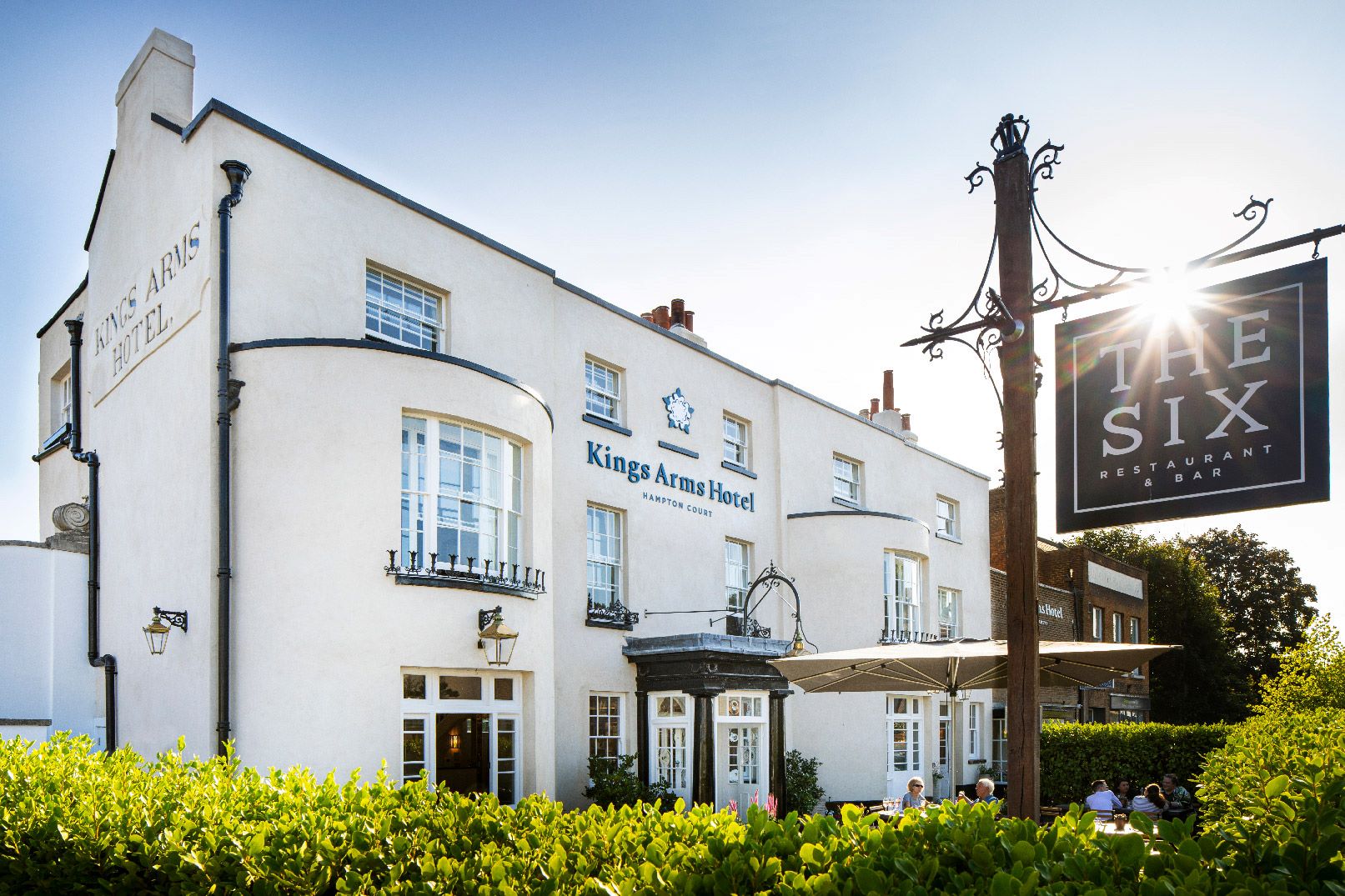 Where exactly is it? Hampton Court, Zone 6: the station’s on the suburban line from Waterloo (around half an hour) so Londoners can tap in, tap out. The hotel itself is five minutes’ walk from Hampton Court Palace and on the edge of its grounds – it even overlooks the famous maze – right by the entrance to rural Bushy Park.

What is it? An imposing white Georgian pile (pictured above) that dates back to 1709, the inscription still visible on the wall. As Queen Anne was on the throne, the inn was first named the Queen’s Arms, but by 1772 it had changed sex to the King’s Arms, with King George the Third in power.

Some more history? Go on then: it’s been in existence as a pub, a hotel or an inn for longer than any other business in the area. Two widowed sisters, Mary Spurling and Mary Johnson, originally acquired the only grant of land from the Palace estate in 1648: in those days, small scale brewing was typically done by women, and it was probably used to set up a business selling beer to staff, gardeners and soldiers.

The interior and vibes. Fast forward a few centuries and the pub was refurbished in 2019, just before Covid, into a 14-bedroom boutique hotel, with twinkly cocktail bar and elegant restaurant, all blond wood floors, wishbone chairs, Carrara marble tables, deep navy banquettes and antique glass deco lights. Just outside, a hedged alfresco dining terrace is a sun-trap (although our visit, sadly sodden with rain).

What was good about the rooms? Each is different in shape, size and design: ours, at the front of the hotel, was spacious with two sash windows, an exuberant splash of modern art, a sofa and armchairs, plus the all-important luxuriously comfortable bed with quality bed linen. Naturally the refurbished bathroom was big, with earthy pale pink tiling and with rain-shower, plus there was plenty of posh tea and coffee, as well as a carefully stocked mini bar.

And first off, the chefs are amenable. The friendly server suggested that they whip up my vegan friend their own plant-based takes on some of the menu dishes. Her Nutbourne tomato consommé was especially moreish, with violet artichokes, pasta, basil, spring onion and fresh peas; while a dairy-free take on the Palace Garden salad, with vegetables sourced from the bountiful plots at Hampton Court Palace, proved a pretty tangle of pak choi, griddled courgettes, French radishes, sautéed mushrooms on a rich, summery pea puree.

I opted for two non-vegan dishes – less improvised, obviously – which both excelled: a small oblong of charred BBQ Devon monkfish was matched with a winningly balanced salsa of beetroot, caper and orange, a touch of fire from the horseradish crème fraiche; and aged Welsh lamb rump came pillowy pink, with a deeply savoury spiced lamb breast pastilla and skinny carrots, the plate’s light Middle Eastern feel underlined by cashew dukkah and garlic buttermilk.

Desserts? I rated the iced peanut parfait with a dark chocolate and cardamom cremeaux, with a surprisingly tasty roasted banana topped with honeycomb and kaffir lime. The vegan option paired zesty raspberry sorbet with candied pine nuts, champagne strawberries and a strawberry syrup – and somehow, still managed not to be too sweet.

What’s the service like? It was peak August end-of-the-world apocalyptic weather on our visit, with the river flooding a couple of local pubs nearby, so the restaurant was quiet – but the service attentive and friendly throughout.

To drink? We stuck to the one-above-the-house-red, a decent Argentinian Malbec (£24). But there are usual local craft beers and cocktails. And that terrace! If the sun shines on your visit, get stuck in.

Don’t miss: Hampton Court Palace obviously (£25 entry fee), but also Bushy Park is a must, the second largest of the Royal Parks at over 100 acres, where over three hundred deer roam freely, with the Diana Fountain also a five-minute walk away. Cross Hampton Court Bridge and stroll along the river to picturesque Molesey Lock, which dates back to 1814 and was once the most popular lock on the river, all promenading blazered men and women twirling parasols.

A neighbourhood mooch? Nearby is the dining and shopping hub of Bridge Street, or Hampton Court Village as some call it, a lovely thoroughfare of independent boutiques, galleries, restaurants, artisan cafes (Henry’s Kitchen is recommended) and second-hand and vintage stores (try the capacious Emporium). A couple of good pubs too: The Albion, for craft beer, and family-friendly Prince Of Wales. For waterside drinks try the historic Hotel Mitre, with its decked terraces, while the Mute Swan – scene of the floods on our visit – has craft beer from nearby Twickenham.

Weekendr stayed as guests of the King’s Arms Hotel. For more on our hotel reviews policy please see our About section.