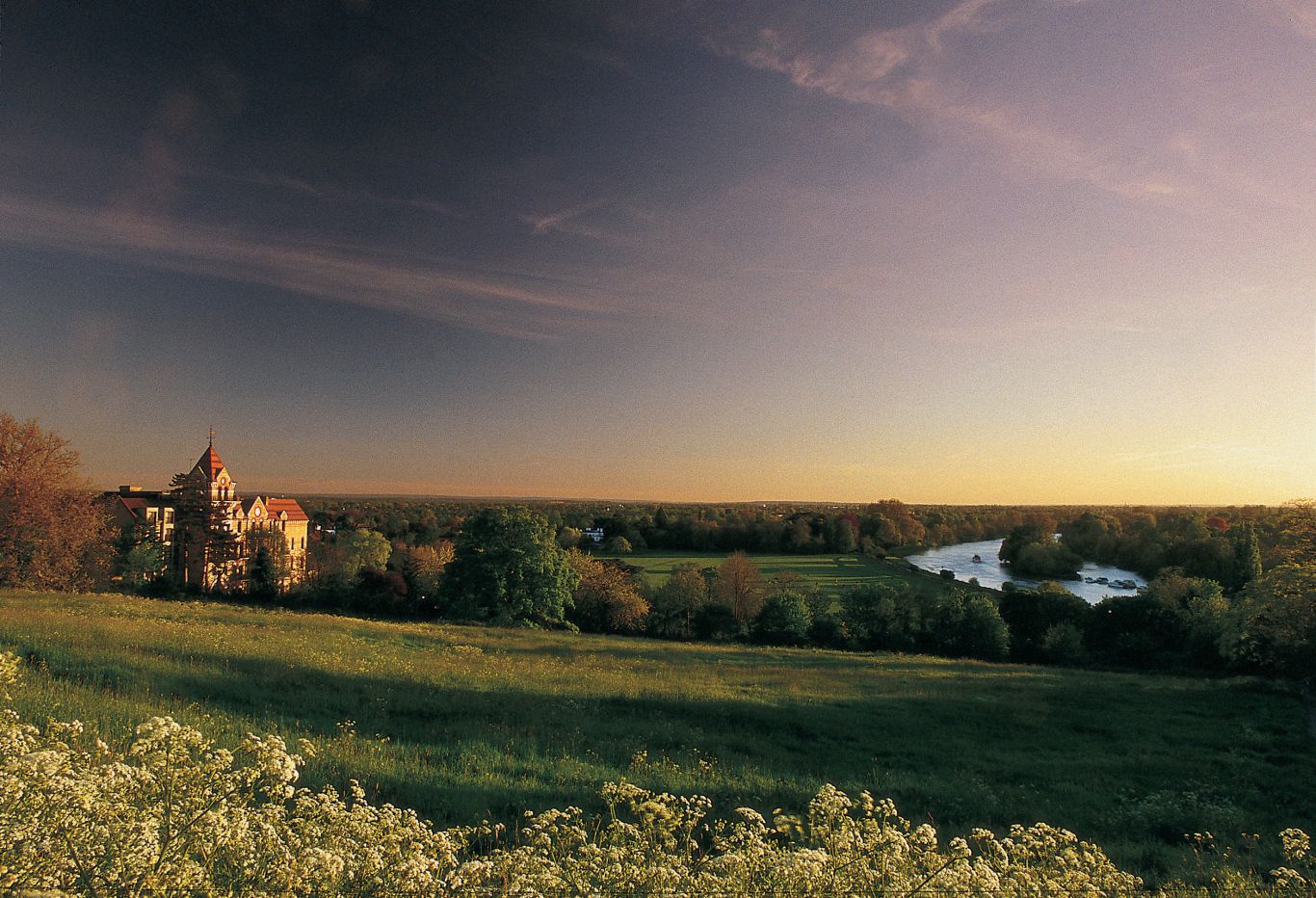 With its advantageous position overlooking the famous bend in the Thames, Richmond couldn’t be easier for an overnight trip if you live along the capital’s orange Overground line: it’s the last stop west.

Scenically, it feels much further away. On a midweek morning, with the bustle of its boat-building yards the only noise breaking our quiet riverside contemplation, it’s at its most picturesque where the Thameside path meets the watery meadows.

Just above here sits the Petersham Hotel, on the mythical-sounding Nightingale Lane, its name derived from songbirds deified by Wordsworth in his sonnet June 1820. There really can’t be a better location in London to feel like you’ve escaped the capital – while somehow being usefully still in Zone 4.

The history of the landmark building is interesting enough: in 1863, a smaller original house was acquired by the Richmond Hill Hotel Company, who employed architect John Giles fresh from his work on the Langham Hotel in Portland Place. With its tower, high pitched roofs and many balconies, the new hotel’s imposing structure was described at the time of its opening as ‘florid Italian Gothic’.

And that just about sums it up. Stepping inside, we’re instantly confronted by the awe-inspiring Portland stone staircase, reported to be the tallest unsupported stone staircase in the country. Look up: the paintings on its ceiling are by Ferdinando Galli, an Italian artist who exhibited at the Royal Academy in 1866.

But the hotel’s enduring success has to be because it gazes out so thoughtfully across Petersham Meadows and that bend in the Thames. One of the capital’s great views (along with those from Parliament Hill, Primrose Hill and Crystal Palace), the meadows were protected from development by an Act of Parliament passed in 1902 (and renewed a century later). They’ve been immortalised by a slew of artists including Sir Joshua Reynolds and J.M.W Turner, who lived across the river in Twickenham.

On our visit all the river-facing bedrooms were booked out, but a smaller side room was comfortable enough. On a warm afternoon, its big sash window open, the sylvan aspect was appealing, with birds tweeting, and even the rattle of an occasional woodpecker, although we had a slight envy of the lovely wrought-iron view-commanding balconies. Still, a bathroom with decent shower and comfy towels made a play for a distraction.

While the hotel is majestic, the dining room, a late 1950s extension facing the river bend, is rather low-ceilinged; it’s worth booking a table by one of the large windows to drink as much of the view in as possible. Fizz in hand, we enjoyed a spectacular orange, red and purple sunset, the atmosphere all around us quite old-school, all burnished mirrors and punters dressed up for dinner. What the restaurant doesn’t quite make use of is the lovely terrace directly above it, for sole use by the function room: that seems a shame.

Anyway, head chef Ade Adeshina prepares a decent array of modern seasonal British dishes, including a set menu (£23 for two courses) and a la carte (around £40). Cooking is more cutting-edge than expected: a square of unctuous pork belly was elevated by baked apple, a sweet carrot puree and the strong hit of gorgonzola gnocchi; while a crab lasagne proved a miniature flavour bomb, a powerful hit of umami coming from its crown of buttery Lilliput capers in tarragon sauce.

Desserts peaked with a chocolate three-way romp (truffle, mousse and brownie) with added crunch, crumb, honeycomb and pistachio ice cream. A delight: you’ll need to hike back up the hill afterwards, as we did.

The only real surprise, in fact, was at breakfast. “The chef’s going to scream at me as it’s off-menu,” said the waiter when we asked for smoked salmon and poached eggs after surveying the rather filling, meat-heavy list of Full English-style options. “But”, he added, “I’ll fight your corner.”

And so he did. The plate, its yolks orange, was very edible indeed, although – let’s face it – significantly less skillful than theprevious evening’s well-choreographed dinner. Not to mention sunset.

1. The view from The Terrace
Climb the lane or walk straight up the steep common to the highpoint called The Terrace. By the mid-17th century there was already a seat on the hill from which to admire the view, with the promenade first laid out in 1700. Visit as the sun sets, when a polite crowd of revellers will be gathered in front of the Roebuck pub, drink or three in hand, to watch the orange glow spread across the ancient landscape and the river beyond.

2. Petersham Nurseries
A dusty path across the meadows leads to the destination made famous by chef Skye Gyngell. The glasshouse restaurant is filled with bougainvillea, ferns, Indian art and a sandy-swept floor creating a colonial feel. Gnocchi come with wild garlic and pecorino, tender hogget chops with salsa verde, and a juicy pork Milanese escalope with braised chard. It’s farmhouse style cooking that underlines how ‘un-Londony’ Petersham feels. Ten minutes’ walk are the semi-wild spaces of Richmond Park.

3. A town wander
Richmond is a daytripper’s delight: besides the big chain restaurants on the water, small indie cafes, shops and bars line Richmond Hill and along the narrow lanes leading down to the Green. One lovely pub is the White Cross, whose waterside terrace is a sun trap, while former stables the Rose of York is the nearest inn to the Petersham Hotel itself.

The Petersham Hotel, Nightingale Lane TW10. Double rooms start at £90. For more info on prices and seasonal offers head to their website here.