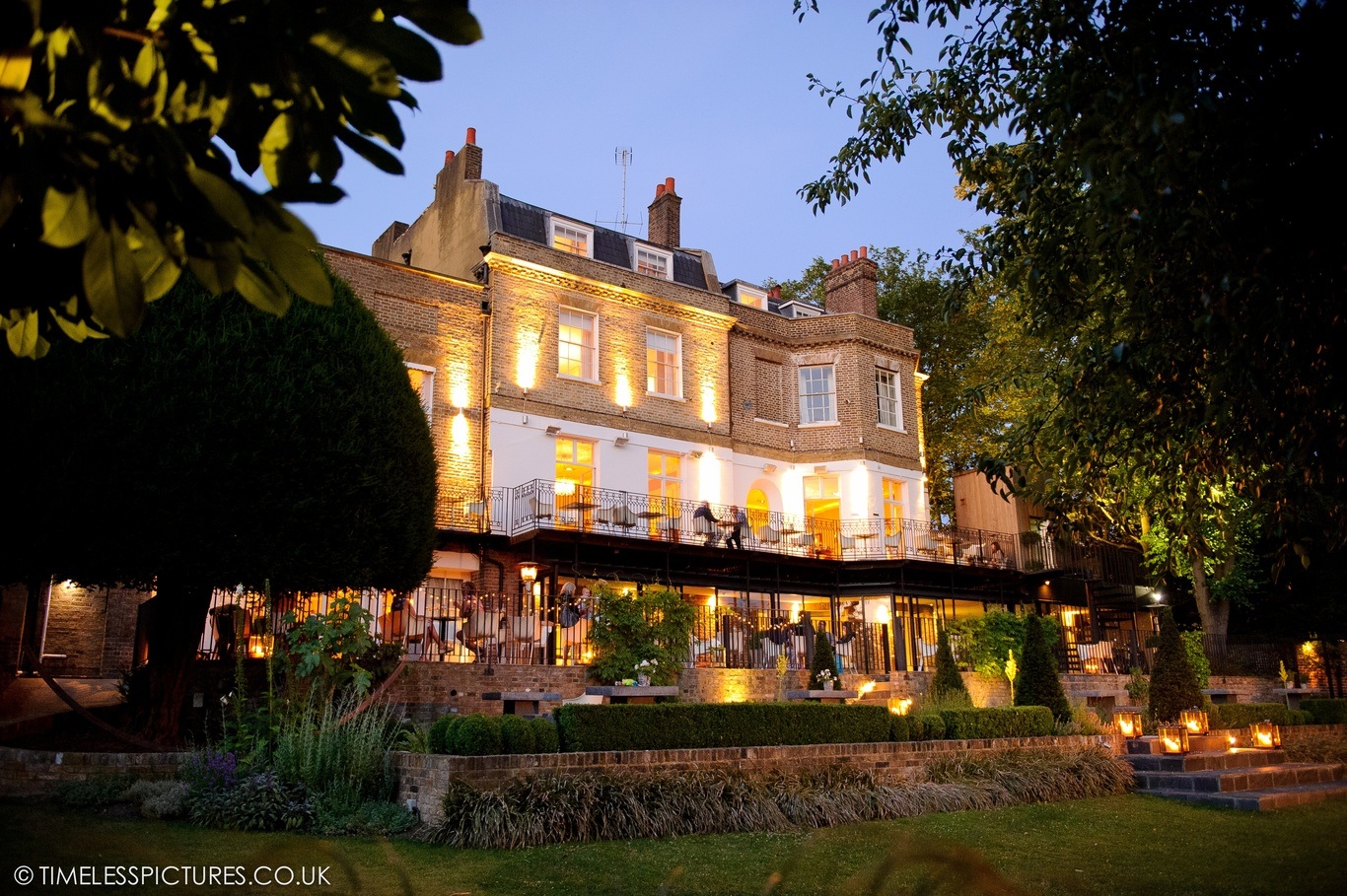 Where exactly is it? On the banks of the Thames, The Bingham (now rebranded as ‘Riverhouse’) is a few minutes’ walk along the towpath from the 18th century stone-arch bridge – and yet not quite as far as timeless Petersham meadows, where cattle still graze for six months of the year.

The interior: discuss. Previously that rather dated entity “the luxury hotel”, it’s now reinvented itself as something more hip, inevitably with a touch of Soho House about it. So there are deep jewel-coloured walls in the laidback reception area, and pastel-pink panelling in the airy bar, where aproned mixologists create libations at a marble-topped counter in front of shelves lined with obscure spirits. Colonial touches abound, such as wicker stools and chairs, as well as abstract contemporary canvasses, big fireplaces and a dining room with row-upon-row of colour co-ordinated Penguin paperbacks. The succession of public rooms showcase floor-to-ceiling Georgian windows, with French doors onto an enviably positioned river-facing terrace.

What’s the backstory? Originally built in 1740, its most notable residents were Katherine Bradley and Edith Cooper (from 1899-1914), who wrote love poetry under the collective pseudonym Michael Field. The tale gets a little racy when you learn that Katherine and Edith – aunt and niece – were lovers, and the inseparable pair entertained many literary visitors at Bingham including W.B Yeats.

Wowsers. And then? Fast forward to 1984 and it was acquired by the Trinder family, who still own it, and commissioned the recent refurbishment by award-winning interior designer Nicola Harding.

What’s good about the rooms? All 15 have been completely rethought, with many boasting watery views. Ours was spacious, dominated by a king-size bed on a plinth, the organic mattress insanely comfy. There were reclaimed 1950s chairs, big velvet drapes and books casually bound in string (perhaps in honour of the loved-up Katherine and Edith). We obviously had to try out both the walk-in rain shower and the freestanding copper bath tub, the latter offering a perfect view of the telly during a soak with a posh leaf tea. Best of all was, of course, the view from our small balcony: it stretched across the gardens to the bankside willow trees and the glassy river beyond.

Anything on the snagging list? Not really: the room was even dog-friendly, so our aged pooch dozed contentedly after running up and down the towpath all afternoon.

OK, let’s talk food. Awarded three rosettes, there are various menus from head chef Andrew Cole (ex-Great Eastern). The cheapest is the weekday lunch (Mon-Sat) at £26 for two courses, or there’s an evening a la carte at £37. We ate during Sunday brunch, where two rather lunchy courses cost £35.

An essential dish? Pan-fried hake, its skin seared crisply and flesh opaque: the bright green of the torched cucumber and a vivid orange bouillabaisse reduction, with its smooth Provençal flavour, really popped on the black earthenware plate.

And to start? A vegan small plate of Jerusalem artichoke, cep, smoked almonds and hazelnuts (below left) matched crunch with a sweet, nutty earthiness; while another, seared scallop (below right), was butter-soft, studded with crumbled black pudding, cauliflower rice and musky black truffle. Even a potentially filling-sounding pork belly main was a light, manageable medallion with salsify, sprouts, chanterelles and a wee hillock of sweet potato mash.

Should we order dessert? Hell, yes – it’s only £3 more per person on the set menu. Most delish was a raw clementine cheesecake with pecans, dates and citrus sorbet, while a circular bitter chocolate mousse upped its game with a seasonal hit of blood orange in both accompanying jelly and sorbet.

What’s the service like? Relaxed, in fact the meal was incredibly languid, with some just-too-long waits between courses. But the day was glorious, the windows and doors wide open on to the terrace, so we idled with a glass of chilled Côtes De Provence as all around us couples and groups toasted the strangely eerie February heatwave.

Any other facilities? No, other than the loungey bar that serves a mean negroni, and the spacious garden to float about in between meals.

Where else should we visit in Richmond? If you’ve never eaten at the famous Petersham Nurseries, a lunchtime table or coffee-and-cake is a must. And a climb uphill to The Roebuck pub at sunset is another: the panoramic aspect over the winding river means the leafy promenade is packed with couples – and smartphone-wielders.

Some other tips? After a wander round the indie boutiques on nearby Richmond Hill and down in the network of attractively narrow lanes, order an espresso at characterful beans merchants Coffeeology, or perhaps a rare steak at neighbouring grillhouse Buenos Aires. It was very popular, even on a Sunday evening.

And pubs? The Tap Tavern, in the backstreets, is a good craft beer joint, or for a riverside pint the White Cross boasts a large terrace, while The Cricketeers has a view over the age-old matches on Richmond Green. In short, it’s like a waterside city in miniature, really.