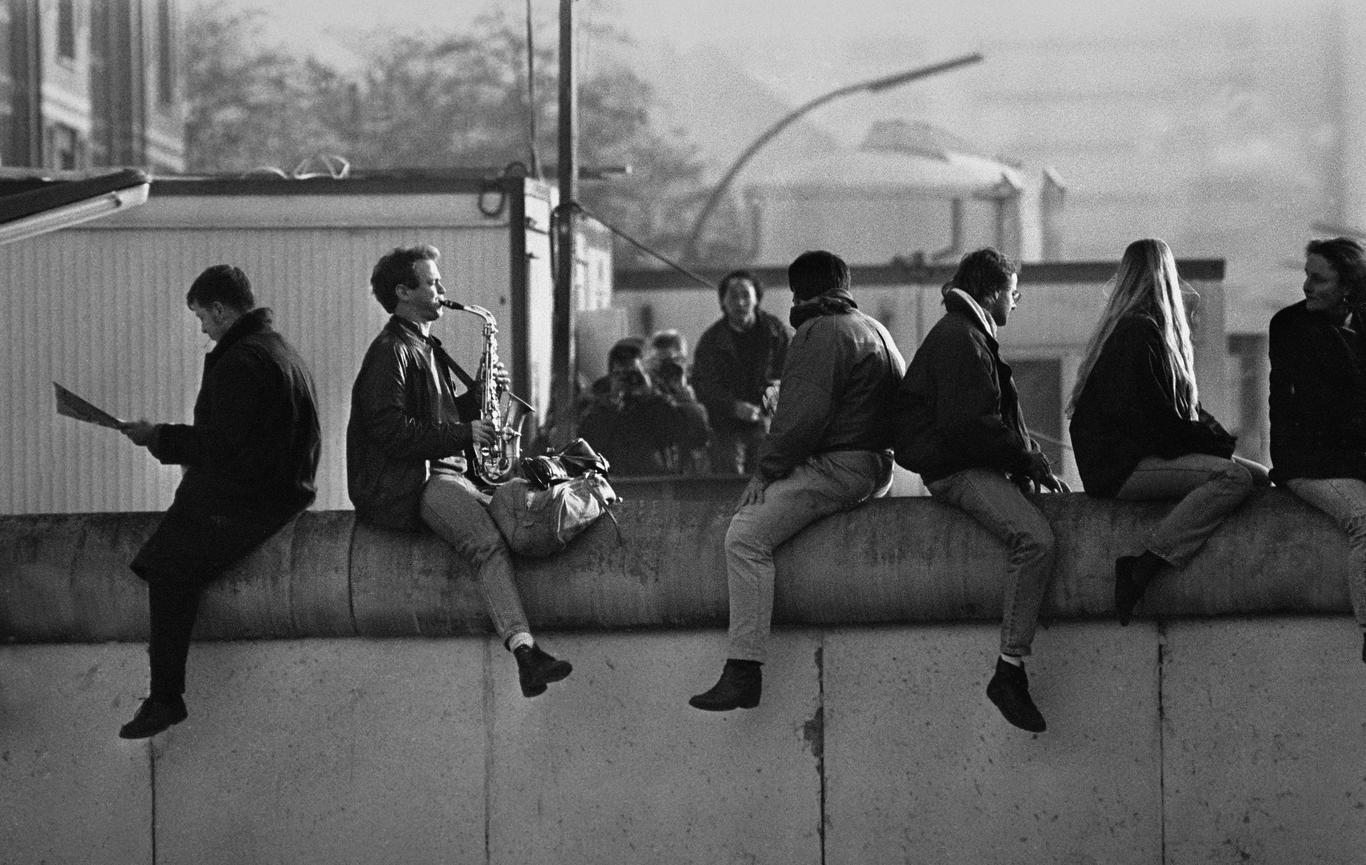 Berlin stories: marking the 30th anniversary of the fall of the Wall

‘There were banana peels everywhere!’ Kati laughs as she remembers the day the Wall fell, and East Berliners went crazy for the forbidden fruit. ‘Seriously, though,’ she says, ‘you spend your whole existence fighting against a regime, and then it changes. Yes, something you’ve always wanted is suddenly there, but you have to rebuild your life.’

I’ve come to Berlin to uncover personal stories about the GDR – the Wall, the Stasi – for a snapshot of life pre-1989.

But I want to start by tracing a section of the Wall – or, as the GDR called it, the ‘anti-fascist protective measure’ – whose 43 km route is now a marked ‘leisure route’ (look for the Mauerweg signposts).

Glorious autumnal skies hang over the Hamburger Bahnhof, a former railway station turned contemporary art gallery, but the stone at Sandkrug Bridge, which commemorates 24 year old Gunter Litfin – the first escapee to be shot dead in 1961 – lies in cold shade, the sun dazzling the Humboldt harbour behind.

Maybe it’s the blue sky, or the sandy tree-lined path, but, as I follow the northern border of Mitte, I’m having trouble imagining the horrors of the death strip.

It’s no easier as I reach the first section, elephant-grey with painted white squares, which once divided the Invalidenfriedhof graveyard, where today elderly tourists in coloured waterproofs relax under the trees.

Laughter echoes all around as I read that the headstones of graves in the death strip were removed so as not to impair the sightlines of border guards.

But at Bernauer Strasse the regime’s horrors become all too clear: this is a partial reconstruction of the Wall in its original condition, and from a viewing platform at the Dokumentationszentrum, its impact on a single street is vivid. Divided in the middle, there were frantic scenes in 1961 as people trapped on the eastern side jumped to their deaths from windows.

Today, along the length of grey concrete, couples pose smilingly in front of the wire protective fence for selfies, and wooden crosses poke out of low sand hills behind.

Back down on the pavement, I pause outside the Chapel of Reconciliation: Berlin is continually apologising, or remembering in one way or another, and an exhibition informs us that the memorial is being extended with a ‘window of memory’ for all 152 victims.

So, in nearby Mauer Park (or Wall Park, once the heavily guarded Death Strip) it’s refreshing to see kids disregarding history altogether, busy at work graffitiing stretches around the former GDR stadium, alive with swirls of colour.

‘My father was obsessed with being watched by the Stasi.’ Thankfully t’s still sunny and I’m sitting with thirtysomething Kati outside the café at the IMA Loft Apartments complex in Kreuzberg, where I’m staying. ‘He was a car mechanic and would come back from the pub, announcing that we were leaving each night.’

They never did leave East Germany, however, even after 1989, but his death prompted her to investigate whether the GDR’s ‘shield and sword’ had in fact kept a file on him at all.

‘There was nothing,’ she says, almost sadly. ‘I was disappointed because it made me feel that his long-term obsession had been in vain.’

I’m curious to find out more, so the next day, after again visiting the famous East Side Gallery, at 1.3km the longest open-air art gallery in the world – the Trabant breaking through (above) is still breath-taking – I take the tube to Lichtenberg.

Home of the Stasi HQ Museum, and headquarters of Erich Mielke, the Minister for State Security, his operation perfected the idea of the surveillance state: there was one Stasi officer for every 63 people, and a rumoured one informer for every seven. I dismount at Magdalenenstrasse station, as veiny men drink on tables outside an off license; a stark contrast to the leafy wealth of other Eastern areas like Prenzlauer Berg.

The Stasi HQ’s cappuccino façade looks tired under thickening cloud, and inside, a strange atmosphere pervades the atrium. The man behind the counter seems burdened with the weight of the place and gruffly refuses to offer me anything to read in English.

On the first floor a range of bugging devices – for handbags, bins, even logs – offer clues as to the practicalities of surveillance.

But it’s the 2nd floor, Mielke’s private quarters, which is so captivating, preserved as it was on January 15th 1990, when demonstrators took possession of the building. Formica tables and yellow-beige chairs sit in the half-light of shutters drawn.

Empty filing cabinets, their doors flung open, recall the day the Wall fell, when files needed to be shredded fast. Beyond a rope is Mielke’s private tiled bathroom, and a red check quilt is folded enigmatically on a day bed. The place is empty.

In the cafeteria I sit on a vinyl chair and watch a Stasi documentary in German, sipping coffee from a plastic cup. The air tastes stale; this place is as eerie as the plastic pansies that adorn each table.

‘You lose your identity, no matter how difficult that was before. Of course it was a good thing,’ Kati tells me later. ‘I’ve lived in New York and London which would have been unthinkable. But the phrase you hear often amongst people in East Germany is, ‘it wasn’t all bad.’ People can’t say it was, otherwise it negates their whole existence.’

The next morning is overcast. I head to the excellent Schwules Museum, one of the biggest LGBTQ museums in the world, to uncover stories of queer Berliners and the Wall, and am then pointed in the direction of a once-secret society called the Sonntags-Club in Prenzlauer Berg.

Founded in 1973, the club’s name (Sunday Club) reflected the GDR’s ban on ‘organised homosexuality’, forcing the group to meet initially in a basement in the suburb of Mahlsdorf.

When I arrive at the Club, now an LGBTQ café/bar-cum-community centre, there is an immediate problem: its co-founder Michael Unger can’t speak English. I sit on a red plastic chair in crepuscular light, and stare at peach walls until an interpreter arrives.

‘Just being gay wasn’t a reason to be under surveillance, but getting organised was,’ he says, finally, pulling his moustache. ‘So, yes, I had a file in the Stasi. I found out afterwards I was watched by a gay friend.’ He shakes his head. ‘I was surprised and angry.’

On the day the Wall fell, 9th November 1989, Michael was at work, a scriptwriter for East German TV: ‘It was unbelievable to see it,’ he says. ‘But suddenly there were other important things to deal with. I lost my job because the TV station went down.’ He brightens. ‘But yes, though, my life as a gay man is of course much easier now.”

It’s late. Walking back to Kreuzberg amidst the bleep and hum of the traffic, I wonder whether this anniversary is about reflection more than anything else.

‘It’s a continuing thing,’ said Michael back at the centre. ‘It wasn’t suddenly paradise.’

For more info on the Berlin Wall, the museums and locations mentioned in this article, and the city in general, see Visit Berlin.