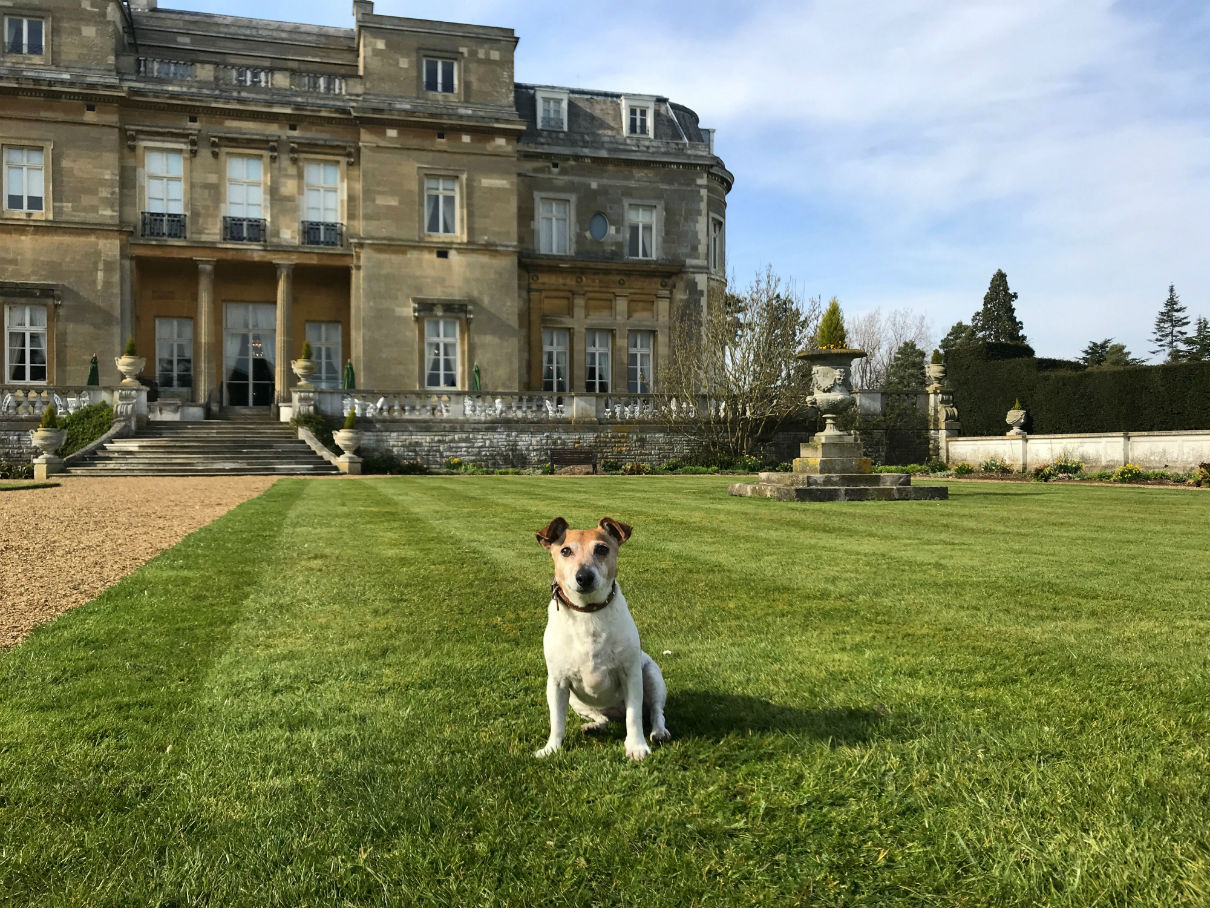 What’s it like taking a senior dog on a luxury hotel break?

My lovely old Jack Russell is nearly 14. Most of the time, when my partner and I go away, we either rent a doggy-friendly holiday cottage or drop her off with a willing mate (she doesn’t really ‘do’ kennels.)

Of course she’s been dragged along to the odd hotel over the years, and sometimes behaved herself, sometimes not. There was, for example, the time at the boutique b&b when she barked at every person passing outside our room. And another when, as we ate dinner, the waiter leant over with a quiet word in our ear that there had been complaints. Oops.

To be honest, that was probably her swansong. Until, that is, we heard about the tenth anniversary of Luton Hoo, and its canine-friendly garden rooms. It’s one of those grand old piles perched in the home counties – Bedfordshire, to be exact – a short train ride from north London, but Another World.

The mansion house, complete with Doric-style pillared entrance, dates back to 1767 in its current incarnation, although the site is ancient – hence the old Saxon word ‘hoo’, meaning spur of a hill.

And the parkland, laid out by Capability Brown, is glorious, a thousand acres of rolling green, encompassing woodlands, meadows and formal garden, which wll make you re-enact every costume drama ever (its cinematic credentials are strong, with movies like Never Say Never Again and Four Weddings And A Funeral filmed here). There’s also a hidden rock garden awash with ponds and streams, while the majestic serpentine lakes lie beyond, man-made from damming the River Lea.

Which brings me back to our lovely old Jack Russell. Using the hotel’s handy map trail, our afternoon hike – and it really does qualify such a word, as you can rack up miles exploring the grounds – proves a real highlight for her, ancient paws rejuvenated on springy moss, nose moistened by the smells and sniffs of the historic landscape.

In the near distance we watch mallards waddle by the water, pheasants idly pecking on the lawns – and is that a muntjac frozen between the towering pines? The long walk also wears her out, so we can feel confident she’ll be snoozing contentedly in the room later on.

Ah yes, the room. The hotel is so dog-friendly that not only is it on the ground floor of the 19th century former servant quarters, it boasts French doors that open onto a rather delectable courtyard garden. Perfect to let her out easily for a sniff and a night-time wee (not a poo, of course; we’re careful to take her for her usual toilet walks).

And both she and we are delighted with the hospitality afforded her upon arrival: bags of quality treats, superior food cans, a squeaky bone (which she instantly takes to), plus a big bed and selection of bowls.

And what about us humans? We fare pretty well too, as it happens. With dual aspect windows, the room’s spacious, with a bed that’s probably a kingsize deluxe, and linen and pillows so comfortable (with blackout curtains so dark) that we doze far later than normal, despite the just-audible rumble of planes taking off at nearby Luton airport. And the hound doesn’t wake us up at her usual crack-of-dawn o’clock, either.

Why? Because sure enough, the cunning plan works: she’s exhausted after the two-hour run around, allowing us to take an early evening swim in the Scandi-style pool, and enjoy a pre-prandial pint in Adam’s Bar (there are, in fact, a handful of drinking and eating spots dotted around the parkland).

Before dinner we sip a gin and tonic in the lavish high-ceilinged bar, where a pianist is tinkling away. Of course he is. And it’s no effort to admire the impressive Wernher art collection (including major artists like Joshua Reynolds) lining the walls of the downstairs rooms, along with cabinets stuffed with Churchill memorabilia. After all, Luton Hoo was used as a tank-testing ground in the Second World War.

As for the ballet-like service in the marble-walled Wernher Restaurant (named after the diamond magnate who bought Luton Hoo in 1903), it’s resolutely old-school, but why not? We’re seated by vast windows gazing out towards the lakes, surrounded by Beauvais tapestries, candles flickering on the tables. Fish knives glisten, and shiny silver cloches are removed theatrically from our mains simultaneously.

The set dinner menu is officially three-course but, with amuses bouche and palate cleansers, feels longer. Colourful plates include starters of treacle-cured salmon, with horseradish and pickled fennel, and a terrine of chicken – deemed ‘coronation’, as you might expect at a place with regal connections – offset by a note of sweetness from mango gel.

Our favourite dish is dessert: a slither of caramel chocolate tart, with fruity notes of passion fruit and mango yoghurt sorbet. We’re a little less keen on the main, however, a fillet of rosy sea trout, adorned with a crown of sea herbs that are slightly woody at the tips, although it’s salvaged somewhat by lime-coloured watercress gnocchi and the briny hit of trout roe, with an intense, but not sour, preserved lemon dressing.

Next morning, we’re back in the dining room for breakfast, eggs any-which-way plus a continental spread of pastries, fruit, smoked fish and ham.

As for our old girl? She’s busily tucking into her special treats in the room – before one last rejuvenating gambol over the lawn.

And hallelujah, for once there hasn’t been a single bark out of place.